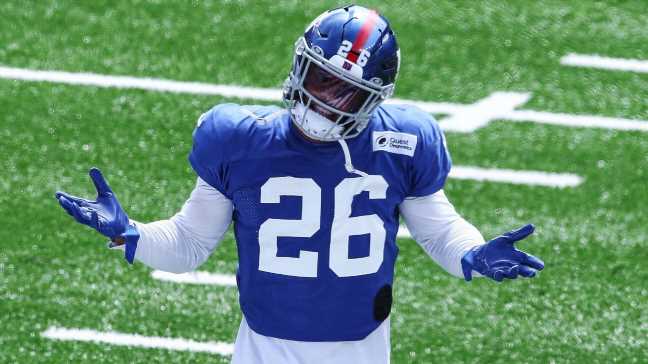 NORTH CALDWELL, N.J. — New York Giants running back Saquon Barkley’s knee is feeling “pretty good” after ACL surgery last year, but there is still uncertainty how much he will do at training camp and if he will be ready for Week 1.

Barkley said that is not a conversation he has had with coach Joe Judge.

“I don’t know. We’ll see,” Barkley said with a smile at his annual Saquon Barkley Football ProCamp at West Essex High School when asked if he expected to be full-go at the start of camp.

“I don’t know. We’ll see,” he repeated. “Taking it day by day. Just listening to my body. Whenever I’m able to get out there, just make sure I’m 110%. Not just for … my well-being, but just so I go out there and compete at a high level and show the world who Saquon is.”

Barkley is not expected to be full-go for the start of training camp, a source told ESPN last month.

The running back was moving well and even competed against some of the 200 kids, grades 1-8, in attendance Monday in 1-on-1 drills. There appeared to be no restrictions.

This was, kind of, the plan.

“I’m a big kid at heart,” Barkley said. “We were talking to see about how much I could do. I said I’m just going to go with the flow. I said probably my kid at heart would take over. Just have fun. And it means a lot. I’m just happy these kids came out. I thank the families for making these kids come out. I want to make sure that I leave a lasting impression.”

Barkley was among a group of prep and college football coaches working with the kids. His involvement was evident, despite still rehabbing the injury.

Barkley and the Giants have been reluctant to put a timetable on his return ever since he suffered the injury in Week 2 of last season.

The Giants open the regular season against the Denver Broncos on Sept. 12, nearly 11 months after the major surgery on Barkley’s right knee. He also had MCL and meniscus damage.

“Kind of have to play that by ear,” Barkley said of his expectations. “When it comes to rehab, rehab is never a straight line. Just play that by ear. Listen to your body, and whatever your body is telling you, go with that.”

The Giants aren’t going to put Barkley on the field in live situations until he is 100%. It’s entirely possible that might not be until October.

“We are going to make sure that we take Saquon’s rehab at the correct rate for his individual body and injury,” Judge said during minicamp last month. “It’s not any mirror of anybody else’s injury out there. We have to make sure that we let him get it at his pace and put him on the field [when he] can play 100% aggressive and confident and he’s going to play safe and he can play effective.”

The idea is to bring Barkley along slowly to make sure he is healthy for the duration of the 17-game season and, hopefully, a postseason. It could be shortsighted to have Barkley take his usual 85% of snaps Week 1 against the Broncos or in the first few games.

Having Barkley, 24, return to his rookie season form and usage in the first few weeks of the 2021 season was never realistic, though the damage to his knee has healed according to plan, sources have insisted.

Now it’s a matter of getting on the field for practice. Or more aptly, when?