There was the 7-6 loss to the Raiders in 1998, when they allowed Wade Wilson, a 39-year-old, third-string quarterback who had not attempted an official pass in a year and who had misfired on his first six pass attempts after coming off the bench in the fourth quarter, to find a streaking James Jett for the decisive 68-yard touchdown with 1:28 to play. To that point, the Raiders had managed just 18 yards rushing and 101 yards passing while punting 16 times, an NFL record that stands to this day.

There was the 2006 season and the playoff game against the Patriots, who were seeking a third Super Bowl title in four seasons. The Chargers appeared to have the game in hand when safety Marlon McCree intercepted Tom Brady with just over six minutes to play and the Chargers leading by eight, only to have McCree lose a fumble on an attempted return instead of staying down and letting the offense burn the clock. Brady threw a touchdown pass five plays later, Kevin Faulk added the two-point conversion and Stephen Gostkowski added a short field goal with 1:14 to play to give the visiting Patriots a 24-21 victory.

And who could forget Halloween night 2011, when with the score tied and a minute to play in Arrowhead Stadium, quarterback Philip Rivers shockingly lost a fumbled snap at the Kansas City 15-yard line, eliminating a chance for a game-winning field goal and allowing the Chiefs the opportunity to prevail in overtime, 23-20, before a national Monday night audience.

For the briefest of moments in Mercedes-Benz Stadium on Sunday, it appeared the Chargers would add a new chapter to their dubious lore. Already in position for a game-winning field goal with less than a minute to play, running back Austin Ekeler fumbled at the Atlanta 20-yard line and Falcons defensive lineman Ta’Quon Graham scooped up the ball before sprinting unobstructed down the Los Angeles sideline. He was at the 25, the 30, the 35, and …

Inexplicably, and without being touched, Graham lost the football. The Chargers recovered at the Atlanta 43 and, after a 22-yard completion from Justin Herbert to Joshua Palmer, newly signed kicker Cameron Dicker earned a game ball with a 37-yard field goal as time expired.

It was wild. It was improbable. It was Chargers-like. And yet it wasn’t because the script flipped from agony to ecstasy. Fact is, there is no overstating the significance of the 20-17 comeback win, which improved the Chargers’ record to 5-3 and kept them a game behind Kansas City in the loss column in the AFC West. Despite being firmly in the hunt for the division title and a playoff spot, there had been an air of disappointment and underachievement around the franchise.

The Chargers appeared to be all-in in the offseason, breaking with precedent by spending draft picks and significant free-agent dollars to upgrade the roster, adding the likes of edge rusher Khalil Mack and signing cornerback J.C. Jackson, among others. With Herbert still on a rookie deal, the message seemed to be that the time is now to make a Super Bowl push.

But three losses in the first seven games created an air of tension, if not uncertainty. Even when the Chargers won, there was controversy, like when wide receiver Keenan Allen, home nursing a bad hamstring, publicly questioned coach Brandon Staley’s decision to go for it on fourth-and-1 from their 46-yard line with just over a minute to play and the Chargers leading the Browns, 30-28, in Week 5. Herbert’s pass fell incomplete, and Staley was bailed out when Cade York missed wide right on a potential game-winning field goal from 54 yards.

When the Chargers returned from their bye last Monday, Staley reminded them that their goals were not only in front of them, but imminently achievable. The reminder seemed curious to outsiders, considering the Chargers were not drowning in despair. Then again, a team can find itself battling its past as well as its present when wounds cut as deeply as the Chargers’ have.

I asked, who was doing the focusing?

“Just outside people; there’s a focus on what’s happened before,” he said. “With us, this is just part of the NFL. This isn’t exclusive to any team. It’s hard every week in the NFL. It’s hard every week in the NFL, and we’re learning that as a club. Since I’ve been the head coach (since 2021) we’ve played in a bunch of close ones, and we’re comfortable in this space. When you have as many people go down as we have this season, and you go on the road, it’s not going to be poetic. Maybe it could be if you were full strength and had a full army out there. Maybe like in the first game for us, or part of the second game. But for us, we’ve just got to be able to fight the fight based on who we have and based on what’s happening. I think our guys are really used to that.”

The Chargers were fairly healthy last season, but this year have had significant players go down. On Sunday they were without their top two receivers (Allen and Mike Williams), starting left tackle (Rashawn Slater), No. 1 edge rusher (Joey Bosa), No. 1 cornerback (Jackson) and top kicker (Dustin Hopkins), among others. The hope is that Allen (hamstring), Williams (ankle), Bosa (groin) and Hopkins (hamstring) will all be healthy later, if not sooner. Until then, the Chargers will have to manufacture wins such as Sunday’s, when all three phases contributed down the stretch.

After allowing 10 points in the first quarter, the defense stiffened and limited Atlanta to just eight plays from scrimmage in the fourth quarter. The offense was shut out in the first quarter, but responded with 14 points in the second quarter and controlled the clock in the final quarter, running 27 plays that resulted in a pair of field goals. And on special teams, Dicker became the third different kicker this season to receive a game ball after a Los Angeles win.

Having said that, the Chargers also got some breaks. Like early in the fourth quarter when Younghoe Koo was wide right on a 50-yard attempt — he had converted on 11 of his previous 12 attempts — and then there was the fumble by Graham.

“We pick up all loose balls, so I picked it up and ran with it,” Graham said. “I kept it in my right arm going down the sideline, and it just slipped out. It’s just one of those football plays I didn’t make, and it definitely sucks; but there’s another game so it’s on to the next.”

“It’s amazing we got that ball back,” said Ekeler, who had two touchdowns (one rushing, one receiving), and finished with 71 yards from scrimmage. “Sometimes it’s better to be lucky than good, one of those type situations.”

Perhaps it was a sign that the unusual and improbable are turning in the Chargers’ favor. After all, how many times does a defensive player fumble away the football without being touched? If so, it could not happen at a better time as the next two weeks figure to be daunting, with games at San Francisco and home versus the Chiefs.

“We needed this game, especially on the road, to be 5-3, right in the hunt where we want to be as far as our goals,” said safety Derwin James. “Nothing comes easy in the NFL. You look at other teams, they go through close games, too. I’d rather be on this side of winning it, than the other way.”

It’s not often the Chargers have been able to say that. And even if they had lost the game, they would not have walked away feeling cursed, according to Staley.

“When you go 10-0 down, I think you show a lot about who your football team is (when you rally),” he said. “That’s not the first time that it’s happened this year, and we’ve been able to hang tough together and get going and finish the game playing our best. I think you saw that with our football team. Offense, defense and kicking game, it took all three phases to finish the game on the road. I’m really glad that our guys got this win, because they really earned it.” 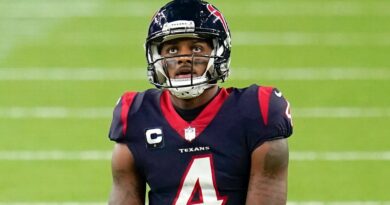