Home » NFL » Sean McVay ‘would love’ to have Odell Beckham Jr. back with Rams

The Los Angeles Rams signed Allen Robinson during free agency and traded Robert Woods to Tennessee but haven’t closed the door on a reunion with Odell Beckham Jr.

Speaking on the I Am Athlete podcast this week, coach Sean McVay reiterated his desire for OBJ to return to the Super Bowl champs.

“We would love to have Odell back,” McVay said via Pro Football Talk. “It’s one of the reasons really why we ended up pursuing Allen Robinson the way we did. I thought it was such a big deal. We all know the year Cooper Kupp had. I love Van Jefferson. He’s a really good player that’s only going to continue to get better. But then when you bring Odell into the mix last year, I thought he did a great job of really when you’ve got two guys on opposite sides of the formation based on how they want to change the math on the back end, when you’ve got a guy in a lot of these three-by-ones that can come to life and be automatic for some of those backside isolations, I thought that’s where Odell really allowed us to see how big a part of our offense that’s got to be based on the landscape of the league and some of the ways people are trying to defend you.

“He was a baller. Want to try to be able to get him back. Would love to work with him every single day.”

After forcing his release from Cleveland, Beckham signed in L.A. for the final eight games of the regular season, netting 27 catches for 305 yards and five TDs. He added 21 catches for 288 yards and two more touchdowns in the Rams’ postseason run before tearing his ACL in the Super Bowl.

With Beckham still rehabbing, there has been no rush for a club to sign the star receiver at this stage.

The Rams, who have shelled out big contracts to Robinson and quarterback Matthew Stafford and gave Aaron Donald a whopping new contract Monday, have said throughout the process that they’d love to bring OBJ back if it all works out.

The wideout even crashed McVay’s wedding over the weekend.

“Odell and I had a great relationship,” McVay said. “I mean, I love Odell. So only in Odell’s fashion could he be the wedding crasher at our wedding. He showed up and crashed the wedding. I said, ‘You crashed my wedding, you re-sign with the Rams then, man.’ That’s a given right there.”

McVay noted that OBJ looked “great” on the dance floor as he continues to rehab from surgery on Feb. 22. 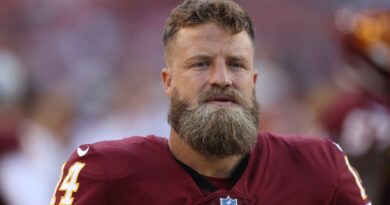