Home » NFL » See you soon, Stanley. After Avalanche’s 7-0 rout of Tampa Bay, Cup is within reach. 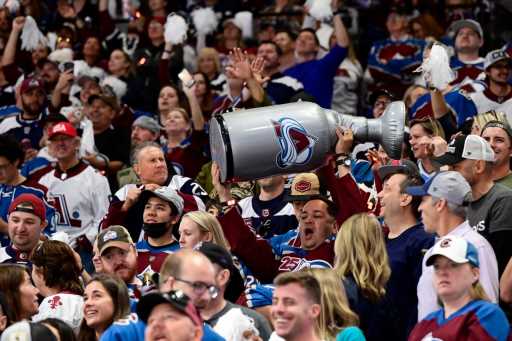 Better hurry down to your favorite Denver neighborhood hardware store. There’s going to be a run on brooms. This Stanley Cup Final won’t last long, because these Avs are faster than Lightning.

After a Cup-chasing, roof-raising, earth-quaking, booty-shaking 7-0 annihilation of Tampa Bay in Game 2 of this best-of-seven championship series, the mystery is gone. The Avalanche’s first championship in 21 years is within reach. Only two serious questions remain:

No. 1: Is there any better Father’s Day gift than scoring a goal in the Stanley Cup Final?

“As a gift?” said Avalanche defenseman Josh Manson, startled by my question. “I probably should get him something else. He wants a Blackstone grill.” Manson scored on a shot smoother than 12-year-old bourbon, in celebration of Dave, who is not only his Pops, but a former NHL player and current coach.

No. 2: With a 2-0 series lead, there would be only one downside of a sweep. You have to wonder: Has the Avalanche congregation stood together and sang the coolest hymnal in hockey for the last time this season?

With eight minutes and 50 seconds into the third period, roughly 17,849 hardy souls in Ball Arena belted out a rousing cappella version of  “All The Small Things.”

Or as Tom DeLonge, guitarist and co-founder of Blink-182, recently noted on Twitter: “We also have a song of all curse words that would sound great if done that way.”

I firmly believed after the Avs scored three times on him during the opening period of Game 1 that it was a feat Colorado couldn’t repeat in this series.

Welp. Messed that up.

But also note: I was on record record as saying if the Avs could get to Vasilevskiy for three scores during any single period for the remainder of the series, I could guarantee the Cup would be returning to Colorado. Now that’s a prediction I will stand by.

After scoring three times again in the first period, this time on only eight shots, the artist formerly known as the best goalie on the planet, is in a world of trouble. If Vasilevskiy is anything less than superhuman, you can stick a fork in Tampa Bay. The two-time defending champs are done like fried grouper.

“They’re playing at a much higher level than we are,” Lightning coach Jon Cooper said.

And now Colorado is two victories away from a championship Patrick Roy didn’t have the patience to win.

Late in the summer of 2016, Roy suddenly quit on his friend Joe Sakic and walked out on the team, in no small part because he bristled at the decision of his longtime teammate to employ a slow, patient approach in building a championship roster.

“When (Roy) left, it was just a choice. I know there was a perception that there were issues,” Sakic told me last week. “There were philosophical differences. But we didn’t have any animosity. Some people might have tried to drum some up, but we were good personally.”

The marriage of Roy and Sakic as partners on the bench and front office was never meant to last. Roy burned too hot for Sakic, forever cool as the other side of the pillow.

“I think in life, it’s better to be steady, not have the roller coaster and just go with the flow,” Sakic said. “That’s who I am.”

These Avs are built in Super Joe’s image.

What Sakic admires most about coach Jared Bednar is his unflappable poker face during games, regardless of which way the ice is tilting. “Doesn’t let anything bother him,” Sakic said. “He’s a demanding coach, but doesn’t show it on the bench, nor should he.”

Center Nathan MacKinnon has matured from a superstar who could be tough for teammates to live with in the locker room to a mentor dispensing tips at the morning skate.

Defenseman Cale Makar, drafted fourth overall in the 2017 draft, is not only mature beyond his baby-faced 23 years, but the dominant player who has changed everything for the Avs. As Cooper noted at the outset of the series, Makar and the Avs blueline is “the engine that fuels everything” for the slickest show on ice.

“We played to our identity,” said Makar, showing all the emotion of a guy that had just changed the oil of his car, instead of scoring the final two goals in a rout that blew the roof off the joint.

Asked when he last spoke with the goaltender who led Colorado to the 2001 NHL championship, Sakic had to think for a moment. “Early in the year,” said Sakic, who quickly added: “Patrick Roy is always going to be an Avalanche. He’s excited to see where we can go. He’s all in.”

Well, there’s plenty of room on the bandwagon. Grab a broom, St. Patrick. And hop on.

The Cup’s coming back to Colorado.

Miami earns shot at ACC, Playoff relevance with Clemson up next