Home » NFL » Seven questions for NFL Week 8: Will Saints get back at Vikings for ‘Minnesota Miracle’?

The NFL season is approaching its midway point and playoff races are tightening all over the league. Some contenders are separating themselves, while others are slipping down the standings. The trade deadline looms next Tuesday, and some teams may be looking to add pieces or build for the future.

Here are seven questions for Week 8.

1. Blake Bortles will start for the Jaguars. Will he finish the game? The Jacksonville quarterback was benched in last week’s 20-7 loss against the Texans, and backup Cody Kessler came in to mixed (but better) results. Sunday against the Eagles in London’s Wembley Stadium, Bortles will get the chance to revive his career, with head coach Doug Marrone announcing the fifth-year veteran will start.

Philadelphia ranks sixth in scoring defense (19.7 points a game) but is tied for 24th with only six forced turnovers. If Bortles is to finish the game, he'll have to do a better job protecting the ball. He has committed eight turnovers in the last three weeks — all losses. “It's the No. 1 priority,” Marrone said of ball security. “We are not even giving ourselves a chance right now.”

2. Will the Saints get revenge for the Minnesota Miracle? Both sides have downplayed the revenge factor over last season’s Vikings walk-off win in the divisional round against New Orleans. The reality is these two teams are different from last year’s versions, most notably with quarterback Case Keenum now with the Broncos and Kirk Cousins taking over in Minnesota.

Still, these are two legitimate threats in the NFC, and both are in first place in their respective divisions. Both squads are rolling right now, with the Saints on a five-game winning streak and Minnesota enjoying three in a row. Both have potent offenses (with New Orleans getting a slight edge in most major metrics), so the game might come down to the defense that clamps down on explosive plays and forces turnovers. A victory for either squad could build some solid momentum for a playoff run, though it’s likely we could see these two teams facing off again in January.

3. Which Mitchell Trubisky will show up for the Bears? Though he has shown flashes at times in his second season as the Bears' starting quarterback, Trubisky’s play has been quite inconsistent. That’s exacerbated further in wins and losses. Trubisky is completing passes at a rate of 10.4 percent higher in Bears victories than he is in their losses. He has three fewer passing scores, and — interestingly — has rushed far more often in Chicago's defeats (10 rushes for 85 yards and 0 TDs versus 21 attempts for 160 yards and two scores in losses). Going against the Jets on Sunday, Trubisky needs to improve on his inconsistencies with accuracy and has to protect the ball. He has committed a turnover in all but one game.

4. Will the Eagles fix their third-down and red-zone issues? Those two areas were strengths last season. This year, not so much. The Eagles rank 17th in the red zone, converting touchdowns on only 55.2 percent of their trips inside the 20, and 16th in third-down conversion rate (39.2 percent). Compare those figures with last season’s Super Bowl run of 65.5 percent in the red zone (first) and 41.7 percent third-down rate (eighth).

Those deficiencies are two of the main reasons Philly is 3-4 and why the offense simply hasn’t put up the points like it did last season. The bad news for the Eagles? Even though the Jaguars have lost three in a row and their defense has been exploited at times this year, Jacksonville ranks second in defensive red-zone percentage (39.3 percent) and fourth in defensive third-down conversion rate (33.6 percent).

5. Will the Rams stay undefeated? They’ve looked like the best team in football through seven weeks and are the league’s lone undefeated team. But a sneaky fun matchup at home against Aaron Rodgers and the Green Bay Packers awaits. The Rams are heavily favored but have lost their last five against the Packers from 2007-15.

Granted, those teams featured Scott Linehan, Steve Spagnuolo and Jeff Fisher as the head coaches, so a lot has changed. But this is a Packers team (3-2-1) fresh off a bye and looking for both consistency and to keep pace with the Vikings in the NFC North. It should be a fun one and could be closer than many think.

6. Will the Redskins widen their lead in the NFC East?Surprise leaders of their division, the Redskins vaulted to first place with a tight victory last week against the Cowboys. With Dallas on bye and tied for second in the NFC East at 3-4 with the Eagles, Washington has a prime chance to build a little cushion. It faces the 1-6 Giants, losers of four in a row and a team that looks to be in the midst of a major rebuild with the trades of cornerback Eli Apple and nose tackle Damon Harrison. There still will be plenty of season left for Philly or Dallas to make a run, so Washington needs to take advantage of the short road trip to New Jersey.

7. The Ravens enter Sunday with the NFL’s top-ranked defense. Will they leave Week 8 in the same spot? Baltimore allows just 280.6 yards a game and 14.4 points a game. And while the Panthers offense isn’t necessarily a juggernaut (ranking 18th with 23.7 points a game), it presents some unique challenges with a strong-armed and mobile quarterback in Cam Newton, as well as speedy skill-position players like running back Christian McCaffrey.

In particular, the Ravens' pass rush is what makes their defense so lethal. Baltimore leads the NFL with 27 sacks — five more than the next closest team. But Carolina is tied for fifth with only 10 sacks allowed. That’s in part because of Newton’s ability to extend plays and scramble when the pocket breaks down. It should be a fascinating matchup to watch, strength on strength.

Week 14 NFL takeaways: What’s next for the Saints, Bills after crushing losses 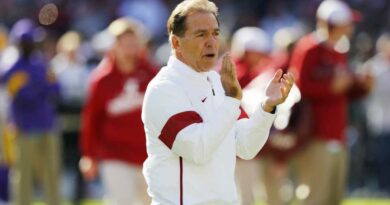 Nick Saban’s salary & net worth: Here’s how much money the Alabama coach made in 2020 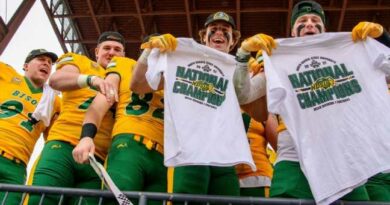