Home » NFL » Should Drew Brees retire from Saints? Why losing to Tom Brady, Buccaneers in NFC playoffs can inspire return 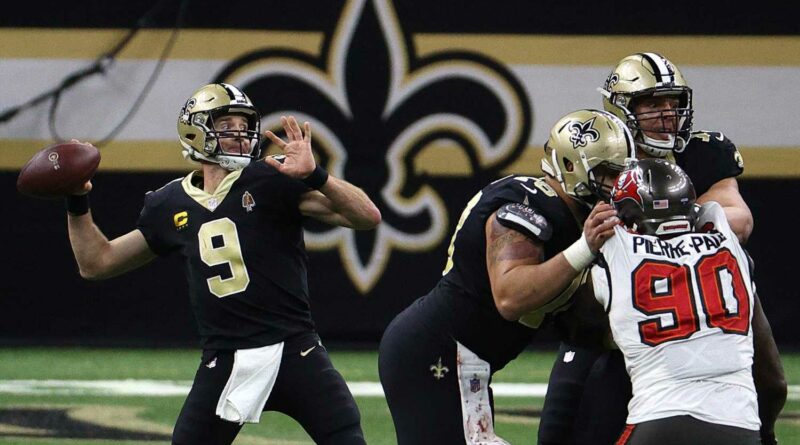 If Sunday’s 30-20 home NFC divisional playoff loss to rival Tom Brady and Buccaneers was Drew Brees’ last game as the Saints’ quarterback, then he would finish his Hall of Fame, Super Bowl-winning career with his worst playoff performance.

Brees (19-of-34 passing, 134 yards, one TD, three INTs, 3.9 yards per attempt, 74.9 passer rating) hit a single-game low in postseason efficiency, and all three of his turnovers were costly. The Saints’ best pass in the game was off a first-half trick play, when backup and long-shot successor Jameis Winston delivered a 56-yard touchdown.

It has been assumed that Brees, who turned 42 on Friday, would retire after the 2020 NFL regular season and 2021 NFL playoffs even if New Orleans fell short of getting to Super Bowl 55, which it did. But if anyone can inspire him to change his mind and return, then it would be Brady.

Brady’s team won, but it’s not as if Brady thoroughly outplayed Brees. Brady (18-of-33 passing, 199 yards, three total TDs, 5.9 yards per attempt, 92.2 passer rating) didn’t have much success connecting on downfield shots against the Saints’ defense and was fortunate that he also didn’t have a multiple-interception game, barely avoiding major disaster on a few of his throws.

When Brees’ Saints dominated Brady’s Buccaneers twice in the regular season en route to taking the NFC South, Brady was the one making the big mistakes, starting with an interception returned for a touchdown in Week 1 and ending with three more interceptions at home in Week 9. A little more than a year ago, when Brady was 42 and playing in New England, he experienced a very un-Brady-like nightmare in a bad home wild-card loss to the Titans, with his final Patriots playoff pass turning into a pick-six.

At the time, there were questions, tied to his arm strength and decision-making, whether age had caught up to Brady. Instead of retiring, Brady broke up with the Patriots, hit free agency and found the perfect new home in Tampa, as confirmed by him advancing to a 14th conference championship game.

Brady refused to let that performance in Foxborough be his swan song. He turned back Father Time (again) to come back playing like his 30-year-old self. Will Brees do the same after Sunday, not wanting to go out in that way?

For how much he has meant to the Saints and city of New Orleans, it has to be hard to think about “Who Dat nation” not being able to give him a full goodbye, with less than a full house in the Superdome. It also was the end of a trying season beyond the limitations of COVID-19 protocols, as Brees missed four games with battered ribs a year after he missed five games with a thumb injury.

The Saints got a good glimpse into their likely near future when they went 3-1 with Taysom Hill throwing and running in Brees’ latest absence. They also made a contingency plan by signing Winston, the Buccaneers’ starter before Brady, late in free agency. Suddenly, one pass might give him a chance to fight for the starting job.

Just like coach Sean Payton and the rest of the Saints’ organization have wrapped their heads around playing without Brees permanently, it has no doubt crossed his mind many times, too. No doubt, he imagined an ending much better than this.

Like all highly competitive aging athletes facing the crossroads of retirement and chasing one last championship, the mind is one part of the decision, but the real conflict comes down to body vs. heart.

Everyone might be thinking about how John Elway and Peyton Manning rode off into the sunset as Super Bowl winners for the Broncos. But that has been more the exception than the rule, seeing how it ended for Dan Marino and many other all-time great quarterbacks. With a fourth straight postseason of disappointment after being a division-winning NFC powerhouse, that expectation may no longer be reasonable for Brees.

Brady has blown everyone away with his age-defying play, and Brees has been right there with him. Aaron Rodgers — Brady’s NFC championship game counterpart and likely NFL MVP at age 37 — is headed down the same path of redefining the passing prime for an elite QB.

If Brees has any inkling that he can return healthier and play at a high level next season, then what Brady has done can serve as a strong suggestion to Brees that he should reconsider retirement, assuming he was leaning that way.

The difference between Brady’s situation last year and Brees’ this year is that Brees wouldn’t need to worry about a divorce from the Saints. If he wants to come back, then they would be totally behind him coming back and would stay committed to helping win big again.

There’s nothing “Big Easy” about Brees’ decision. Just maybe, seeing Brady and thinking that he, too, can rebound like that might ease him toward returning.