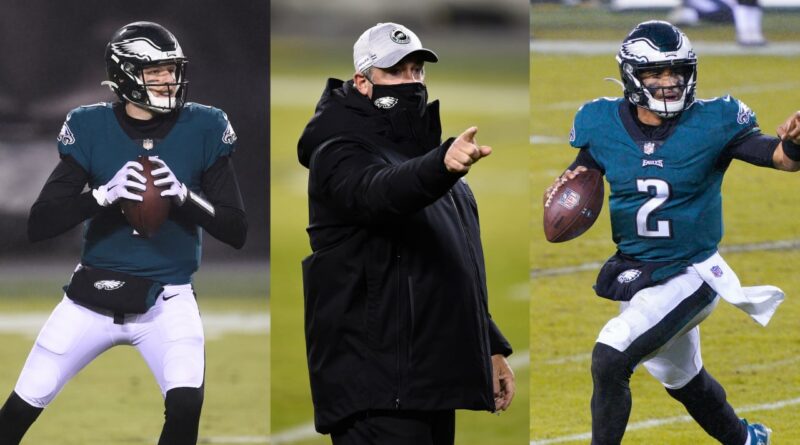 As the New York Giants waited and the world watched, the NFC East was decided when the Washington Football Team prevailed in confounding fashion, winning 20-14 against a Philadelphia Eagles squad that made a slew of dumbfounding decisions.

Down by three points with two minutes to play in the third quarter, Pederson elected to go for it on fourth-and-4 and Hurts threw an incompletion on what would be his last play of the game. Sudfeld was brought in, threw an interception and fumbled on each of the next two Eagles drives and Washington came away with a division-winning victory.

While scrutiny abounded, Pederson explained his decision and maintained he was endeavoring to win the ballgame.

“Yes, I was coaching to win,” Pederson told reporters. “Yes, that was my decision solely. Nate has obviously been here for four years. And I felt that he deserved an opportunity to get some snaps. Listen, if there’s anything out there that thinks that I was not trying to win the game. I mean, [Zach] Ertz is out there. Brandon Graham﻿’s out there. Darius Slay﻿’s out there. You know, all our top guys were still on the field in the end. We were [trying to] win the game.”

After the Giants defeated the Dallas Cowboys earlier Sunday, they needed an Eagles win to claim the NFC East. Obviously, that didn’t happen and Giants players were not shy in showing their displeasure with Pederson’s decision to bench Hurts for Sudfeld.

I think the eagles just hate us more than washington. That’s only thing that could make sense right?

Can someone make it make sense to me what’s going on….?

This is why we don’t like the Eagles. https://t.co/Efe7kEPtES

Through three quarters, Hurts was 7-for-20 passing for 72 yards, an interception and a 25.4 quarterback rating, but had the Eagles’ only touchdowns, scoring twice on the ground as he had eight carries for 34 yards. As bad as Hurts’ numbers were passing, Sudfeld’s were worse, as he was 5 for 12 for 32 yards with an interception and a 14.6 rating. He also lost a fumble.

Hurts, who said after the game he knew leading up to the contest that Pederson wanted to get Sudfeld some playing time, previously replaced Carson Wentz as the Eagles’ starter. Thus, with so many confused by Pederson’s decision as it relates to the final result, it’s also a bit perplexing going forward for a Philadelphia team with its quarterback situation in question, to say the least.

How NFL offensive linemen escape the 5,000-calorie lunch and transform in retirement