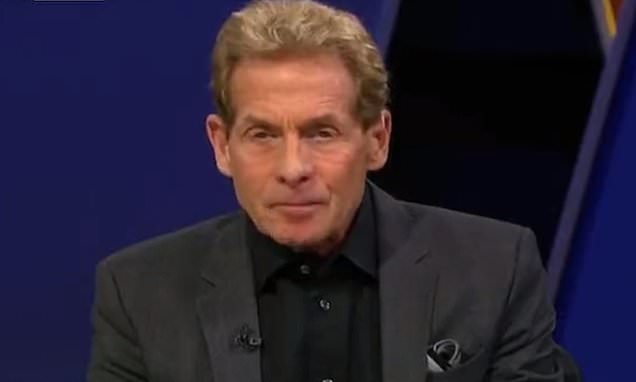 FOX Sports pundit Skip Bayless has issued a groveling apology for a tweet that he shared on Monday regarding the on-field collapse of Buffalo Bills player Damar Hamlin.

In the wake of huge controversy on Monday night, Bayless’ co-host and former NFL player Shannon Sharpe was noticeably absent from the latest episode of ‘Undisputed’, leaving him to apologize while sitting alone on the air.

‘Allow me to say upfront that I apologize for what we’re going to set out to do here today if it offends anyone because we’re going to try to do the show pretty much as we usually do the show,’ said the 71-year-old Bayless, who joined Fox Sports in 2016 after being an ESPN pundit for 12 years.

‘But, I’ll admit upfront that I’m still shook up by what happened last night to Damar Hamlin. In fact, I’m still wrecked. In fact, I’m not sure I’m capable of doing this show today.’ 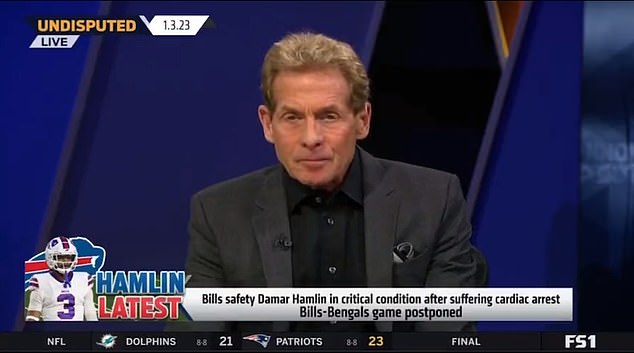 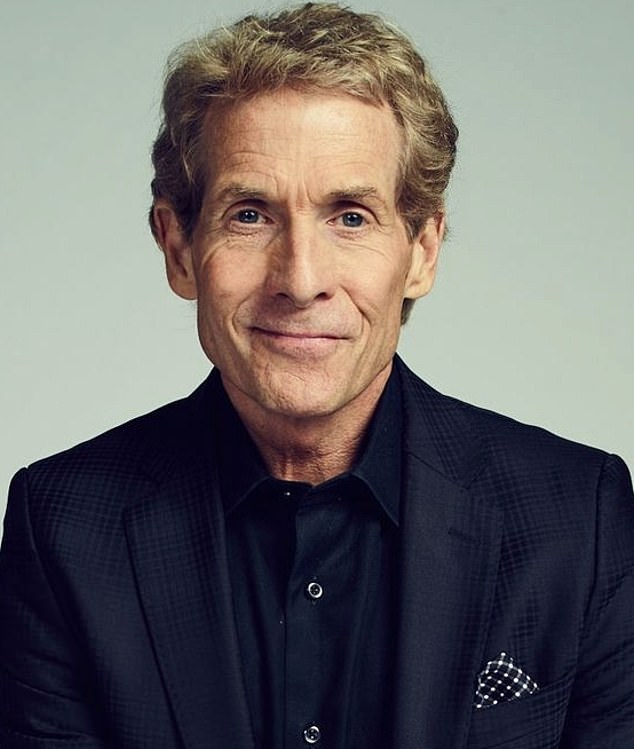 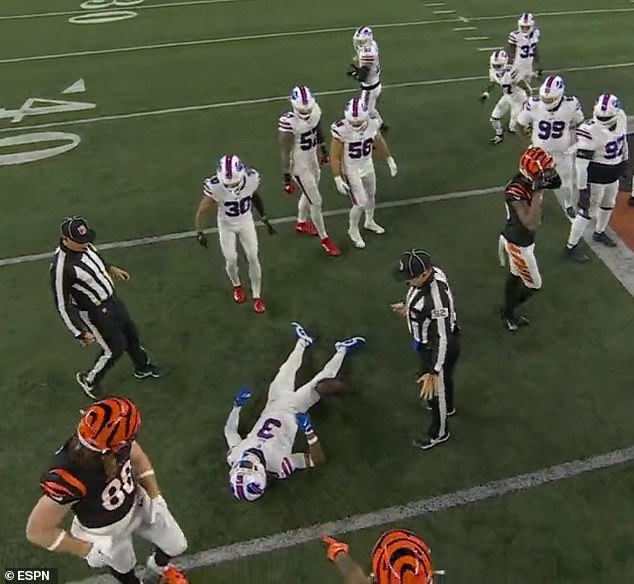 Hamlin, 24, remains in a critical condition today after he tackled rival Bengals receiver Tee Higgens. He collapsed after, going into cardiac arrest before being rushed to hospital

‘But after barely sleeping on it, I decided to give it a try,’ he added. Maybe I’ll fail. Maybe we will fail. But we’re going to try. We wrestled through much of the night whether to even do a show today because it felt like in our minds, we almost can’t win with this because the last thing we want to try to do is come off as insensitive to what this young man is going through in a life or death situation.

‘The last thing we want to do is offend anyone by trying to do what we always do, which is to talk about sports. As this show goes on, we’re going to try to talk about a little bit of sports.

‘But we’re going to continue to talk about what happened to this young man last night and try to sort back through it with help from the audience.’

With many fans of the show speculating that Sharpe was deliberately absent from Tuesday’s episode in an apparent response to Bayless’ tweet about Hamlin from Monday, the TV sports commentator only commented that he ‘looks forward to seeing him tomorrow.’ 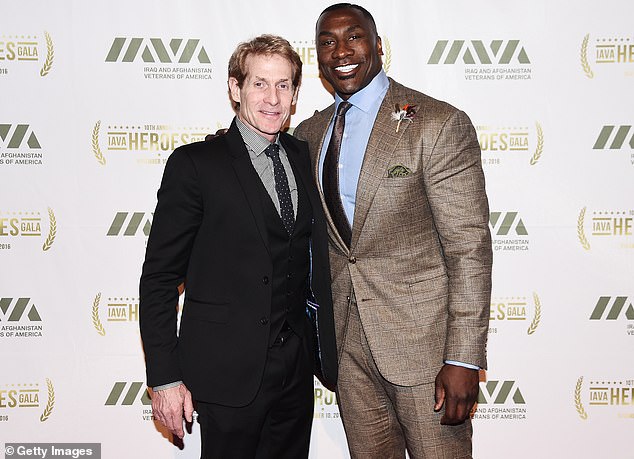 The co-host of Fox Sports’ ‘Undisputed’, Shannon Sharpe, was noticeably absent on Tuesday

On Monday night, Bayless sparked fury after he appeared to question if the NFL should postpone the Bills’ pivotal Monday night match against the Cincinnati Bengals after Hamlin suffered a cardiac arrest at Highmark Stadium.

As of Tuesday, Hamlin, 24, remains in a critical condition after he went in for a tackle on rival Bengals receiver Tee Higgens and collapsed before being rushed to hospital.

The match was subsequently suspended by NFL after Hamlin was taken off the pitch in an ambulance – but Bayless questioned how they could stop play during the final week of the regular season.

‘No doubt the NFL is considering postponing the rest of this game – but how? This late in the season, a game of this magnitude is crucial to the regular-season outcome… which suddenly seems so irrelevant,’ tweeted Bayless. 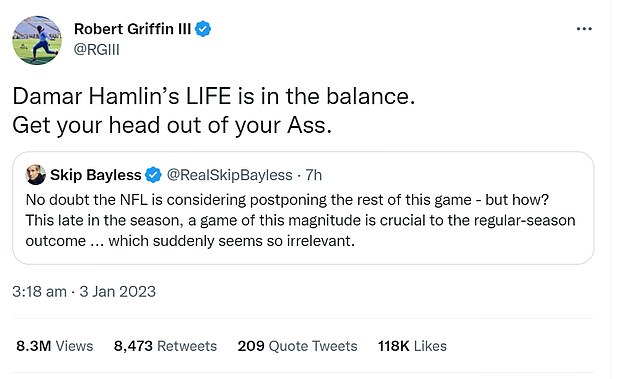 Bayless’ tweet on Monday shocked the sports world, with ESPN analyst Robert Griffin III leading the blacklash: ‘Damar Hamlin’s LIFE is in the balance. Get your head out of your Ass’ 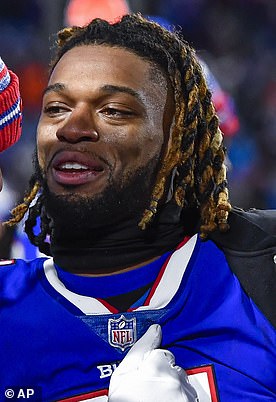 His tweet sparked fury amongst NFL fans, with ESPN analyst Robert Griffin III tweeting: ‘Damar Hamlin’s LIFE is in the balance. Get your head out of your Ass.’

NBA star Isaiah Thomas tweeted: ‘I hope they fire you bro!!! For you to even THINK of the game is very sad.’

One fan tweeted: ‘A platform as big as yours and you choose to concern yourself with a game over someone’s life? You are one of the worst out here. Shame on you.’

The backlash forced Bayless to apologize for questioning whether the match should be postponed.

Bayless tweeted on Tuesday: ‘Nothing is more important than that young man’s health. That was the point of my last tweet. I’m sorry if that was misunderstood but his health is all that matters. Again, everything else is irrelevant. I prayed for him and will continue to.’

During the match, the ESPN Monday Night Football broadcast cut to commercial on four occasions as Hamlin was receiving treatment on the pitch.

After the ambulance had left the field, reports initially suggested the game was going to restart following a five-minute warm-up, prompting an outpouring of anger on social media.

Vincent said the league took no steps toward restarting the game and did not ask players to begin a five-minute warmup period as ESPN’s broadcasters had announced.

‘It never crossed our mind to talk about warming up to resume play,’ Vincent said. ‘That’s ridiculous. That’s insensitive. That’s not a place we should ever be in.’

Hamlin remains in a critical condition after he collapsed on the field. In a chilling scene, the player was administered CPR on the field while surrounded by his tearful teammates.

‘Damar Hamlin suffered a cardiac arrest following a hit in our game versus the Bengals. His heartbeat was restored on the field and he was transferred to the UC Medical Center for further testing and treatment,’ the Bills said in a statement.

‘He is currently sedated and listed in critical condition.’ 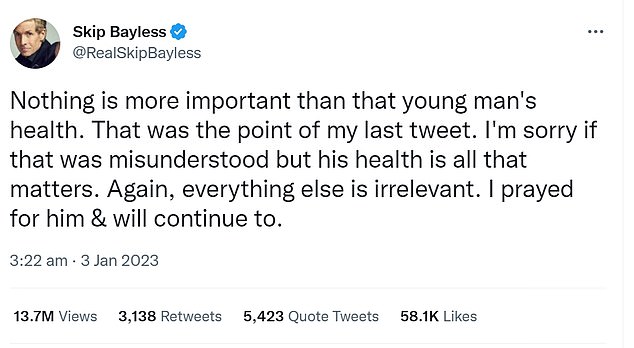 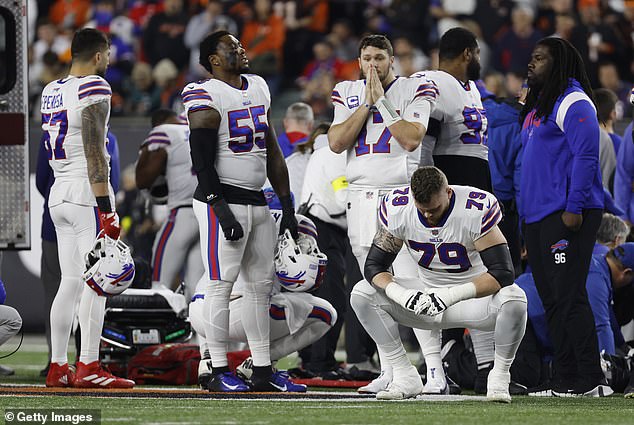 The NFL announced Hamlin’s condition shortly after he was taken to a hospital, but neither the league nor the hospital released any other details about the 24-year-old’s medical condition. The team’s statement was released before its flight arrived back in Buffalo early Tuesday. There was no immediate update about the future status of the game.

On the play the 6-foot, 200-pound Hamlin was injured, Higgins led with his right shoulder, which hit the defensive back in the chest. Hamlin then wrapped his arms around Higgins’ shoulders and helmet to drag him down.

Hamlin quickly got to his feet, appeared to adjust his face mask with his right hand, and then fell backward about three seconds later and lay motionless. 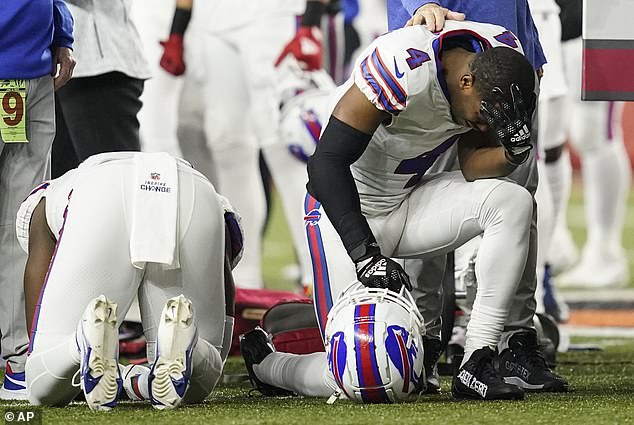 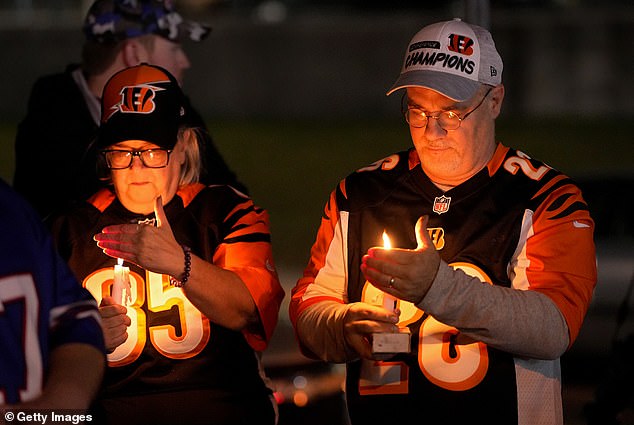 Hamlin was treated on the field by team and independent medical personnel and local paramedics, and he was taken by ambulance to University of Cincinnati Medical Center. Teammate Stefon Diggs later joined Hamlin at the hospital.

About 100 Bills fans and a few Bengals fans gathered on a corner one block from the emergency room entrance, some of them holding candles.

Jeff Miller, an NFL executive vice president, told reporters on a conference call early Tuesday that the league had made no plans at this time to play the game, adding that Hamlin’s health was the main focus.

An ambulance was on the field four minutes after Hamlin collapsed while many players embraced, including quarterbacks Buffalo’s Josh Allen and Cincinnati’s Joe Burrow. 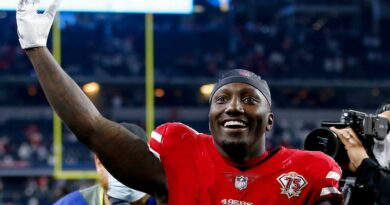