Putting NFL rumors to rest, Oklahoma coach Lincoln Riley has agreed to a contract extension with the Sooners.

A source told ESPN that Riley would receive a significant raise. Riley was the 16th-highest-paid coach in college football this year.

Riley led Oklahoma to the College Football Playoff in his first two seasons as head coach while tutoring Heisman Trophy winners Baker Mayfield and Kyler Murray, the first quarterbacks from the same school to win the award in consecutive years.

“We felt it important to extend and amend Lincoln’s contract at this time as we want him at the University of Oklahoma for a long time,” school president James Gallogly said Tuesday in a statement. “He is a great coach and role model for our student-athletes. His record of success speaks for itself.

“Lincoln is also the right representative for our university in such a high-profile position. I am proud to work with him and anxious to support him as he takes our program into the future.”

Riley’s success had drawn the interest of NFL teams. But he hinted after the Sooners lost 45-34 to Alabama in the playoff semifinal that he wasn’t ready to leave Oklahoma.

“He has proven to be one of the most innovative minds in the game today as well as a very successful leader for his student-athletes. His remarkable ascent as one of the most outstanding football coaches in America is grounded in creating the right environment for developing the best growth opportunities for all of his players. The incredible level of achievement and energy around our program all point to a very bright future under his leadership,” athletic director Joe Castiglione said in Tuesday’s statement.

Details of the contract extension will be finalized at an Oklahoma regents meeting later this month.

Tennessee fights off Kentucky in SEC semifinal, boosts case for a No. 1 seed 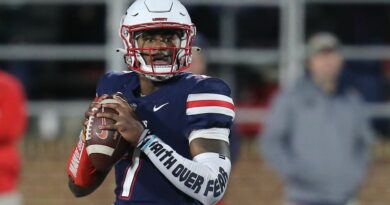 NFL draft buzz notebook: Where will the QBs go? Plus, favorite Day 3 sleepers and more