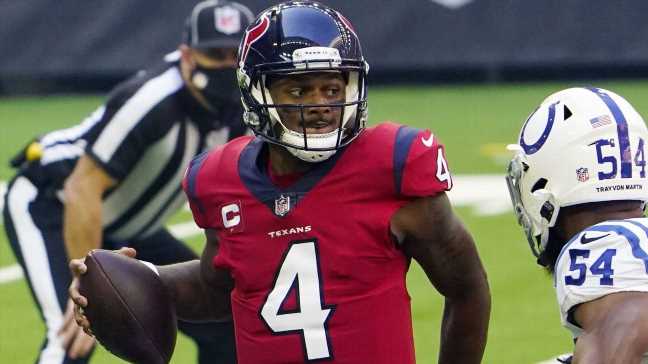 By hiring former New England Patriots executive Nick Caserio to solve a large set of problems within the organization, the Houston Texans have created additional ones with star quarterback Deshaun Watson.

Watson offered his input on potential general manager candidates, but the Texans neither considered nor consulted with those endorsed by their franchise quarterback, league sources told ESPN.

Additionally, the Texans did not inform Watson that they intended to hire Caserio, and he found out about the hire on social media. That contributed to Watson taking to Twitter that night to post “some things never change….”

Watson’s feelings were not directed toward Caserio, sources told ESPN, but instead were indicative of the way business was again conducted by the Texans.

Last offseason, Houston didn’t let Watson know that star wide receiver DeAndre Hopkins would be traded, which led to some disappointment. Now that it has happened again, Watson is said to be infinitely more bothered, sources told ESPN.

This time, Watson had met with Texans owner Cal McNair on several instances, sharing thoughts on certain candidates that came highly recommended, with Watson suggesting that the team at least talk to them, sources told ESPN. He did not expect Houston to hire those that he endorsed, but he was hoping the Texans would be respectful of the feelings of the group of his teammates that he was trying to represent, sources told ESPN.

The Texans, however did not act on their quarterback’s thoughts and charged ahead with a hire that mattered to a much smaller circle than the one that Watson was trying to aid, sources told ESPN.

Even if they didn’t want to move forward with any of Watson’s recommended candidates, sources told ESPN that Watson wanted to at least have the opportunity to meet with ownership’s finalists so he could offer his thoughts from a player standpoint to benefit the team — and then the Texans could hire who they wanted. That opportunity never came.

Now the focus turns to the fallout from the situation. The Texans clearly have an unhappy quarterback on their hands as they welcome Caserio to their franchise to try to help rebuild it.

There already has been speculation that Watson could demand a trade, though Caserio is only just starting his job and the team still doesn’t have a head coach. If the team were to trade Watson, it would have to absorb a salary-cap charge of $22 million, though it could get back a bounty of draft picks and players.

But the mess that Caserio was hired to clean up is actually larger due to the events that surrounded his hiring, as it now includes a disillusioned franchise quarterback.

Patrick Mahomes should become a household name this weekend, and it’s about time