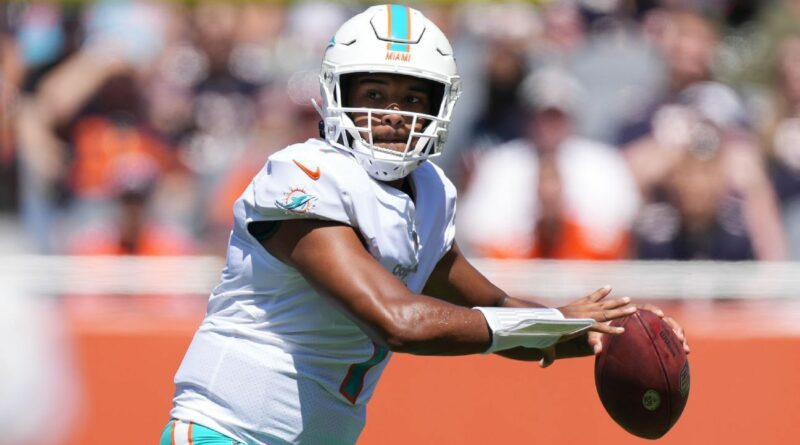 Miami Dolphins quarterback Tua Tagovailoa has a small fracture in the middle finger of his throwing hand and will not start Sunday against the Houston Texans, league sources told ESPN.

Jacoby Brissett is expected to be the Dolphins’ starting quarterback Sunday, according to a source, with Tagovailoa serving as Miami’s backup.

Tagovailoa was limited with his throws all week and has made progress, but his finger has not healed enough to the point where he can start against Houston.

Tagovailoa likely will only play in an emergency situation Sunday, according to sources, but is expected to dress as the backup because the Dolphins are short-handed at the position, after quarterback Reid Sinnett recently was claimed off waivers by the Philadelphia Eagles.

Tagovailoa said he doesn’t know exactly when he suffered the injury in last week’s loss to the Buffalo Bills, but he suspects it was in the second quarter. He finished the game last week without missing a snap, but was limited in practice each day this week.

The injury is not expected to keep Tagovailoa out long-term, according to sources. But Miami has a quick turnaround in Week 10 with a game Thursday night, and Tagovailoa’s status for that game against the Baltimore Ravens also is in question.

Oklahoma WR Marquise Brown to miss combine due to Lisfranc injury, per report