Where does your franchise stand heading into 2022? Adam Rank sets the table by providing a State of the Franchise look at all 32 teams, zeroing in on the key figures to watch and setting the stakes for the season to come.

Members of the Rams organization, Rams fans around the world and those who really want to (forget) those picks:

Your Los Angeles Rams are the world champions of football, having won the first Lombardi Trophy in the franchise’s L.A. history and the first professional football title for the city since Tommy Maddox led the Los Angeles Xtreme to the top of the XFL. (Not to brag, but I was at the Million Dollar Game.) Now, they’ll try to repeat — and they’ve got a great chance.

One high from last season: Winning the Super Bowl. Obviously. What could be better? But let me point this out, too: Beating the 49ers in the NFC Championship Game might have been even sweeter. The Rams lost six consecutive games to San Francisco going into that one. People were looking at Sean McVay like he was Kyle Shanahan’s little brother. The Rams even tried to limit ticket sales outside of Southern California to stop a hostile takeover of SoFi Stadium by Niners fans. Winning that NFC title match was huge. Almost bigger than the Super Bowl. Almost.

One low from last season: Losing Robert Woods to a torn ACL in November. It’s apparent how much the Rams loved Woods. He was on the podium when the team accepted the Lombardi Trophy. Cooper Kupp spoke glowingly of him. He was a huge part of that championship run, ranking second on the Rams in targets, catches, receiving yards and receiving TDs through the first nine weeks of the season. Football is a cold business, reflected by the fact that Woods has since been traded to the Tennessee Titans. But it was heartbreaking when he went down last year.

Head coach: Sean McVay. This guy’s been one of the hottest names in the NFL since taking over as a 30-year-old in 2017. He’s never lost more than seven games in a season, and he led L.A. to the Super Bowl in Year 2; meanwhile, it seems like anybody who’s ever spent time with him has gotten an NFL gig in the past few years. But going into 2021, there wasn’t yet a great answer to anyone who asked what McVay had really ever won.

Well, now you can say Super Bowl LVI. And before accomplishing that, he dispatched his biggest rival in the NFC Championship Game, as I described above. McVay’s star has never been brighter. The next challenge will be winning more titles — we’ve seen a lot of coaches break through to capture that first Lombardi, then fail to ever get back there again. (Looking at you, Sean Payton.)

Quarterback: Matthew Stafford. The narrative around Stafford has forever changed. I mean, when the Rams shipped picks and Jared Goff to Detroit for the longtime Lions QB last year, there were people who questioned if it was even a good idea. Not me; I liked the move. But it clearly turned the question of “What could Stafford become on a talented team?” from a hypothetical what-if into something Stafford was going to have to answer. And, well, that’s exactly what he did. He’s a Super Bowl winner. (In fact, he has as many NFC titles and Super Bowl wins as another quarterback against whom he regularly competed in the NFC North. I’m just saying.)

Those of you who thought of Stafford as “Pat Stat-Ford,” a fantasy producer who generated yards on a losing team, should find somebody else to pick on. And with a brand new extension, the 34-year-old has a real chance to cement his legacy and add some more hardware.

Projected 2022 MVP: Aaron Donald, defensive tackle. The quarterback is typically the easy choice for this slot, but I don’t think there is a non-quarterback out there who is more important to his team than Donald is to the Rams. Think of the Super Bowl and how, prompted by some chirping from the Bengals, Donald seemed to come alive like one of those players who would literally burn in NBA Jam back in the day.

Donald has teased the possibility that he might retire, but we’ve also heard that he and the team are working on an extension heading into Year 9 of his NFL career. If, as I’m assuming at this point, Donald returns, locking up the seven-time All-Pro (and three-time Defensive Player of the Year) will be the most important move for the team this offseason, even topping the Stafford extension and additions of Allen Robinson and Bobby Wagner. (And, not to brag, but I had Donald here last year.)

New face to know: Allen Robinson, receiver. I’m a Bears fan, and I would have liked to keep Robinson in Chicago, where he spent the past four seasons, but I loved this signing for the Rams. It’s like breaking up with somebody who just wasn’t that into you anymore; it’s tough, but I’m going to take the mature approach and just be happy for him, because I can’t think of a better landing spot. Robinson is coming off his worst statistical season, but I still contend he is a top-10 receiver (at least) in the right situation — and this is absolutely the right situation. Robinson, Kupp and Van Jefferson comprise one of the best receiver trios in the league. I’m not afraid to say it.

2022 breakout star: Tutu Atwell, receiver. I’m a big fan of the Rams’ second-round selection last year. Atwell didn’t log a single target on offense as a rookie, though he looked good on special teams before ultimately being waylaid by a shoulder injury. The dude has got some skills. And with Kupp and Robinson commanding a lot of attention, he has the game-breaking ability to make some huge touchdown receptions. I know a lot of you are going to be tempted to take him in your fantasy drafts. I’m not sure he’s going to have the target share to produce in that realm, but Atwell is going to appear on some highlight reels.

Will the Rams be able to …

Be the first repeat champions since the Patriots in the early 2000s? This is easier said than done. The Buccaneers, winners of Super Bowl LV, had 22 returning starters — which I’m surprised people didn’t find a way to somehow mention more — last year, including Tom Brady, the last quarterback to lead a team to back-to-back Super Bowl wins. And even that wasn’t enough for a group that, let’s be honest, was right there, despite dealing with injuries. So this is a legitimate question.

I will cite the excellent point that Willie McGinest made with me on NFL Total Access recently: The Rams do have a relatively fresh Super Bowl loss on their ledger (in Super Bowl LIII), which should help them fight complacency. And Stafford can surely still remember his dour Detroit days. So the Rams figure to have a strong shot here.

Weather the loss of Andrew Whitworth? Now, you could make the case that Joe Noteboom can certainly fill the void left by the retired Whitworth at left tackle. But I’m talking about more than the depth chart. Whitworth was the 2021 Walter Payton Man of the Year. And his presence off the field might be the toughest for the Rams to replace.

… people shouldn’t overlook: The Rams’ release of longtime punter Johnny Hekker. I mean, this guy had come to seem like a Los Angeles institution, as reliable as a double-double from In-N-Out, having been with the team since it moved to L.A. in 2016, and for four seasons before that. But the Rams just let him go. Now, the 32-year-old did have the worst season of his NFL career in 2021. And nobody on a team that moves on without sentimentality from players like Woods and Goff is truly safe. I’m just saying I don’t know many fan bases — outside of the Colts’ fans during Pat McAfee’s years in Indy — that include scores of people wearing jerseys of the punter. It will be wild to see Hekker, who signed in Carolina, with another team.

… people shouldn’t overthink: The question of who will be the starting running back. I must admit that most people asking about this play fantasy football. The bottom line is, the Rams have a great running scheme, and it doesn’t really matter who logs the most carries. Sony Michel is gone, having signed in Miami, but Darrell Henderson and Cam Akers are back, joined by fifth-round pick Kyren Williams. Henderson helped Michel pick up the slack while Akers recovered from a torn Achilles last season, then Akers returned to lead the Rams in carries throughout the playoffs. And they won it all with Akers topping the team in the Super Bowl with 13 carries … for 21 yards. I guess what people want to know is if they should draft Akers in fantasy this year. And I’d say yes, as long as the price is right. 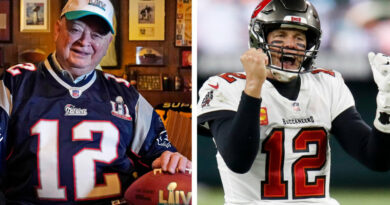