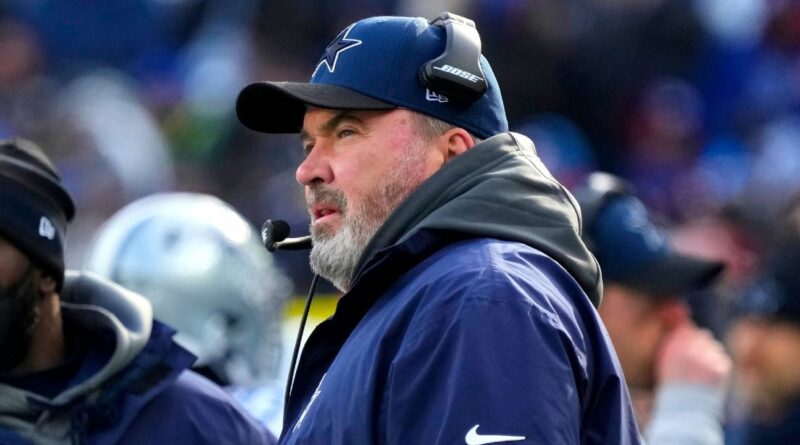 Asked by 105.3 The Fan in Dallas a day after the Cowboys’ season ended with a wild-card loss to the San Francisco 49ers whether he was confident McCarthy would continue to lead the team in 2022, Jones said, “Absolutely. Very confident.”

After the loss, owner and general manager Jerry Jones was not willing to speak about McCarthy’s role going forward but acknowledged disappointment in how the team played in the 23-17 loss, particularly at the start.

“I’m not going to discuss coaching, the preparation, any of those things,” Jerry Jones said. “That’s not on the table. The game speaks for itself. Really I thought the score was not indicative of the game, but the way our team fought back and got back in the game gave us a chance to give a shot. I was really proud but this is one of the best groups of players that I’ve been around.”

In the past Jerry Jones said one of his bigger regrets was firing Chan Gailey after two seasons in the late 1990s. Gailey went 18-14 and made the playoffs in 1998-99 with a roster that was in decline after a Super Bowl run. The Cowboys went 5-11 in three straight seasons after Gailey’s dismissal.

McCarthy has an 18-15 regular-season record in two seasons, including a 12-5 mark in 2021 that was good enough to win the NFC East.

After the loss to the 49ers, McCarthy had a brief conversation with the Joneses.

“I don’t have any concerns,” McCarthy said of his future. “I’m proud to be standing here today. I’m proud of my football team.”

Also on The Fan, Stephen Jones expressed regret over fans throwing debris on the field when the officials ruled the game was over after quarterback Dak Prescott was unable to get the final snap off before the clock ran out.

“That is just unfortunate,” Stephen Jones said. “That is not the way I see our fans. I think we’re a class act. I think there is no place for things like that. Understand people being frustrated, but I don’t understand throwing things onto the field where people could get injured. There’s just no place for that.”

Why did the Cowboys release Dez Bryant? Contract, injuries led to abrupt end to Dallas career

Printable Super Bowl squares grid for 49ers vs. Chiefs in 2020