Home » NFL » Stephen Jones: Dak Prescott having ‘best camp that I’ve seen him have since he’s been a Cowboy’

Last training camp, Dak Prescott dealt with a muscle strain in his throwing arm as he recovered from a fractured foot. This year, the quarterback is healthy and impressing during offseason work.

“I thought he’s had his best camp that I’ve seen him have since he’s been a Cowboy,” Cowboys executive vice president Stephen Jones said recently, via Calvin Watkins of the Dallas Morning News. “Velocity, his accuracy, the whole thing. Obviously, as the quarterbacks get older, they get better. The good ones do. They get better every year. There’s no question in my mind, I think he’s had his best training camp he’s ever had.”

Prescott’s health is finally not in the spotlight during Cowboys camp. What is under the microscope is Dallas’ receiver corps, which was a question mark even before CeeDee Lamb and Noah Brown missed practices this week. Michael Gallup isn’t expected to be ready for Week 1 as he continues to rehab his torn ACL, and free agent James Washington suffered a foot injury that will knock him out 6-10 weeks.

The questions at receiver put more pressure on Prescott to be perfect.

“I don’t necessarily get frustrated,” Prescott said of playing with a decimated WR corps. “That’s what this is about, this is exactly about that time to work and make other guys step up and take advantage of their opportunities.”

If the Cowboys are to repeat as NFC East winners, they’ll need Prescott to be at his best for 17 games, rising all boats along the way. The 29-year-old understands it’s on his shoulders.

“I do what I’m asked to do being the quarterback of this team,” Prescott said. “Anytime you’re playing this position, you know your responsibilities to get other guys to come with you, to get guys to be locked in, be disciplined. No different whether the receiver corps is old or young, they look to me for answers and I look to them to communicate and be on the same page, and we’ll continue to do that and continue to grow.”

NFL+ gives you the freedom to watch LIVE out-of-market preseason games, LIVE local and prime-time regular-season and postseason games on your phone or tablet, the best NFL programming on-demand and more! Wherever you are, this is how you football!Learn more _about NFL+.
_ 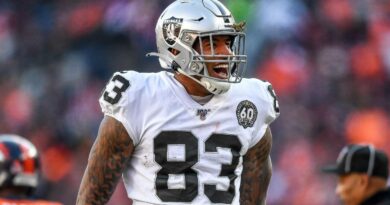