The Titans and Rams will meet on Sunday Night Football in a rematch of Super Bowl XXXIV. The then-St. Louis Rams prevailed by inches in that contest, but Vegas sportsbooks aren’t expecting such a thrilling matchup this time around. Sans star running back Derrick Henry (foot), the Titans are getting more than a touchdown as road underdogs. The total opened as high as 54, so plenty of scoring could be on tap, which means we have plenty of viable DFS options for our Week 9 DraftKings Showdown lineup.

Before we get into our picks, here are the key DraftKings Showdown rules: It’s full-point PPR, and there are three-point bonuses for 300 passing yards, 100 rushing yards, and 100 receiving yards. The Captain picks costs 1.5 times a player’s original price, but he also gets his point total multiplied by 1.5.

Brown is in the midst of a torrid stretch, scoring 30-plus DraftKings points in each of his past two contests. With Henry out for an extended period of time, the Titans will need to put more on Brown’s broad shoulders. It’s likely Brown is going to spend a lot of time in Jalen Ramsey’s coverage, but that’s not enough of a reason to scare us off of him.

Kupp has simply been electrifying this season, surpassing 30 DK points in as many games (four) as he has finished under that mark. He owns 36.4 percent of the Rams’ target share, and with Robert Woods dealing with a foot injury, Kupp could see an even meatier portion of the pie. A fourth consecutive 100-yard effort is in the cards.

Henderson has averaged 20 opportunities over the past three weeks and is a solid bet to maintain a healthy workload. He’s averaging 5.1 yards across his 126 touches and is likely headed toward another full complement of work. Opponents have gained 4.5 yards per carry against the Titans, who have also been among the worst run defenses per DVOA. The stage is set for Henderson to deliver a successful performance.

McNichols will serve as the face of the “next man up” mantra as the Titans adjust to life without Henry. Of McNichols’ 28 touches this year, 21 have been receptions, so he’s even more appealing inDraftKings’ full PPR scoring format. Nobody is going to single handedly fill the 29.6 touches-per-game void Henry leaves behind, but the anticipation is that Tennessee will deploy McNichols’ skillset in an appropriate manner.

Titans offensive coordinator Todd Downing has suggested that they won’t get away from their run-based identity throughout Henry’s absence. Perhaps that’s the case this week, and if so, the ageless Peterson will handle between-the-tackles duty and serve as a threat to find the paint. DFS players should maintain reasonable expectations, but even a modest-to-solid effort will do the trick at his salary.

Filling the shoes of a star as prodigious as Henry is a multi-player endeavor — one that could include Pruitt. His 11 targets are third among tight ends behind Anthony Firkser and Geoff Swaim, but he’s been the most dynamic of the trio with a 12.7-yard/catch average, 90.9-percent catch rate, and two touchdowns. 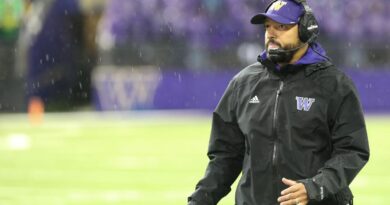