The oddsmakers predicted a rough game for NC State last Saturday, and boy were they right. They suffered a grim 41-7 defeat to Clemson. NC State’s defeat came about despite a quality game from Reggie Gallaspy II, who rushed for 59 yards and 1 touchdown.

As for Syracuse, they had a rough outing against Pittsburgh three weeks ago, but a little bit of home cooking seems to have fixed things right up. Syracuse had just enough and edged out North Carolina 40-37. The overall outcome was to be expected, but North Carolina made it more of a match than the oddsmakers had predicted.

NC State was able to grind out a solid win over Syracuse the last time the two teams met, winning 33-25. The rematch might be a little tougher for NC State since the team won’t have home-field advantage. We’ll see if the change in venue makes a difference.

The Wolfpack are a slight 2.5 point favorite against the Orange.

NC State has won all of the games they’ve played against Syracuse in the last 4 years. 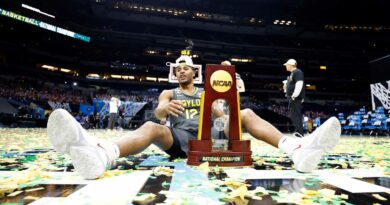 ‘Make a movie out of it’: Go behind the scenes of Baylor’s first national championship celebration

The SEC remains king, and more takeaways from the NFL draft