Trolling has become a mainstay in college football, and the TCU Horned Frogs executed a perfect joke at the No. 18 Oklahoma Sooners’ expense.

TCU jumped all over Oklahoma, outscoring the Sooners 27-10 in the first quarter. The Horned Frogs continued to pile up the points and held a 41-17 lead at halftime. Oklahoma’s starting quarterback Dillon Gabriel exited the game in the second quarter after being hit while sliding, which put the Sooners at a bigger disadvantage. Linebacker Jamoi Hodge, who hit Gabriel, was penalized for targeting and ejected.

The Horned Frogs were playing at the same time that New York Yankees outfielder Aaron Judge was attempting to break Roger Maris’ American League home run record against the Baltimore Orioles. It has been the talk of not only baseball but the entire sports world over the past couple of weeks.

Well, after running back Kendre Miller scored on a 69-yard run in the third quarter to make it a 48-17 ball game, TCU’s Twitter account burned OU with a timely troll.

Neither the Horned Frogs or Judge reached 62 on Saturday. TCU finished with 55 points and Judge finished 0-2 with two walks. Oklahoma’s 55 points allowed on Saturday are the second most it has allowed in a game against an unranked opponent in program history. The Sooners allowed 59 points to the Texas Tech Red Raiders in 2016, a game that OU won 66-59.

NFL picks, predictions against the spread for Week 8 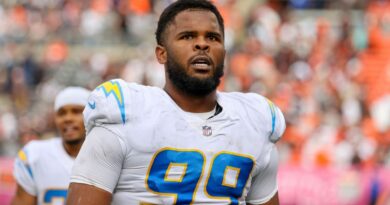