New Texans head coach Lovie Smith spoke glowingly of Mills’ play down the stretch of the 2021 season and the leadership the second-year quarterback displayed early in the offseason, gathering teammates for workouts.

“If you look at all of my comments about Davis, I am a believer in him and what he’s going to do,” Smith said Monday. “Eventually, he’s got to do it all on the football field consistently where everybody loves him, every snap and all of that. Before a guy has played enough to do all of that, he shows up every day. Availability, he is available, and he has recruited other players to come here, and what the guys see him doing is just working. When I say I believe in him, (offensive coordinator) Pep Hamilton, second year in the system, all of these things. … If you just go back and look at the plays that he made, throwing the ball downfield last year, so many good things that he did, and that’s as a rookie.”

“The improvement that you see from year one to year two is normally a big improvement, and that’s what we’re gonna get from him.”

Mills had a rocky start to his rookie campaign, getting forced into duty in Week 2 after Taylor went out injured. In his first six starts, Mills completed 69 percent of his passes for 209 yards per game with six TDs, seven INTs and an 82.3 passer rating while taking 19 sacks (3.2 per game). The Texans lost all six starts.

After being sent back to the bench in favor of Taylor for three games in the middle of the wayward season, Mills returned to the starting lineup for the final five weeks. He showed drastic improvement. In those final five starts, he completed 68.4 percent of his passes for 251.6 yards per game, nine TDs, two INTs and a 102.4 passer rating while taking nine sacks.

Mills’ improvement was dramatic, as the Texans won two of those final tilts and were at least competitive early in the others.

That play down the stretch led Houston to give the former third-round pick the reins to open the season. With Jeff Driskel and Kyle Allen the other veterans on the roster, it’s clearly Mills’ show to start the season.

“I think the simple fact that we’re talking about Davis as potentially being our starting quarterback,” the OC said, “it’s going to be really important he brings a certain level of consistency every day.”

It’s possible in theory that Houston could still draft a quarterback later this month, but given the questions about the top prospects, it’s a smarter use of assets for the rebuilding Texans to see what Mills can bring to the table in 2022 before deciding whether he can be the long-term answer. If Houston winds up with another high pick in 2023, it could look to fill the spot in what is expected to be a stronger draft at the position. 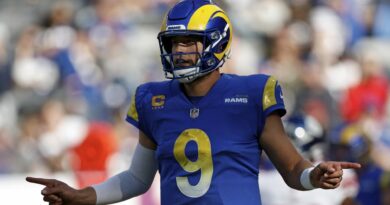