Crennel made the leap to the NFL in 1981 as a special teams coach with the New York Giants after more than a decade at the collegiate level. He went on to work 39 seasons in pro football with the Giants, New England Patriots, New York Jets, Cleveland Browns, Kansas City Chiefs and the Houston Texans.

Crennel was part of five Super Bowl championships — two as an assistant with the Giants and three with the Pats.

“Football has been my entire life and it’s been a dream come true to coach for 50 years,” Crennel said in a statement. “There are so many friends to thank who have helped me and supported me throughout my career. I especially want to thank the fans and owners of the New York Giants, New England Patriots, New York Jets, Cleveland Browns, Kansas City Chiefs and Houston Texans for allowing me to contribute to the game that I have loved so much for so long. I’ll miss everything about coaching and teaching, but the thing I’ll miss the most is being around the guys every day. My goal was to put every player and coach in the best position to succeed and I consider every guy I coached or worked with a part of my family. I would also want to thank my wife Rosemary and my three daughters, Lisa, Tiffany and Kristine, for all of their support over the years. Because of their love and selflessness, I have been able to live out my dream. I’m thrilled to have the opportunity to spend more time with my grandchildren while staying around the game of football.”

The 74-year-old Crennel last coached for the Texans in 2020, taking over the interim head coaching role after the dismissal of Bill O’Brien. He spent 2021 as a senior advisor for football performance with Houston.

The defensive mind got his first head coaching gig in Cleveland in 2005, where he spent four seasons. Crennel garnered a 24-40 record with the Browns, including a 10-win season in 2007.

After joining K.C. in 2010 as a defensive coordinator, Crennel took over the interim head coaching duties in Kansas City in 2011, which led to him getting the full-time role in 2012. He was fired after a 4-15 record.

Crennel spent the final 12 games in 2020 as the Texans’ interim head coach, going 4-8. Seventy-three years old at the time, Crennel became the oldest person in NFL history to serve as a head coach in a game — a record previously held by former Chicago Bears head coach/owner George Halas.

Why the Washington Redskins’ new name, logo announcement could take a while 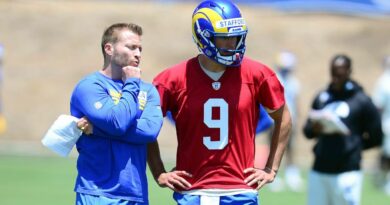