The lawsuit filed on Monday in Harris County, Texas, accuses the team of being aware of Watson’s alleged behavior during massage therapy sessions, and that “individuals within the Texans organization knew or should have known of Watson’s conduct.”

The lawsuit also states that the Texans provided Watson with resources to conduct his therapy sessions, including “rooms set up for him at the Houstonian Hotel, massage tables provided to him for private massage sessions, and a NDA provided to him from the head of Texans’ security.”

“We are aware of the lawsuit filed against us today,” the Texans said in a statement on Monday. “Since March 2021, we have fully supported and complied with law enforcement and the various investigations. We will continue to take the necessary steps to address the allegations against our organization.”

Watson is facing potential discipline from the NFL, which is independently investigating whether he violated the league’s personal-conduct policy after Watson was accused of sexual assault and misconduct during massage sessions.

It was announced last Tuesday that Watson had reached confidential settlements with 20 of the 24 women who have filed civil lawsuits alleging he committed sexual misconduct.

Watson has previously denied any wrongdoing and maintained any sex with the women was consensual. Two grand juries in Texas have declined to indict Watson on criminal complaints filed by 10 women.

The Texans traded Watson to the Cleveland Browns in March and signed him to a five-year, $230 million fully guaranteed contract. 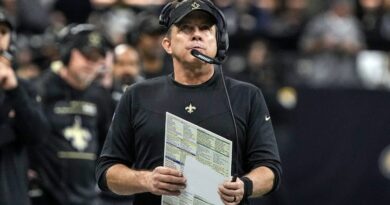 Saints owner Gayle Benson on Sean Payton's future: 'I don’t think any of us know'