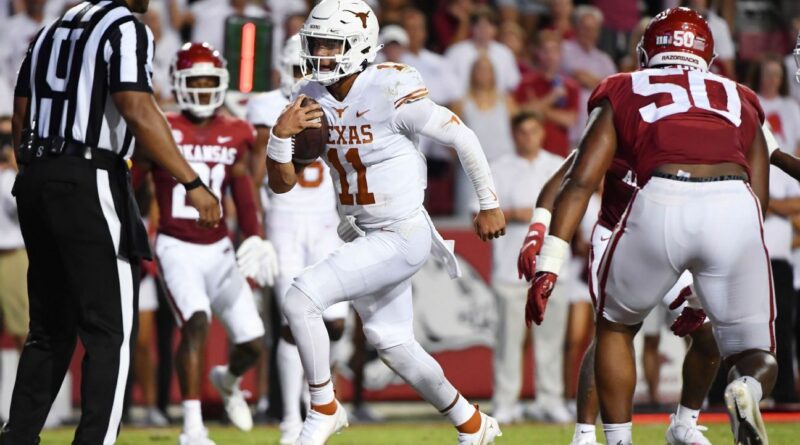 Card, who started the first two games, was 8-of-15 for 61 yards and was sacked three times in the Longhorns’ 40-21 loss to Arkansas. Thompson, who also played in the second half against Louisiana, came in and was 5-of-8 for 57 yards and also rushed seven times for 44 yards and two touchdowns.

“I thought Hudson was all antsy in the pocket,” Sarkisian said, saying Card moved around too much. “We weren’t great protecting him early on in the game, but I thought he was a little antsy and we missed some opportunities. The game could have easily gone a different direction than it did.”

Sarkisian said both quarterbacks would continue to play, but said he thought it was “fair” to Thompson to let him get the start against Rice (0-2) in Austin on Saturday.

“I think it would be good for Hudson to take a little bit of a deep breath coming off of last week’s game, and be great opportunity for Casey to step in,” Sarkisian said.

The Longhorns (1-1) struggled up front against Arkansas.

Running back Bijan Robinson was held to 69 rushing yards, ending a streak of three straight 100-yard games. According to ESPN Stats & Information research, Robinson was hit at or behind the line of scrimmage on 10 of his 21 rushes, gaining just 2 yards on those 10 carries. Overall, the Longhorns were hit at or behind the line on 42% of their rushing attempts. Texas had 11 rushes go for zero or negative yards.

Sarkisian said the loss was frustrating, but it won’t lead to wholesale changes.

“We’re a new coaching staff. We’re a new scheme,” Sarkisian said. “You know that the natural knee-jerk reaction is the sky is falling, we’ve got to change everything. We’ve got a system, we’ve got coaches that have withstood the test of time and will rely on that, and the players will continue to buy into that. And in the end, we will reap the benefits of that, so we’re going to stay the course, but we definitely have to fix the errors that occurred.”

Vic Fangio: Broncos have a Passing Game Problem, not a Drew Lock Problem – The Denver Post