Remember that huge Big 12 game between No. 6 Texas and No. 13 West Virginia in Week 10? It’ll have just a little bit less national hype with other big games going on around it. The Longhorns went to Oklahoma State on Saturday hoping to get a seventh consecutive win, but instead fell short 38-35.

It was a bad start for the Horns — about as bad as possible. After exchanging touchdowns on each team’s opening drive, Texas trailed 31-14 at halftime. Though Texas isn’t built to come from behind in such deficits, it was at least able to make a run. In the end, though, the effort fell short and now Texas enters November with a conference loss like every other Big 12 team.

Texas is still a work-in-progress. The Oklahoma game was the Longhorns’ Super Bowl and they played like it. It was the best Texas has looked under Tom Herman and a vision of what this team could be. But the big-picture version of this team is that it’s still a work-in-progress. Texas finally overcame its inability to score in the fourth quarter, but only because it had to in order to pull close to Oklahoma State. And when Texas could score, it could do so quickly. Though all five scoring drives were long — 59 yards or more — they were quick, all under four minutes in length. But then there were long stretches in which Texas couldn’t do anything offensively. Credit to Oklahoma State for playing well, but that kind of streakiness is what gets Texas in trouble.

And the defense got pushed around again. The first half was reminiscent of the Week 1 loss to Maryland given how poorly Texas was playing on that side of the ball. The Longhorns finally got better penetration as the game went on, but when Oklahoma State needed big plays, they got them, as evidenced by its 50 percent third down conversion rate (and going 2-of-2 on fourth down).

Tylan Wallace is a game-changer. The sophomore has been putting up excellent numbers all season, but he might have been the best-kept secret in the Big 12. Wallace had a career night with 222 yards receiving on 10 catches and two touchdowns. Of all the things Texas did not have an answer for — and they were numerous — he was the hardest to defend. He won 50-50 balls, made tough catches in traffic and got plenty of yards after the catch. If there was a way he could hurt Texas, he did.

And therein lies the extra salt in the wound for the Longhorns, who, according to 247Sports, did not offer Wallace a scholarship. It’s still kind of vogue to pick on Texas for such recruiting misses, but for context, neither did fellow Big 12 member TCU. Recruiting is a hit-and-miss game sometimes. You’re not going to land everyone and you’re not going to unearth everyone. Spots fill up and every class has needs. Still, as the flagship program in one of the most talent-rich states in the country, these types of performances burn just a little bit more.

Mike Gundy still has it. As if he didn’t, right? Gundy has taken a lot of criticism this season for sticking with quarterback Taylor Cornelius. It didn’t exactly quell the frustration when Gundy seemed calm about the status of his team despite losing three of the last four games. But if there’s one thing to know about Gundy it’s that he usually has a couple of tricks up his sleeve. He has the utmost confidence in himself, and while sometimes that come across as stubbornness, it also means he’ll give you a game like this one.

Practically everything worked perfectly for the Pokes offensively. Cornelius had 324 yards passing and three touchdowns. The over-the-middle routes were there. The out routes were there. The deep routes were there. The motion and misdirection caught Texas off-guard all evening. Oklahoma State ran the ball much better, too. Justice Hill and Chuba Hubbard combined for 172 yards and Cornelius was effective on zone-read keepers. Gundy put in a bunch of new, little wrinkles in the off week and it paid off. It helped that the offensive line did a much better job blocking Texas at the first and second levels, too.

The Big 12 Championship Game race is wide open. Heading into Week 9, the Big 12 title game race appeared to have three main competitors: Oklahoma, Texas and West Virginia. Well, Texas now has a conference loss, meaning no Big 12 team is undefeated in league play, and will get the Mountaineers at home next Saturday. That game will keep one team firmly entrenched in the race and another behind the eight ball. However, Texas’ loss to Oklahoma State also gives a little bit of life to Iowa State and even Texas Tech, both of which have two conferences losses. Iowa State owns the head-to-head over West Virginia and Texas Tech and still has to play Texas. While Oklahoma remains the overwhelming favorite to get back to Arlington, there are realistically three or so teams still in this thing with only a month to play. This should be fun.

CBS Sports was with you the entire way updating this story with the latest scores, highlights and analysis from Texas vs. Oklahoma State. If you are unable to view the live updates below, please click here.

Thanks for stopping by. 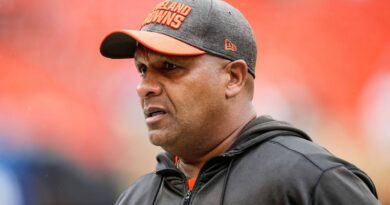