They just don’t get much more entertaining than that, do they?

No. 13 West Virginia and No. 17 Texas didn’t play the cleanest game. The officiating was, in a word, strict and both sides were understandably upset at the calls throughout the day. The end result was 21 penalties for 184 yards, most of them on West Virginia. Still, with eight lead changes and 21 points in the last six minutes, you couldn’t have asked for more fascinating Big 12 shootout, which the Mountaineers won in dramatic style 42-41.

The culmination of the back-and-forth battle was quarterback Will Grier’s incredible 33-yard touchdown to Gary Jennings with 16 seconds remaining, followed by Grier’s keeper on a two-point conversion. The battle for the Big 12 Championship Game is just heating up, so here’s what we learned from a long afternoon in Austin.

West Virginia has Grier, which means it always has a chance: Grier has been excellent for much of the season, save for a little October slump. Grier has rebounded nicely and finished Saturday with 346 yards passing and three touchdowns. When West Virginia absolutely needed plays, he obliged. Before his magical touchdown pass, though, Grier orchestrated an 11-play, 75-yard scoring drive in the fourth quarter to tie the game at 34-34. That was low-key a critical juncture for the Mountaineers, who were starting to show fatigue on defense against Texas’ punishing run game. Grier was 3-of-5 passing for 28 yards on that drive.

Then, of course, down seven points with less than 30 seconds remaining, Grier gave West Virginia the throw of its season.

That was followed by Grier’s keeper on the go-ahead two-point conversion.

Grier’s not a runner, but he can be when the situation calls for it. More importantly, when he’s confident, Grier is a hard quarterback to contain. It takes a lot of stones to make a throw like that and even bigger ones to stick with Grier on the keeper after Texas called multiple timeouts on the two-point conversion. But if you have a player who gives you a chance to win every game, then you have to ride with him when the game’s on the line. Holgorsen did.

Texas still has a ton of work to do defensively: First thing’s first: Texas was missing practically half of its starting defense by the end of this game. Nose tackle Chris Nelson was a game-time decision with an ankle injury. Defensive end Breckyn Hager and cornerback Davante Davis left the game early with injuries. One by one, it seemed, Texas lost players to injury.

Still, it’s discouraging what the Longhorns have done defensively in the past two weeks. After getting run over in every which way by Oklahoma State in Week 9, the Horns allowed 232 yards rushing to West Virginia at seven yards a pop. The Mountaineers were an average rushing team coming into Saturday (4.46 yards per carry, nine touchdowns) and had a lot of offensive line problems. (To boot, tackle Yodny Cajuste was ejected from the game for shoving a Texas player.) Still, West Virginia ran the ball successfully with Martell Pettaway, who went over the century mark, and Kennedy McKoy.

There are a lot of questions Texas still has to answer defensively, but getting beat up front by a team with a history of poor line play is a place to start.

Texas WR Lil’Jordan Humphrey is a monster:  There’s not much to say about Humphrey’s nine catches for 143 yards and a touchdown. The dude is a monster and was winning jump-ball situations all day. West Virginia couldn’t cover him and even when it looked like it had a play beat, Humphrey still came up huge. There’s just not much you can do about size and physicality, both of which Humphrey has.

The Big 12 Championship Game race is still fascinating: Regardless of what happens with Oklahoma and Texas Tech, the Big 12 Championship Game race should be fun through November. As of now, the Mountaineers and Sooners are on a collision course for their regular season-ending game, but things could get murky between now and then. Texas and Iowa State are still in this thing, and the Cyclones have the head-to-head win over the Mountaineers. Texas and Iowa State, by the way, meet on Nov. 17 in a weekend the Mountaineers will be watching closely. 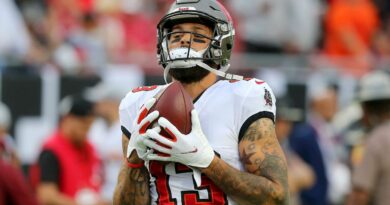