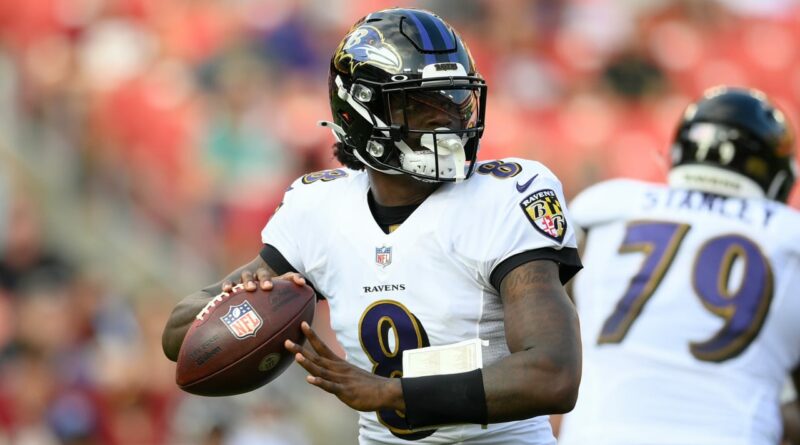 In The First Read, Jeffri Chadiha provides a snapshot of the hottest stories and trends heading into Week 1 of the 2021 NFL season, including:

— The top challenger to the Chiefs in the AFC.

— Why Chris Jones’ stock is rising.

But first, is a certain AFC power facing a closing competitive window?

OWINGS MILLS, Md. — The Baltimore Ravens understand the situation. They’ve been at this for the better part of the last three seasons, trying to climb up that postseason hill to ultimately find the elusive promised land, the place where they’re hoisting a Lombardi Trophy and declaring to the entire word We told you so. This is the year when they need to prove that they’re more than a collection of pretty highlights and failed predictions. If a championship can’t happen for them now, it’s fair to start wondering when that will ever be the case with this group.

The Ravens have been one of the most entertaining teams to watch in the NFL since Lamar Jackson became their quarterback midway through the 2018 season. They’ve also been the most maddening, as they’ve gone 31-8 overall in the regular season since Jackson’s emergence while tallying only one playoff win in the process. They’ll start this season with a Monday Night Football game against the Raiders, but the real question is where they’ll eventually end up.

“It’s now or never, really,” said defensive tackle Calais Campbell during a training camp interview. “There’s always tomorrow in theory but there really isn’t. We are running out of time. We have to figure out a way to capitalize on our talents. The Super Bowl is the only thing that will be good enough this year. Anything other than that, if we don’t get there and don’t win, we underachieved.”

This year’s training camp hasn’t increased the optimism surrounding the team, either. Jackson landed on the reserve/COVD-19 list back in July, and there are still lingering questions about his vaccination status. Running back J.K. Dobbins will miss his second pro season after tearing his ACL in August, while Justice Hill’s torn Achilles further saps the ground attack of depth. And as for all those wide receivers who are supposed to help Jackson grow as a passer? There’s been an assortment of injuries within that group, as well, with impressive rookie Rashod Bateman currently sidelined by groin surgery and Marquise Brown and Sammy Watkins battling their own ailments during camp.

The good thing about the Ravens is they’ve proven to be a resilient bunch. They’re at their best when the skeptics are circling, and they’ve thrived on the idea that a run-first offense backed by a fierce, attacking defense still has a place in a league filled with prolific passers. However, things are starting to feel a bit different around this franchise. The AFC is simply too loaded, and their margin for error, especially within the highly competitive AFC North, is precariously thin.

What’s even scarier is what the future holds after this year. The team has to decide how to handle an extension for Jackson, who has two years remaining on his rookie deal and will be certain to demand the kind of hefty contract that can cripple the type of roster-building that has made the Ravens so dangerous. They also have to manage the possibility of self-doubt creeping in if this year once again ends without any sort of prolonged playoff run.

“After a couple years of thinking Super Bowl, Super Bowl, and then you don’t get it, it’s easy to wonder where you go from here,” said tight end Mark Andrews (who agreed to a four-year, $56 million extension, NFL Network Insider Ian Rapoport reported Monday). “But that’s not where we’re at … I know personally that everyone in that locker room is more motivated than ever to get one.”

The motivation can’t be questioned, only the execution. While there are a handful of teams trying to show they belong in the conversation about who can upend the Kansas City Chiefs for AFC supremacy, Baltimore is the one that has been living in that space the longest. It’s even fair to say that the Ravens are at a point where just beating the Chiefs wouldn’t be enough to satisfy their expectations. As Campbell said, the window for this current team to win a title is closing fast, and it’s time to really wonder if they’ll ever be able to push through it.

Quick-hitting thoughts on storylines to track around the NFL.

1) Cleveland is the biggest threat to the Chiefs in AFC: The Browns have everything you need to challenge Kansas City. Their offense has a tough offensive line, a two-headed monster at running back (Nick Chubb and Kareem Hunt), explosive receivers (especially with the return of Odell Beckham Jr.) and a quarterback in Baker Mayfield who’s learned how to play within himself. It’s understandable to wonder if all those new faces on defense can gel quickly. It’s also impossible to deny the talent and potential on this squad. This is a team ready to break out, which is why Week 1 may not be the only time Cleveland and Kansas City knock heads this year.

2) Tampa Bay will have the league’s best offense: The Buccaneers closed the last season by scoring at least 30 points in each of their final seven games, including the playoffs. They figured out what works best for quarterback Tom Brady, and they kept every key member of that offense on the roster. Their depth chart also is so deep that wide receiver Antonio Brown and running backs Leonard Fournette and Giovani Bernard are listed as backups. Look, Brady is motivated to lead this team to consecutive championships, and he’s now had a full offseason with this franchise. What else do you need to know?

3) Jimmy G should be starting the season in San Francisco: 49ers head coach Kyle Shanahan hasn’t publicly settled the question of who will be starting at quarterback yet, but it’s clear that Jimmy Garoppolo is the right answer. As exciting and talented as first-round pick Trey Lance is, Garoppolo is the player who spent far more time working with the first-team offense in training camp and preseason. The 49ers also aren’t New England (where rookie Mac Jones beat out Cam Newton) or Chicago (where rookie Justin Fields is a more talented option than journeyman Andy Dalton, its Week 1 starter). Garoppolo has led this team to a Super Bowl. He’s been a solid option when healthy. Lance also played in just one game in his final year at North Dakota State and had only 17 total starts. His time will come, and it sounds like Shanahan will work him in. However, the 49ers are simply too good to rush Lance into duty at this stage.

The last quarterback taken in the first round of this year’s draft (at No. 15 overall) is now the one with the most attention placed upon him in Week 1. Jones beat out Cam Newton by displaying poise and precision. He needs to continue supplying both those qualities to a Patriots team that will contend for a playoff spot if its run game and defense are as good as expected.

The Kansas City Chiefs moved their Pro Bowl defensive tackle to end this offseason, and so far, the early reports are encouraging. Jones has impressed at his new spot throughout training camp, but the reality is that he’ll move up and down the line to find the best possible matchups to exploit. This dude could be in the conversation for Defensive Player of the Year by season’s end.

It’s no secret that the Broncos are betting big on their defense, especially given how they passed on Fields in Round 1 of the draft and turned the offense over to journeyman quarterback Teddy Bridgewater. So far, this defense certainly looks the part. They’ve got dominant pass rushers in Von Miller and Bradley Chubb, a ball-hawking secondary and plenty of depth. There’s also a lot of excitement about the ability of rookie cornerback Patrick Surtain II, the player the Broncos drafted over Fields at No. 9 overall. Miller, the 11th-year pro who missed 2020 with an ankle injury, says this is the most talented team he’s seen in Denver since the Broncos won Super Bowl 50. He’d better be right.

This story has reached the point where it’s impossible to forecast what is going to happen with the Houston Texans’ star quarterback. There’s no trade in the works, no reported movement on his off-field issues (including 22 lawsuits alleging sexual assault and misconduct) and no place for him in the lineup of what could be the worst team in the league, as Texans head coach David Culley named Tyrod Taylor his Week 1 starter. Watson wanted out of Houston when the offseason began. Today, he’s firmly in professional and legal limbo.

Pro Bowl guard Zack Martin is on the reserve/COVID-19 list, meaning the Cowboys head into their season-opening matchup with Tampa Bay on Thursday without their best offensive lineman. Good luck with that. Cowboys running back Ezekiel Elliott recently acknowledged that most of their runs go to Martin’s side for a reason. The Cowboys also are hoping to keep a fierce Bucs front seven from harassing quarterback Dak Prescott, who is returning from a broken ankle and also dealt with a mysterious shoulder injury throughout much of camp. This is going to be rough.

Jameis Winston should be a better quarterback after a season of sitting behind the recently retired Drew Brees and learning from head coach Sean Payton. The problem is the cast of characters he’ll be throwing to when the season begins against Green Bay. Star wide receiver Michael Thomas is on the physically unable to perform list — which will cost him the first five games of the season — while the three most experienced wideouts after him combined for all of 75 receptions in 2020. Ugh …

One question answered by an unnamed front office source.

What do you think of Miami Dolphins quarterback Tua Tagovailoa as he heads into his second season?

AFC PERSONNEL DIRECTOR: “I think his processing and decision-making need to speed up. When things get off-schedule, he looks uncomfortable. He hasn’t shown me the arm talent to play outside the structure of the offense as a lot of younger quarterbacks are doing today. He’s basically a touch thrower who hasn’t shown a real fastball yet … I also thought these were issues that showed up on tape when he was in college. He’s a talented player who has plenty of room to improve, but I never understood the ‘Tank for Tua’ hype that followed him (when he was still playing at Alabama).”

A simple ranking of the top five candidates, which will be updated weekly, depending on performance. Here is how it stands heading into Week 1:

My slowly evolving Super Bowl pick, which also will be updated each week, depending on performances: Tampa Bay over Cleveland. 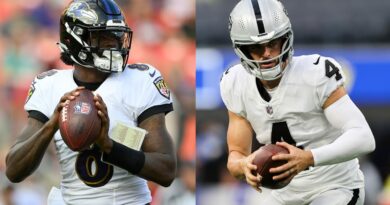 'Monday Night Football' preview: What to watch for in Ravens-Raiders