Home » NFL » The next Ezekiel Elliott? Trey Sermon’s late-season run for the ages 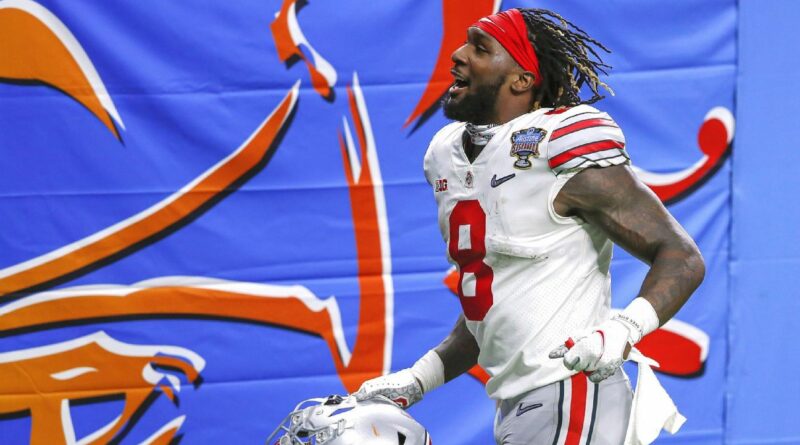 The casual smile gets you first. Then comes the all-knowing, perfectly timed glance up to the cameras.

It was all Ohio State running back Trey Sermon could do — cheesing it up for television as officials reviewed whether he scored a touchdown on a long run against Clemson in last week’s College Football Playoff semifinal. He knew — we all knew — he clearly did not.

Maybe the joke was on the rest of us. Sure, it became an instant meme. And no, that smile and glance didn’t sell officials on a touchdown that never happened. But Sermon’s deliberate look with pursed lips, a three-second window into his Ezekiel Elliott-like transformation into an unstoppable postseason force, delivered a message:

The world is only just seeing it now, after a two-game stretch in which Sermon has run for 524 yards, scored three touchdowns and become the biggest revelation to an Ohio State offense that had no real identity until he smashed Northwestern in the Big Ten championship game. His emergence has been years in the making, first as a prized high school recruit, then as an Oklahoma back who slowly fell from the top of the depth chart, and now as a Terminator-like force ready to bulldoze through and hurdle over defenders on his final quest to prove himself.

Sermon is on the brink of topping what Elliott did the last time Ohio State won a national title in the 2014 season. Elliott put together the most dominant three-game stretch in school history, with 696 yards and eight touchdowns in the Big Ten championship game and the CFP semifinal and championship games to carry the Buckeyes — and that is saying something at a program known for its elite, next-level backs.

The comparison is not lost on anyone now that the No. 3 Buckeyes are getting ready to play No. 1 Alabama in the College Football Playoff National Championship presented by AT&T on Monday at Hard Rock Stadium in Miami Gardens, Florida (8 p.m. ET, ESPN and the ESPN App). Sermon, in fact, is outpacing Elliott in rushing through two postseason games.

“A lot of great running backs that have come through here — and Zeke is one of the best running backs — just to be in that conversation, it’s an honor,” Sermon said this week. “I just feel pretty good about what I’ve been able to accomplish so far with the help of my offensive line.”

Sermon has done it with a resiliency that has become one of his hallmarks. And to understand why he kept pushing when so much appeared uncertain — between the current season itself and his role on the team — you have to understand his mother.

Natoshia Mitchell survived abuse and domestic violence, as well as the death of her 2-year-old son in 1993, six years before Trey was born. Her boyfriend at the time was convicted of the toddler’s murder and sentenced to life in prison. Mitchell testified against him at the trial. Living through that pain and immeasurable loss, Mitchell turned to her grandmother and aunt for support. She started to think about her life. What did she want out of it? Would the anguish define her or would she be able to move forward and use her own experiences to help others?

Mitchell decided she wanted to be someone others looked to as an example. She started to turn her life around after she divorced Trey’s father when her kids were in elementary school. She moved to Tampa, Florida, from across the namesake bay with Trey and his older sister, Oneisha, got a new job and started over.

Mitchell stopped dating and put her focus on them, went back to school and kept a watchful eye on who was around her children at all times. She enrolled Trey to play football at age 5, while Oneisha started cheerleading. Trey began on defense, and Mitchell fondly recalls that every time he tackled somebody, the PA announcer would say, “The Terminator strikes again!”

They eventually moved to Marietta, Georgia, and Trey played running back at Sprayberry High School. He was all set to have a breakout junior season, but after catching a touchdown pass in the season opener, he landed on top of a helmet and hurt his back. Doctors initially thought it was a strain, so he played the next week. His coach at the time, Billy Shackelford, recalled Sermon had 200 yards rushing.

“The guy could barely bend over and touch his toes,” Shackelford said in a phone interview.

Sermon saw the doctor again because he was in so much pain. He had a chipped bone in his back.

“It was an honest mistake, but he literally ran for 200 yards with a broken back,” Shackelford said. “That’s the perfect example of his toughness, his tenacity, his love of the game, and overcoming. He usually takes an obstacle and tries to find gold out of the situation. That’s a real asset to him, the way he’s been raised and ultimately the warrior that’s inside him.”

Mitchell said her insurance did not cover all of Trey’s required rehab and treatments, so she sold her car and moved with her kids out of their apartment and into a hotel for 11 months. She used the money she saved to get Trey top-of-the-line care.

“I just wanted to make sure he got the best treatment, and I wanted to afford to pay for extra treatment,” she said. “I was determined that he was going to get better, and he did it.”

By his senior year, the scholarship offers started rolling in. Sermon ultimately decided on Oklahoma. In 2017, Sermon was the Big 12 Freshman of the Year, second on the team with 744 yards rushing and five touchdowns. His first career score came in Ohio Stadium — a 10-yard catch from Baker Mayfield — in the Sooners’ 31-16 victory, during which Mayfield famously planted the Oklahoma flag at midfield.

Although he rushed for 947 yards as the Sooners’ starter the following season, Sermon seemed to fall out of favor in the rotation in 2019. His season ended after he tore the lateral collateral ligament in his knee that November. In March, he announced he would transfer. Sermon has maintained he simply wanted a fresh start, but Mayfield suggested in a tweet that former Oklahoma running backs coach Jay Boulware (who left for Texas after last season) had something to answer for:

Sermon ultimately chose Ohio State because he had developed a good relationship with running backs coach Tony Alford during his high school recruitment period. But the pandemic presented a new set of challenges. Sermon had to continue rehabbing his knee injury while in-person workouts in Columbus were not allowed. He ended up splitting his time working out with trainers in Houston and in Georgia. When he eventually was able to start work with teammates, his long-standing relationship with Buckeyes quarterback Justin Fields (they are both from Georgia) helped ease the transition. Even then, Sermon missed an entire offseason conditioning program and a chance to develop the natural chemistry and rhythm a running back needs to find success.

His plans for a fresh start nearly evaporated when the Big Ten decided in early August to postpone the start of the fall season. To make matters worse, the Big 12 opted to play. Sermon had to sit and watch his old teammates kick off their season, while he had no idea whether he would get the opportunity he so desperately wanted.

“He was devastated,” Mitchell said. “He thought in his mind, ‘I can’t prove who I really am.’ And that was the biggest thing for him, thinking, ‘Nobody gets to see who I am or what I can do. They saw a little bit of it, but they haven’t seen the real me yet.’ I kept trying to encourage him. He came back later, and he said, ‘Ma, I think we’re going to have a season.’ I said, ‘You’ve got to keep pushing; you’ve got to keep believing.'”

Once the Buckeyes kicked off in late October, Sermon had a hard time finding a role, as Master Teague III had the starting job. In the first four games, Sermon had 45 carries for 232 yards and no touchdowns. But Ohio State coach Ryan Day said he noticed a change in the Michigan State game on Dec. 5, as Sermon began to get a better feel for the offense, registering 10 carries for 112 yards and two touchdowns.

Still, Day never could have predicted what would come next. Ohio State and Fields could not get anything going in the Big Ten championship game against Northwestern. Then Teague got hurt. Day put all his faith in Sermon, who responded with a school-record 331 yards and two touchdowns, nearly matching his rushing total from his first five games combined (344).

“You’re seeing the best version of Trey,” Day said. “The best part is, when all that was going on, he never came into my office, never complained, never said, ‘I need more carries,’ none of that stuff. He just kept going every single day to work.”

Although Fields rebounded with a stellar six-touchdown performance in the CFP semifinal against Clemson, it is hard to forget how Sermon also dominated, finishing with 193 yards rushing and a score, in addition to his instant meme. (A look, by the way, his mom says he gives to her and his sister all the time.)

Mitchell was in New Orleans for the semifinal, and she said she plans to be in Miami on Monday night with her 9-year-old granddaughter, A’mia, who remains close with Uncle Trey.

Mitchell has stuck to the promises she made to help others, writing a book about her experiences entitled, “When My Soul Cried: Healing, Forgiveness and Releasing.” She is on track to earn a PhD in psychology from the University of Arizona in April. And she established Arise by Faith Inc., a nonprofit organization for domestic violence and family bereavement that is geared toward providing resources and assistance to those who need help.

The resiliency Mitchell has shown has set a lifetime’s worth of examples for both of her children.

“I’ve just seen all the things that she’s been through, how she was able to just persevere, still continue to work hard for our family, and I feel like that just helped me throughout my career, because I’ve faced a ton of challenges, a bunch of adversity,” Sermon said. “But I know that, again, there’s light at the end of the tunnel, so I just have to keep working hard and I know everything will pay off.”