An injured ankle will keep quarterback Ryan Tannehill off the field for a second week in a row.

Tannehill is officially inactive for the Tennessee Titans’ Sunday night game at the Kansas City Chiefs. In Tannehill’s absence, rookie QB Malik Willis will get his second career start in as many weeks.

Tannehill, who was injured in a Week 7 win over the Indianapolis Colts, was listed as questionable for Sunday’s game, and he will miss his second game since taking over as the Titans starter back in 2019.

Without their starting quarterback, the AFC South-leading Titans will have an even steeper hill to climb to get past Patrick Mahomes and the AFC West-leading Chiefs.

Willis threw the ball just 10 times in his debut last week, completing six passes for 55 yards, but it made no matter as the Titans leaned heavily on running back Derrick Henry in a 17-10 win over the Houston Texans.

It’s difficult to fathom the game plan will be all that different for Tennessee on Sunday night as it looks to add on to its five-game winning streak.

Willis, a third-round pick, has appeared in three games this season, completing 7 of 14 passes for 50 yards with zero touchdowns, an interception, and 28 yards rushing on nine carries. He’ll be backed up by Logan Woodside. 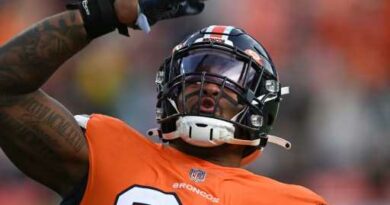 Kiszla: Dre’Mont Jones would be a fool to give struggling Broncos a hometown discount after trade of Bradley Chubb