Tom Brady’s return to the playing field was a sight for sore eyes in Tampa Bay.

The occasion designated Saturday night’s preseason finale as a critical juncture to an abnormal month of August for the Buccaneers and their star quarterback. Following the Bucs’ 27-10 defeat to the Indianapolis Colts, Brady’s postgame availability was also appointment viewing as he addressed the media for the first time since returning to the club earlier in the week.

“It’s all personal,” Brady said, via the Tampa Bay Times. “You know, everyone has got different situations they’re dealing with so we all have really unique challenges to our life. You know. I’m 45 years old, man. There’s a lot of s— going on. So you’ve just got to try to figure out life the best you can. You know, it’s a continuous process.”

Brady offered no details on the reasoning of his 11-day hiatus, which was a planned excusal for personal reasons. Of course, the unusual absence brought with it plenty of theories surrounding the 45-year-old QB and several non-football questions for his team as a whole. With a week’s worth of practice under his belt, Brady on Saturday showed why his teammates have downplayed the potential consequences of his absence all along.

Brady’s presence brought forth the only opening drive of this preseason that ended in points for the Bucs. It didn’t come without an adverse situation, either. Facing fourth-and-3 at midfield, Brady found his first completion of the game to convert a crucial first down and proceeded to connect on his next five attempts to maintain an 11-play, 66-yard drive that ended with a 30-yard field goal by Ryan Succop.

“I’ve played a lot of football in my day,” Brady said. “A lot of seasons, a lot of games, a lot of practices so I feel pretty good.”

Under the guise of a two-minute offense, the Bucs looked determined with Brady at the helm. His six total completions on the night were spread out to five different receivers, including veteran newcomer Julio Jones, who hauled in the biggest play of the opening drive with a 20-yard catch along the sideline to get the Bucs in the red zone.

“Julio is really easy to have chemistry with,” said Brady. “He’s an elite wide receiver in the NFL.”

Brady’s night ended after the opening drive, completing 6 of 8 passes for 44 yards. While Brady’s return to the playing field generated a positive outlook, the Bucs didn’t walk away from the preseason finale unscathed.

Center Robert Hainsey left the game in the second quarter due to an ankle injury that could possibly threaten his availability for Sept. 11’s Week 1 opener versus the Cowboys. Hainsey’s backup, Nick Leverett, also exited the game early due to a shoulder injury.

Hainsey has been working toward becoming the Bucs starting center for 2022 after Ryan Jensen suffered a significant knee injury on July 28, and getting accustomed with the second-year player was a major reason for Brady playing in the final preseason game.

“It’s a tough position. I mean, that’s a big position for an offense, the center position,” Brady said of Hainsey. “Obviously, we all hated to lose Ryan. The extent of that we’re still trying to figure out but it’s going to be a while. Hainsey stepped in and has done a good job. Worked really hard to gain the confidence of his teammates last year and the trust of the whole organization and he’s going to have to do a great job.”

Saturday’s dings along the offensive line continues an alarming trend for the Bucs. Starting guard Aaron Stinnie suffered a season-ending knee injury in Week 2 of the preseason, and any more extended absences of Brady’s blockers can’t be afforded.

The most important absence, however, did come to a visual end with Brady orchestrating a successful drive in a Bucs uniform. Despite the hiccups along the way, Brady and Co. are looking to move forward to the 2022 season with the hope of rendering the past month as a mere afterthought through their success on the field.

“We’ve had some injuries with the line we’re all dealing with but you know, try to put together a good unit to go out there and compete,” Brady said. “We’re playing against a really good opponent in Dallas. It’s going to be a really good test for us.” 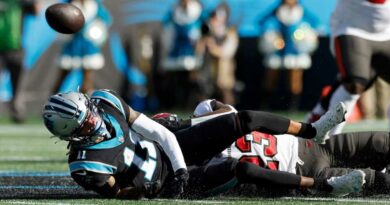