Home » NFL » Tom Brady vs. Joe Montana; too much heat on Kyle Shanahan 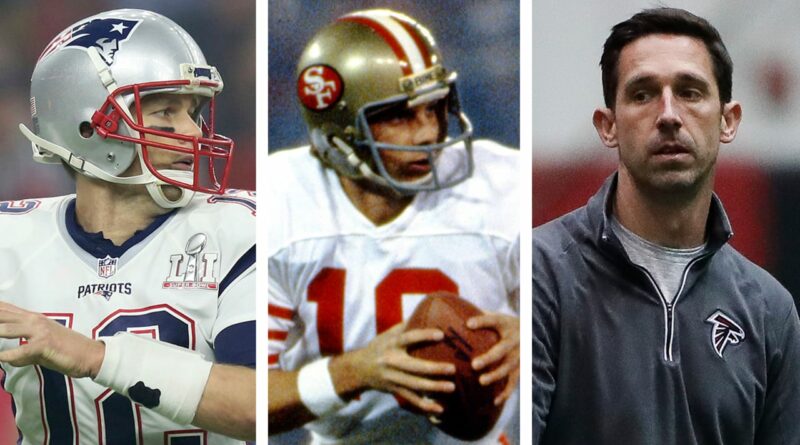 Chris Wesseling has had it up to HERE with the faulty football logic he’s seen flying fast and furious lately. Below, he thoroughly — if a bit crankily — debunks some of the more galling popular fallacies that have taken root:

Stop the Brady vs. Montana insanity

Can I interest you in a trip down the rabbit hole, where the delusional sow chaos and confusion? Try searching “Montana never lost a Super Bowl” on Twitter. It’s an atavistic sinkhole where logic goes to die an uncivilized death.

Joe Montana’s Super Bowl record is immaculate. He won all four appearances, once in career-defining fashion versus Cincinnati and twice more in utterly convincing blowouts.

What the addled Montana acolytes would have you believe is that those four Super Bowl victories render all other data irrelevant.

Painting themselves into a corner of insipid ignorance, they are forced to take the position that missing the postseason altogether or falling in the early playoff rounds is a greater feat than advancing all the way to the season’s final game. Taken to its logical extreme, the faulty proposition would also trumpet the perfect Super Bowl records of Trent Dilfer, Brad Johnson and Eli Manning at the expense of Tom Brady and his 5-2 mark.

By this warped thinking, Brady is punished for a pair of see-saw Super Bowl losses while the three consecutive one-and-done postseason appearances — without a single touchdown — in the prime of Montana’s career are considered immaterial.

Montana managed to reach the postseason tournament 11 times. Brady has led the Patriots to the AFC Championship Game an incredible 11 times — and counting.

Montana was benched for Steve Young in the third quarter of a playoff game, shopped around the league and ultimately traded at age 36 — unthinkable experiences for Brady.

While it’s an unshakable truth that championship banners fly forever, the fetishizing of rings tends to overshadow the tremendous accomplishment of emerging victorious through the gauntlet of the conference playoff field.

The idea of variance can be difficult to grasp. Just as Brady is a pair of coaching brain cramps away from dropping to 3-4 in the Super Bowl, he’s also a pair of Asante Samuel and Wes Welker drops away from a perfect 7-0 résumé. If Bengals cornerback Lewis Billups hadn’t bungled an easy interception in the end zone, similarly, Montana wouldn’t have been deified for the past three decades.

If you want to present a legitimate case for Montana, point to his peril-strewn road to the Super Bowl through Bill Parcells’ Giants, Joe Gibbs’ Redskins, Tom Landry’s Cowboys and Mike Ditka’s Bears. Highlight the brutal hits Montana absorbed in the 1980s compared to the free ride today’s quarterbacks are given in the pocket.

The flip side, of course, is an even strongerargumentforBrady, whose latter years are starting to resemble Michael Jordan’s transcendent second act from 1995 through 1998.

There’s a complexity involved in comparing across eras that naturally discourages declarative statements. There’s no shame in drawing attention to the uncanny similarities between Brady and Montana rather than attempting to diminish the accomplishments of either.

Brady estimated the Patriotsneeded 30 different plays to tilt the inconceivable Super Bowl LI comeback in their favor. One of the most pivotal of those plays was Trey Flowers’ sack of Matt Ryan with just under four minutes remaining, which ultimately prevented Atlanta from burning the clock or taking a two-score lead.

Play-caller Kyle Shanahan has come under deserved fire for the poor judgment that came back to haunt the Falcons in the most heartbreaking manner possible. Considering field position and game clock, a field goal is nearly as valuable as a touchdown in that situation. Why not just run the ball and let your automatic kicker stake your team to a forbidding 11-point cushion?

In the immediate aftermath, the 20/20 hindsight failed to consider several key factors: Shanahan called for max protection with six blockers on four pass rushers (Flowers was blocked by both guards before beating center Alex Mack), Ryan held the ball for more than four seconds and the Patriots’ chances of winning — as ESPN.com’s Bill Barnwell noted — increased from 1.4 percent to a still minuscule 4.9 percent after the Flowers sack, Jake Matthews’ subsequent holding penalty and the third-down incompletion.

Contrary to the drive-by criticism, Shanahan’s brazen play-calling in that sequence was not alone in sealing Atlanta’s Super Bowl ignominy. The Falcons’ pass rush disappeared, the secondary was outplayed, the running game cratered, the offense couldn’t stay on the field and the coaching staff mismanaged timeouts as well as the play clock.

To second-guess Shanahan, even in breezy fashion, is understandable. He and Dan Quinn will wrestle with nightmares in the near future and fantasize about “what if” scenarios for the rest of their lives. To take the denigration a step further, though, and suggest that Shanahan will never shed the “choker” label is not only out of bounds but also incredibly myopic.

On Monday’s edition of “The Tony Kornheiser Show,” Kornheiser emphasized that Shanahan will embark on his head coaching career with the 49ers as a “compromised guy” after the Super Bowl gaffe.

Kornheiser has orchestrated the premier sports radio show in America for the past two decades, in my estimation, but that take is hot garbage.

The Falcons were in position to win the Super Bowl in large part due to Shanahan’s brilliance as the best play designer and most creative offensive schemer in the NFL’s most sophisticated era.

Bears quarterback Brian Hoyer, who played under both Belichick and Shanahan, recently identified several important similarities between the two masterminds.

Ascribing a black cloud to the freshly minted Assistant Coach of the Year ignores Shanahan’s obvious coaching gifts. Worse, it’s a slap in the face to the football truism that adversity breeds strength.

As is the case with most jokes, there’s a kernel of truth behind Bennett’s cash-grab quip.

Bennett must understand New England won’t be the team to overpay for his services. The one financial constant of the Belichick era is a steadfast refusal to set the market for any player, a policy that leaves Bennett in limbo.

The 29-year-old tight end has already rejected an offer worth $7 million per year, per NFL Network Insider Ian Rapoport, and the Patriots won’t go over Rob Gronkowski’s $9 million annual figure in their attempt to keep a player acquired on the cheap last offseason.

If another team is willing to overpay Bennett now that his troublesome image is fully rehabilitated as a team-first champion, the Patriots will let him walk. At which point, fans of his new team will be justified in asking why the front office wasn’t willing to roll the dice on Bennett when the Bears’ asking price was a paltry fourth-round draft pick a year ago.

Drafting in the latter portion of the first round every year, Belichick takes a proactive approach in personnel areas that are “less populated.” Overpaying for Bennett, a risk to backslide into a locker-room nuisance with a less stable organization, is reactive thinking.

Patrick Mahomes is having his best season yet for Chiefs, confirmed by one incredible stat