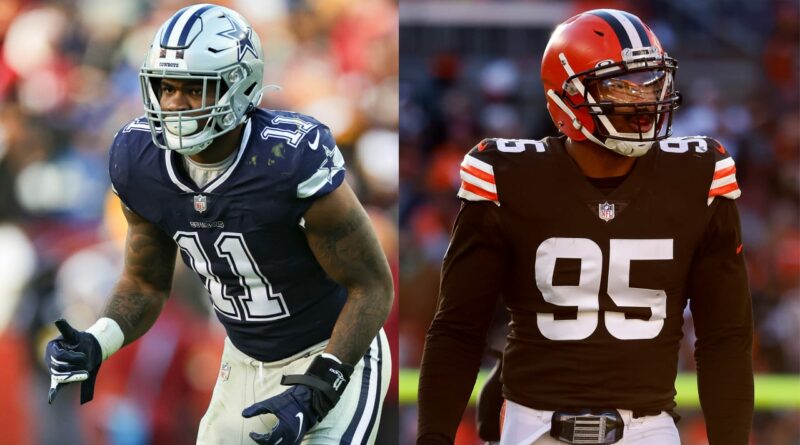 With one month left to play in the 2021 NFL season, it’s about time we attempt to sort out a tightly packed race for Defensive Player of the Year.

Last season, it appeared as if Pittsburgh’s T.J. Watt would take home the honor for the first time in his career. But the voters had something else in mind, sending future Hall of Famer Aaron Donald around the final turn and past Watt, beating him to the finish line to take home his third DPOY of his career.

What about this season? Well, there are more than just two contenders entering the final few laps of the season with a chance to win the honor, and most everyone on this list has a strong enough statistical résumé to at least garner some consideration.

I’ve been given the somewhat difficult task of sorting this out and ranking the candidates for the 2021 Defensive Player of the Year. My mentions are open — I know you’re coming, Steelers fans — so let your angry tweets fly. The final month will determine this debate for all of us.

Garrett has been trending toward this spot in this type of ranking for the last few years, but 2021 has been his best season to this point. Garrett became the Browns’ all-time leader in single-season sacks in a Week 14 win over the Ravens, further beefing up his candidacy by forcing a fumble on the sack that gave him the record and returning it for a touchdown. Garrett is a generational talent who simply cannot be left in one-on-one situations, because he’ll either burst around blockers with his rare athleticism, fool them with inside moves or use his raw strength to rush through them to the quarterback. His 4.2 percent sack rate leads all defenders (minimum 300 pass rushes), while his 53 QB pressures and 14.9 percent QB pressure rate lands him fourth and fifth in each category. He’s also second in sacks in the NFL with 15, just one behind T.J. Watt. Add in his two turnovers caused by pressure and one defensive touchdown scored last weekend, and you have an elite edge rusher whom defenses must always account for and can only hope to limit.

Parsons flashed in the first professional game of his career, way back in August in Canton, Ohio. He wasn’t on the field long, but when he was, he demonstrated the sideline-to-sideline ability and high motor that was sure to make him an every-down linebacker. Parsons followed through on that promise, prompting Dallas to release Jaylon Smith and hand the full-time keys to the rookie, who has seized the opportunity. A reliable defender capable of cutting down running backs as they hit the edge, he’s also quickly become a lethal pass-rushing weapon, recording 12 sacks in 13 games played. His quarterback pressure rate of 20.1 percent is the highest single-season mark in the Next Gen Stats era (since 2016; minimum 200 pass rushes), and his sack rate of 5.2 percent is the second-highest. His 46 QB pressures land him eighth among all defenders this season. Parsons can do it all, and he’s quickly vaulting up the rankings of linebackers in the NFL in only his first season. A shoo-in for Defensive Rookie of the Year, he just might end up taking home the award we’re talking about in this list, too.

Watt’s rate of production would place him atop this list, if he’d only been able to play in every game this season. Injuries are the main hurdle standing between Watt and the award many expected him to win in 2020. He’d already missed two games heading into last Thursday’s loss to Minnesota, which he then left early due to a groin injury. But when he’s been on the field, he’s still been very effective, posting the highest sack rate (6%) among rushers with a minimum of 250 pass rushes. His 44 total QB pressures are tied for 10th in the NFL, and his three turnovers caused by pressure are tied for eighth. Oh, and he leads the league in sacks despite missing roughly 10 quarters of football. He just hasn’t been as available as the others on this list, which might end up hurting his candidacy, even though his numbers have been fantastic.

One need not look further than Monday night’s win over the Cardinals to find a four-quarter example of how valuable Donald is to his team, and how he remains among the most elite of defenders. Donald began the game with a sack of Kyler Murray, deflected a pass that resulted in an interception, then logged another takedown of Murray on the game’s final play to finish off a three-sack night. It was an excellent 60-minute-long bit of evidence of just how much Donald can impact a game, including when his sheer power drew holding flags that pushed the Cardinals backward. Here’s another quality example: Of the top 10 players in sacks in the NFL, Donald is the only interior defender in the group, with 10 sacks on the year. He owns the eighth-best pressure rate among interior defensive linemen (minimum 250 pass rushes) at 10 percent, ranking eighth in the entire league in defensive stops (53) and ninth in total QB pressures. Donald won DPOY last year in a bit of a surprise to those expecting it to go to T.J. Watt, and though there might be a few more front-runners ahead of him at this point, it wouldn’t be a shock to see him win it again.

The one-per-game interception rate Diggs started the season with hasn’t quite kept up, but he still leads the NFL in picks (nine), and that’s the main reason for Diggs’ candidacy. Diggs became the subject of plenty of discussion early in the season with his streak of interceptions, which has helped elevate his ballhawk rate to 23.3 percent, the best mark among defenders with a minimum of 50 targets as the nearest defender in coverage. His six interceptions as the nearest defender in coverage against receivers aligned wide are the most in the league. The only factor holding him back is his performance in between the picks, which hasn’t earned him a stellar grade from Pro Football Focus. But when it comes to making plays on the ball, Diggs has proven he’s among the best, which will certainly get his name in the hat here.

Bosa returned from an ACL injury that cost him all but two games last season and began his 2021 campaign with three sacks in his first two games, but for whatever reason — San Francisco’s slow start probably didn’t help — Bosa seems to have flown a bit under the radar compared to other DPOY candidates. He should not be overlooked, as Bosa has proven to be a highly effective edge rusher throughout 2021, posting the third-best pressure rate in the NFL (minimum 300 pass rush snaps) at 14.9 percent. His 52 total QB pressures rank fifth, and his four percent sack rate ranks third. Bosa’s performance is even more impressive considering how his 2020 season ended.

Judon has led the Patriots’ defensive transformation in 2021, and if you’re having trouble identifying him on the field, just look for his trademark red sleeves. Judon’s arrival was part of a massive offseason spending spree by the Patriots, who have returned to contention thanks in large part to their stingy defense. Judon has recorded 12.5 sacks, which currently ties him with Cincinnati’s Trey Hendrickson for fifth in the league. His 4.2 percent sack rate is tied for the NFL lead among rushers with 300 or more pass rush snaps, and his QB pressure rate of 14.6 percent ranks sixth. He even lands in the top 10 in QB pressures with 44. Judon probably won’t win the award, but he’s at least deserving of some recognition in a space like this.

The 2021 season has taught us that Jackson’s performance over the last couple of seasons was not a fluke. He is the second Patriot on this list and makes it here because he currently ranks second in the NFL in interceptions (seven) and is tied with Trevon Diggs for the league lead in passes defensed with 17. His résumé is similar to that of Diggs, with a ballhawk rate that lands just behind Diggs’ at 22.7 percent. He’s also just about as effective when defending receivers along the perimeter, recording four interceptions against wideouts aligned wide, tied for third best in the NFL. With two players on this list, it’s no surprise the Patriots currently sit atop the AFC standings.

Byard vaulted into the discussion for the award thanks to a red-hot, five-week span in which he recorded four of his five interceptions on the season. No one has been better when it comes to making plays on the ball, as Byard owns the league lead in ballhawk rate at 29.5 percent (minimum 40 targets). Safeties tend to have a bit of an advantage coming over the top, but Byard’s interceptions haven’t simply come by playing center field. When he is targeted deep, Byard is the best at making plays on the ball there, too, posting a ballhawk rate of 40 percent on targets of 10-plus air yards. The message is simple: Don’t test Byard deep, or he’ll likely make you pay. That’s good enough for DPOY consideration, even if he won’t win it.

Hendrickson’s breakout 2020 campaign had many wondering whether it was simply a fluke, a product of playing opposite Cameron Jordan in New Orleans. A new home — Cincinnati — has helped Hendrickson prove those doubters wrong. Hendrickson leads the lead in QB pressures with 62, he’s tied for the NFL lead in turnovers caused by pressure (five) and he owns the highest QB pressure rate among defenders with at least 250 pass rush snaps at 19.2 percent. He’s become known for getting home, and his 3.9 percent sack rate backs that up as the sixth-best mark in the league. He’s tied for fifth in the league with 12.5 sacks, and he’s certainly been worth every dollar Cincinnati spent on him in the offseason.