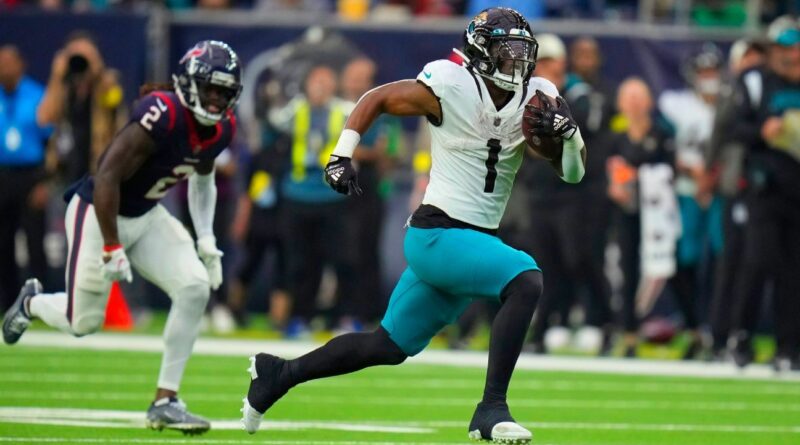 HOUSTON — Running back Travis Etienne Jr. jolted a stagnant Jacksonville Jaguars offense with the team’s longest touchdown run of the season and longest of his career Sunday against the Houston Texans. Defensive end Josh Allen and cornerback Tyson Campbell didn’t wait long to add big plays of their own.

On first down from the Jacksonville 38-yard line, Etienne took the handoff from Trevor Lawrence and ran through a gaping hole on the left side of the formation. Left tackle Walker Little and tight end Chris Manhertz sealed the inside, and receiver Christian Kirk blocked cornerback Tavierre Thomas to the outside.

Safety Jalen Pitre and cornerback Desmond King II managed to get hands on Etienne, but he ran through both players for 62 yards to put the Jaguars up 14-0. Etienne’s previous career long run was 49 yards, which he did against the Denver Broncos and New York Giants.

Two plays after Etienne’s run, Allen sacked Texans quarterback Davis Mills and forced a fumble that Campbell picked up and returned 12 yards for a touchdown. That was the Jaguars’ third defensive touchdown of the season and the first for Campbell.