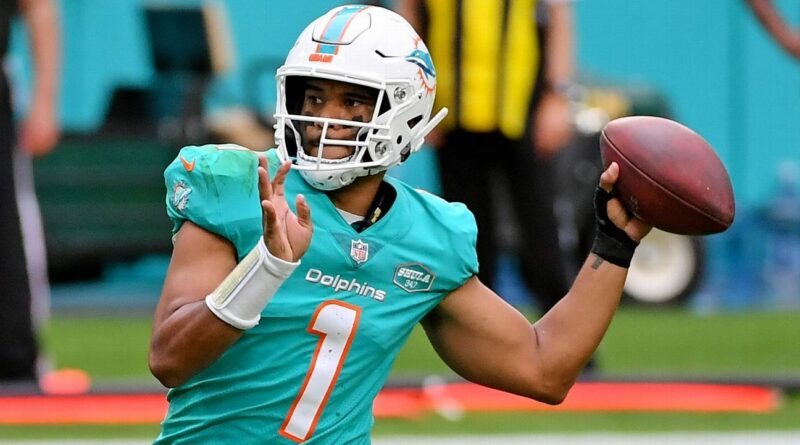 DAVIE, Fla. — Tua Tagovailoa believes he can be the Miami Dolphins’ franchise quarterback but knows he has to prove it with better play in Year 2.

Tagovailoa is coming off a rookie season where he went 6-3 with a 64.1% completion rate, 14 total touchdowns to five interceptions. But the former Alabama star was replaced twice in the fourth quarter by veteran Ryan Fitzpatrick and struggled at times to throw the ball effectively downfield.

With the Dolphins in the thick of offseason quarterback speculation for the second consecutive year, Tagovailoa was asked whether he is convinced that Miami is all-in on him as the franchise quarterback.

“In my mind and in my heart, I would hope so,” Tagovailoa said Monday during an interview with Sirius Mad Dog Radio. “With the way things went last year, you always have to prove yourself to do better, and I want to do better.”

Dolphins coach Brian Flores told ESPN last month that he’s “excited about the future with Tagovailoa,” and the Dolphins believe in him. Dolphins general manager Chris Grier also said last month that Tagovailoa is their starting quarterback and they are happy with his development.

Tagovailoa told Sirius Mad Dog Radio that he hadn’t heard the Watson trade rumors until his agent told him about them, but “that’s something that would be out of my control regardless.”

“That would be a decision of the Dolphins organization,” he said. “I have to control what I can control — work hard and do well next season.”

Tagovailoa was also honest in his evaluation of his 2020 season saying he “would describe my rookie season as below average. This past season wasn’t up to the expectation that I have myself.”

If the Dolphins do move forward with Tagovailoa, as is their current plan, the focus would be on his Year 2 improvement. He told the Dan Patrick Show that there’s a “big difference” in his health this offseason compared to last year, when he was coming off serious hip surgery, and he can focus this year on improving mental elements of his game.

The Dolphins have already made it a focus to build around Tagovailoa early in the 2021 offseason, including hiring his former Elite 11 high school camp coach Charlie Frye as the their quarterbacks coach. They also spent significant time at the Senior Bowl getting to know Alabama star receiver DeVonta Smith and running back Najee Harris; both are fits for Dolphins’ offensive needs, have a great relationship with Tagovailoa and could be options for Miami to select with each of their first-round draft picks (Nos. 3 and 18).

When asked by Sirius Mad Dog Radio about reuniting with Smith, Tagovailoa admitted the two have already talked about rekindling their Crimson Tide magic a couple of times this offseason. He noted it would “very special” and “very exciting,” citing their chemistry.

Sources: Missouri-LSU to move because of storm