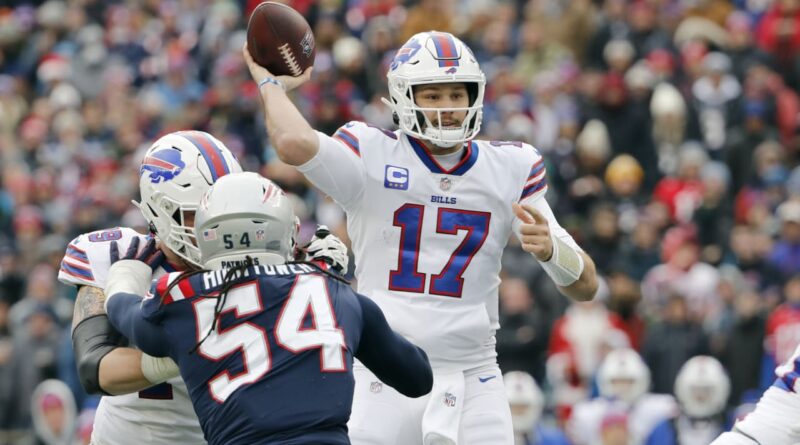 FOXBOROUGH, Mass. — The questions emerging from that blustery night three weeks ago were pointed and ugly. Why couldn’t the defense stop the run when it knew it was coming? Why couldn’t the offense muster anything even when the rifle-armed quarterback could slice a pass through the gale? Why were the Buffalo Bills so talented, but so maddeningly inconsistent? And, most urgently, could they find the answers before the season slipped away?

On Sunday, the Bills finally summoned the performance that should silence the questions, that will stop the doubts. They were undermanned but dominant, the New England Patriots were sloppy and sleepy, and the power in the AFC East swung back to Western New York with two games to go. The Bills’ 33-21 victory Sunday, in what amounted to a division-title game, gave the Bills the division lead because of tiebreakers and — just as important — lived up to expectations for the Bills as one of the most complete teams in the league. The Patriots, who have been mistake-riddled and lackluster in two straight games — both losses — fell into the AFC’s crowded wild-card pool, still almost assured of making the postseason, but are faltering at the worst possible time.

The turnaround from that miserable Monday night in Buffalo was so complete, so dramatic, that ﻿Micah Hyde﻿ and ﻿Jordan Poyer﻿, the Bills’ safeties who were irate at postgame questions about whether the team was soft three weeks ago, were spotted gleefully jawing with Patriots fans behind the end zone after an interception by Hyde ended the game. Head coach Sean McDermott, who three weeks ago didn’t want to give Bill Belichick too much credit for coming up with the run-exclusive game plan that beat the Bills, made a point of mentioning how well-coached the Patriots are and how much respect the Bills have for them.

The weight of expectations in the NFL is heavy and the Bills had seemed to be a bit staggered by that weight this season, struggling especially with consistency. It showed in the strain after that first loss to the Patriots. On Sunday, the heaviness seemed to lift for the first time this season.

“It’s hard to follow up a season like last year with a similar season,” McDermott said after Sunday’s win. “That’s part of the challenge.”

There is little question the Bills proved something Sunday about their mental toughness and fitness for a playoff push. They were a bit emotionally unraveled by the earlier loss to the Patriots, and they had not won two games in a row since early October. With the exception of defeating the then 1-0 Miami Dolphins in Week 2, they also had not beaten a team that had a winning record at the time of the game until Sunday. And they came into this game missing two key receivers and with a shuffled offensive line.

A stumble by the offense would have been understandable, particularly because the Patriots entered the game as the league’s top scoring defense, allowing just 16 points per game. But a stumble would have put the Bills’ playoff hopes in peril.

Quarterback Josh Allen, who threw for 314 yards and three touchdowns and rushed for 64 yards, did not want to talk about how much this performance meant under these conditions, although he joked that the protection he got from the makeshift offensive line was probably the result of the nice watches he gave them for Christmas. But he did note what it meant to the team to take an early lead and to have the confidence of McDermott, who uncharacteristically went for it four times on fourth down, with the offense converting three of them.

If this is what the Bills’ groove looks like, it should shake up the rest of the AFC, because the Bills were nearly unstoppable by one of the league’s best defenses. They were able to move the ball with the run and pass, with rollouts and deep shots. They piled up 428 yards. They opened with a 13-play drive. They scored on six of their nine drives and never punted. They held the ball for 10 minutes more than the Patriots did. They ran 75 plays compared with 60 for the Patriots. Isaiah McKenzie﻿, who had been benched earlier in the season and had just seven receptions entering the game, filled in for Cole Beasley﻿, who missed the game with COVID-19, and recorded 11 receptions for 125 yards and one touchdown. And the Bills, with the Patriots back in striking distance, finished with a 13-play drive, taking five minutes off the clock and making it a two-score game. It was exactly what the game three weeks ago was not — a disciplined situational football showcase.

What future Patriots opponents are likely to look at was the Bills’ ability to score early and often to put more of the game on Mac Jones’ shoulders. While the Bills still could not stop the run — the Patriots ran for 149 yards — the Patriots had to lean on the pass because they were playing from behind. Jones completed just 14 of 32 passes for 145 yards and two interceptions. The Patriots converted just one of 10 third-down attempts.

The lingering question about Jones is whether he can do more for the offense than manage it, whether he can elevate the team to overcome deficiencies elsewhere and whether he can bring the Patriots from behind in a crucial game. He may be able to eventually do that, and he could certainly get more help from receivers who repeatedly dropped passes, although Jones blamed his own accuracy. Comparing Jones to Allen is unfair at this point in their careers, but it is also inevitable. The Patriots need more from Jones, particularly to avoid the slow starts that are suddenly plaguing them.

On Sunday, they needed what Allen provided the Bills.

“We’re where we want to be right now,” Allen said. “We have to finish. We can’t look too far into the future.”

For the first time in more than two months, the Bills’ future looks as vast as the hopes that nearly smothered them.

What could have been: What if Tim Tebow converted to tight end 10 years ago?