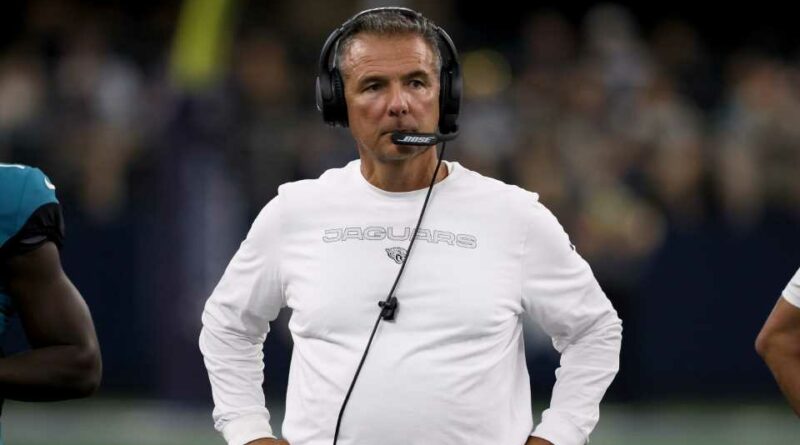 Where have you gone Jimmy Johnson and Barry Switzer? If the two leaders of the Cowboys’ last Super Bowl dynasty would be considered the best success stories for modern college coaches succeeding in the NFL, then Urban Meyer should be known as the ultimate failure following that model.

Excluding Pete Carroll, who won two national championships at USC before winning a Super Bowl early in his long tenure with the Seahawks, it’s been a shaky run of simliar hires in more recent history. Carroll also is a bit of an outlier, given he had previous pro head-coaching experience with the Patriots and Jets before his return.

Meyer was the 12th first-time NFL coach from the college ranks since 2001. Only two remain in the league — Kliff Kingsbury, who seems like a long-term keeper with the Cardinals, and Matt Rhule, who might be fired soon by the Panthers. No one can match Meyer’s futilty in terms of terrible record, creating an awful culture and being dismissed short of one full season. Only one comes close to that — and he quit on his team.

Here’s looking back at the mostly doomed dozen, starting with the worst (Meyer) to the best (Meyer’s former college archrival)

There were plenty of red flags why the Meyer style, which allowed him to win national champioinships at Florida and Ohio State, would be a major flop in the NFL. He never connected with the coaches and players, forcing owner Shad Khan to eat his questionable investment. Heck, multiple reports say he dragged everyone down on the Jaguars vs. lifting them, led by rookie No. 1 overall quarterback Trevor Lawrence.

Like Meyer, Petrino also has made some bad off-field decisions while also alienating personnel on the field around him. He wasn’t the right character for the NFL, either, because well, he didn’t have the character or conduct needed to succeed. That was evident when he walked away from his team before his first season was finished to take a job at Arkansas.

Schiano was Meyer’s one-time defensive corodinator at Ohio State. Schiano gained some NFL steam with his revival of the Rutgers’ football program, but his personality and mind-set wasn’t good for the pros. His “Sopranos”-style ad for Rutgers football was a more impressive job.

The writing seems on the wall as Rhule works for another demanding owner, David Tepper. The firing of innovative offensive coordinator Joe Brady and being too tied to his Temple/Baylor ways, along with some bad decision-making, hasn’t fit well in the NFL.

The Ol’ Ball Coach was superior leading his special offense with his alma mater Florida. That did not carry over to the NFL, where he struggled to find the right QB (he started four different QBs at least four games). Spurrier’s mistake was forcing a college style into a pro scheme.

Taking over Cleveland shortly after the franchise’s return to the NFL in 1999 wasn’t the best position to succeed. Davis did manage to get the Browns to the playoffs once, which might be miraclous in hindsight. But he just couldn’t create the big-time NFL magic of his mentor Johnson.

Saban’s two-year tenure between his legendary national championship coaching at LSU and Alabama was an experiment to see if he could deliver on the level of his old long-time NFL buddy Bill Belichick. Saban did have a few moments, including beating Belichick and Tom Brady, but it was clear his true defensive-minded interests lied in becoming the Belichick of college football history.

Marrone had an identical record to Saban in his first NFL stint transitioning in-state from Syracuse. He did get a little better later in leading the Jaguars to an AFC championship appearance vs. the Patriots. He still has the feeling of “just a guy” with offensive coaching leanings.

Kelly had a bit of a roller coaster ride implementing his strong offensive mentaility from Oregon, having some immediate success with Nick Foles as his quarterback. He led the Eagles to a nice rebound playoff season after the team parted ways with Andy Reid (a rather big mistake). But the other non-schematic aspects of the job didn’t work out the way his obsessiveness did (and does again) in college.

BoB got a lot of heat for Houston underachieving and some the way he handled his personnel  — which got awful at the end — but on the bottom line, Belichick’s one-time offensive corodinator had relative success coming over from Penn State. Four division titles in six full seasons was solid, but there was a definitive sense the Texans kept flopping in the playoffs because of O’Brien’s questionable big-game coaching.

Kingsbury was hired in conjunction with the No. 1 overall drafting of quarterback Kyler Murray. It’s taken a few seasons, but Kingsbury has gotten into the groove with his style of balanced, multiple and versatile offense. Should he win the NFC West and put Arizona right there with Green Bay and Tampa Bay as a Super Bowl contender in 2021, the 42-year old former Belichick draft pick and Texas Techer can think about growing old in his fancy new house.

From San Diego to Stanford to San Francisco to Ann Arbor, Harbaugh can flat-out coach. The former gritty starting quarterback in the NFL is highly football intelligent and calculated. He’s organized and relates well to his players, from stars to role guys. HIs steady work with his alma mater Michigan may lead some NFL teams (ahem, Bears) to try to convince him to come back.

Meyer may have owned Harbaugh’s Michigan teams in colllege, but Harbaugh is the polar opposite with his ability to coach pros as well as collegians. There’s something fitting about Meyer crashing and burning in the NFL at the same time Harbs figures out Urb’s former Buckeyes.