The New England Patriots announced Tuesday that former defensive lineman Vince Wilfork has been named to the Patriots Hall of Fame.

“It’s my pleasure to announce Vince Wilfork as our 2022 Patriots Hall of Fame selection,” said Patriots chairman and CEO Robert Kraft. “For more than a decade, Vince was a dominant defender in the trenches and anchored some of the best defenses in franchise history. His contributions on the field propelled the Patriots to four Super Bowl appearances during his 11-year career. He was a big man with an even bigger personality and a huge heart. He quickly became a fan favorite in New England. I look forward to presenting him his Patriots Hall of Fame jacket.”

Originally drafted by New England in the first round of the 2004 NFL Draft out of Miami, Wilfork was part of two Super Bowl-winning Patriots teams (XXXIX, XLIX). He holds the distinction of being one of only two players to have been with the Patriots for both Super Bowl wins 10 years apart, with the other player being quarterback Tom Brady.

Wilfork spent 11 of his 13 seasons in New England, and in that span made five Pro Bowls, was named first-team All-Pro once, played in 21 playoff games and four Super Bowls, and helped the Patriots defense finish in the top 10 in points allowed eight times. Wilfork spent the final two seasons of his career with the Houston Texans before retiring in 2017.

New England is the only NFL team which makes its Hall of Fame selections via a vote by the fans. A panel of media, alumni and staff nominate players or head coaches and vote on the top three nominees, and then allow the Patriots faithful to make the final decision on which of the nominees deserves to be enshrined into the franchise’s highest honor.

The Patriots held their annual nomination committee meeting last month, and the finalists were offensive lineman Logan Mankins, linebacker Mike Vrabel and Wilfork. All three played a key role in the 2007 Patriots squad, which recorded the only 16-0 regular season in NFL history. 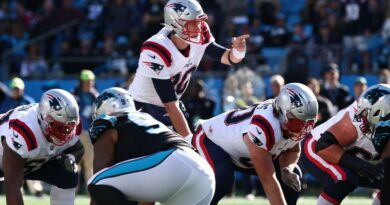