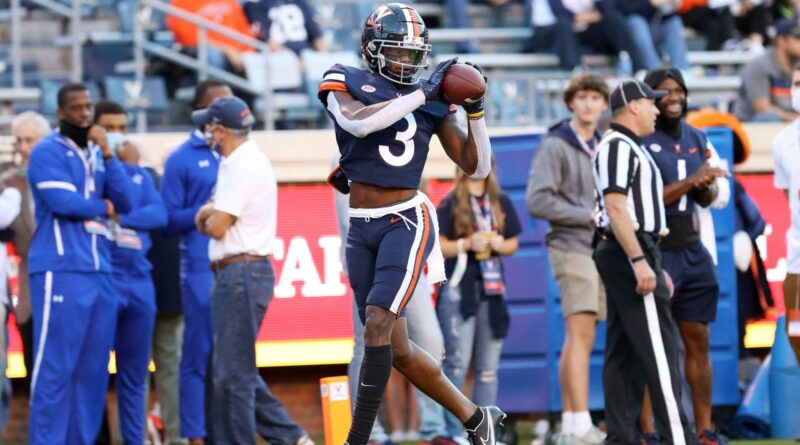 Virginia wide receiver Dontayvion Wicks may have made the catch of the year Thursday night.

Wicks ended up with the ball in the end zone to secure what turned out to be a critical touchdown for the Cavaliers after Miami cornerback Marcus Clarke dropped a potential interception. Once the ball left Clarke’s hands, it rolled off Wicks’ back and bounced off his arm into the air.

As he finally caught sight of the ball still that was somehow still in play, Wicks swooped in with one arm for the score with just under six minutes remaining in the third quarter to extend their lead 27-14.

Miami had a final chance for redemption, but couldn’t follow through. Hurricanes kicker Andre Borregales attempted a field goal as the clock ran out, but launched it too far left, allowing the Cavaliers to hold on for a 30-28 win.

Before making the catch, Wicks didn’t record a reception in the game. The receiver ended the matchup with two receptions for 75 yards and a touchdown. Since Virginia shut out William and Mary 43-0 to open their season, Wicks has scored at least one touchdown per game. The shocking catch sparked a series of dumbfounded reactions across social media. Even Robert Griffin III weighed in on his surprise.

“SportsCenter” added to the conversation by sharing the replays with commentary and analyzed that some touchdowns are, in fact, impossible to explain.

Wicks has totaled 535 receiving yards with five touchdowns through five games this season. Virginia is slated to travel to Louisville to face the Cardinals on Oct. 9.

Jared Lorenzen tried to give his friends edge on prop bet during 2007 Super Bowl vs. Patriots

Barnwell: 10 players and coaches who took a step toward Super Bowl redemption