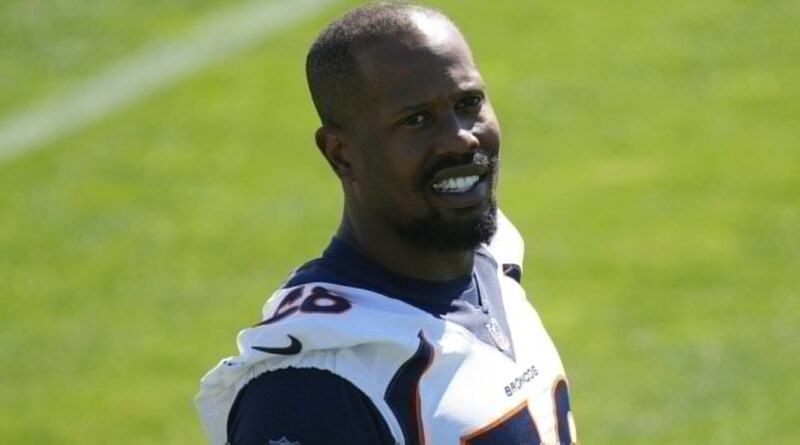 Since winning Super Bowl 50, Von Miller has watched his Denver Broncos wallow in mediocrity, finishing third or fourth in the AFC West four out of the past five seasons.

The plummet from perennial playoff contender to AFC afterthought has frustrated Broncos fans as the club heads into Vic Fangio’s third season. Injuries have played a key role in the struggles, including wiping out Miller’s entire 2020 campaign, but the pressure is on Denver to turn it around, or another restart might be in order in 2022.

Speaking to Mike Klis of 9News ahead of Sunday’s MLB Celebrity All-Star Game at Coors Field, Miller boasted about the Broncos’ current roster.

“This is the best team we’ve been able to field in a long time,” the 32-year-old said. “The offense is going to be ridiculous. We’ve got Courtland (Sutton), Jerry Jeudy﻿, Noah Fant﻿, Albert (Okwuegbunam) — I don’t want to go through the whole thing — Melvin Gordon and all these other big-time guys. The defense is just as stacked.

“A lot of guys are motivated. Everybody’s tired of losing. Everybody wants to win and I’m excited. Not being able to go to the playoffs the last five years, everybody’s feeling it at Dove Valley. From John Elway to G.P. (George Paton), the chefs and cooks, everybody involved. We should be highly motivated to go out here and play some good football this whole season.”

Assuming Miller is healthy — he told Klis his ankle is at “94 percent” — the Broncos defense should return to form up front and could boast one of the best secondaries in the NFL with stud safety Justin Simmons and first-round corner Patrick Surtain II﻿.

The biggest cloud hanging over a sunny Denver roster is the quarterback. Unfortunately, it’s also the most vital position in sports. That question mark makes analyzing the rest of the roster and predicting a great outcome hazy at best.

Drew Lock and Teddy Bridgewater are slated to battle for the starting gig. Each QB comes with his own set of questions.

The uncertainty at QB has led to rampant speculation about the Broncos making a huge swing to trade for disgruntled Green Bay signal-caller Aaron Rodgers — despite the Packers brass insisting at every turn they had zero desire to trade the reigning MVP.

“John Elway, he’s done a great job of working the big-time guys before — Peyton (Manning) and DeMarcus (Ware) and Aqib (Talib) — all these other guys. So if there’s a guy to be had, G.P. and John Elway are the two to put on it, if it can be done. If it can’t, I’m comfortable with Drew Lock and Teddy Bridgewater. They’ve impressed the hell out of me, and impressed the hell out of everybody during OTAs.

“So I’m super excited for those guys. Another year for Drew Lock, I think this will be the time for him to turn it on. So either way we go, it’s looking bright for us.”

The niceties added in regarding Lock and Bridgewater will do nothing to slow the speculation about Rodgers, at least until the QB reports to Packers training camp and we move toward the 2021 season.