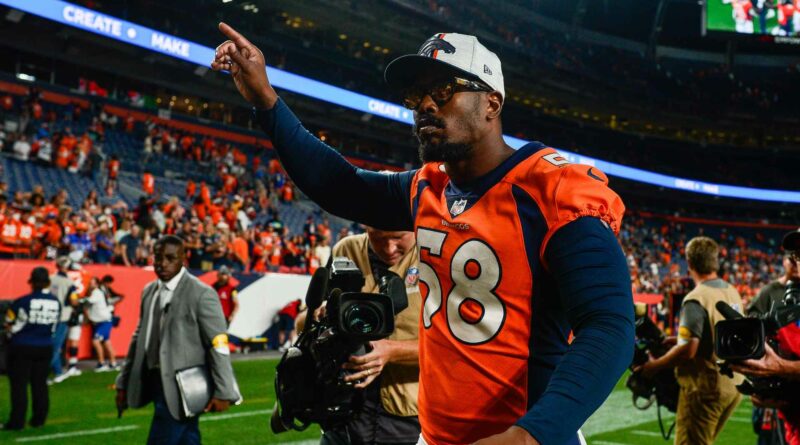 Former Broncos linebacker Von Miller quickly got emotional Monday as he offered his reaction to being traded to the Rams.

As the eight-time Pro-Bowler approached the Denver airport for Los Angeles on Monday, Miller spoke to local reporter Troy Renck from his car.

“I’ve been here through the ups and the downs,” Miller shakily told Renck. “It’s always tough whenever you leave, but I love all my fans and I love Broncos country. When I said ‘Broncos for life,’ I meant that. They’ll always be in my heart.”

The 32-year-old linebacker was acquired by the Rams in exchange for two second-day 2022 draft picks on Monday morning, Adam Schefter reported. Miller was first drafted by the Denver franchise in 2011 and has been with the Broncos for his entire NFL career.

Miller has 19 tackles, nine quarterback hits and 4.5 sacks through seven matchups with the Broncos this season. He suffered an ankle sprain during the 17-14 loss to the Browns that kept him on the sideline for the Week 8 loss to the Washington Football Team.

In addition to discussing the emotions of parting with his former teammates and coaching staff, Miller added that he expects to play for the Rams as they are scheduled to host the Titans for their Week 9 matchup.

If Miller can make his debut with Los Angeles against Tennesee, the Rams can potentially extend pick up their eighth win of the season. Los Angeles is scheduled to host the Titans at 1 p.m. Sunday at SoFi Stadium.