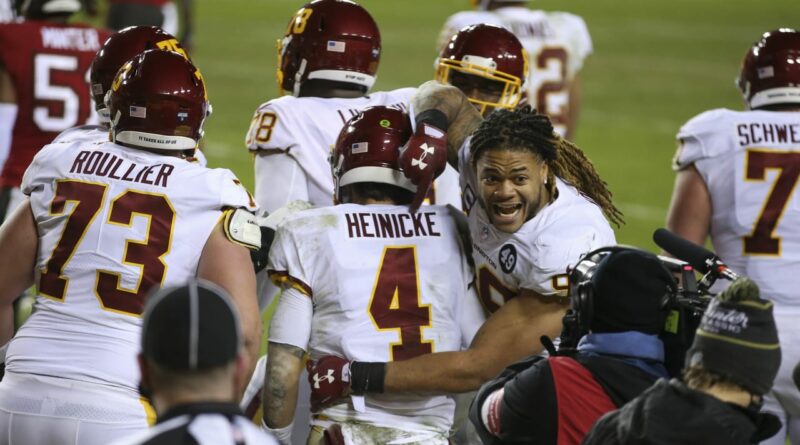 Prior to Saturday night, ﻿Taylor Heinicke﻿ was best known for his exploits at Old Dominion and his ability to celebrate an XFL win.

That’s no longer the case.

Heinicke gave a valiant effort on Saturday night in a 31-23 wild-card loss to Tampa Bay, completing 26-of-44 passes for 306 yards, one touchdown and one interception, and engineering a surprisingly efficient Washington offense in the second half of what finished as a one-score game.

“He took advantage of [the opportunity], did a great job for us,” Washington coach Ron Rivera said. “We were really fired up about giving him his opportunity today.”

Without Heinicke, it’s fair to wonder if Washington would’ve had anything more than a puncher’s chance against Tampa Bay. Washington’s usually stout defense struggled to get after ﻿Tom Brady﻿ and forced a total of just three punts on 12 possessions, giving up 31 points in a game that ended up being a higher-scoring affair than anticipated. That left Heinicke as the face of Washington’s best chance of victory, and he put together a performance Rivera called “courageous.”

Heinicke delivered beyond expectation, leading two second-half touchdown drives and another that ended in a field goal to keep Washington in striking distance to the very end. It wasn’t until Tampa Bay dialed up pressure late that Heinicke ran into struggles, overcoming an early interception to put together a game that had those watching lighting up Twitter with reactions of inspiration and amazement.

Heinicke was calm under pressure, surveying the field and hitting targets at a variety of depth and locations. Washington’s offense went from a sleepy unit to one with potential to go down the field and score at any time, all thanks to the composure and delivery of Heinicke.

“He made a lot of plays. He had a lot of poise,” Buccaneers coach Bruce Arians said of Heinicke following the game.

Heinicke’s best play came not from his arm, but his legs, when he escaped a collapsing pocket, rolled left and sprinted toward the front pylon, diving and reaching a full extension while reaching the ball out for the foam plane indicator. Heinicke hit the pylon with the ball, crossing the goal line for a touchdown that had teammate ﻿Chase Young﻿ pointing at Heinicke’s nameplate and gesturing toward the camera with a clear message: Remember this name. Following the game, Heinicke said after the dive he played through a separated AC joint that later saw him briefly exit the game after taking a hit, but returning on the ensuing offensive drive.

“They respect guys that go out there and play hard and give it their all,” Rivera said. “It’s easy to get behind a guy like that. And that’s really what happened, those guys got behind Taylor. They rallied around him and they competed their ass off. They really did. I’m really proud of this group of men.”

Heinicke’s future didn’t appear to be in football following the abrupt folding of the XFL, but when Washington was in need, it called upon Heinicke. The former Old Dominion and St. Louis BattleHawks passer delivered, potentially creating new opportunities for himself somewhere in the NFL.

His next destination remains to be determined, but for one night, he was Washington’s quarterback, and a playoff starter. And Heinicke delivered, even in defeat.

What channel is Notre Dame vs. Clemson on today? Time, TV schedule for 2020 ACC championship game

Opinion: QB Dwayne Haskins seems to be out of chances with the Washington Football Team