Houston had few problems Thursday evening, as the Texans (5-3) extended their lead in the AFC South and their five-game winning streak with a 42-23 win over the visiting Miami Dolphins (4-4) to kick off Week 8. Here’s what we learned:

1. Last we saw the Texans on prime-time television, they barely skated by the middling Dallas Cowboys and played gun-shy at the goal line, generally unable to cash in on their scoring opportunities. That was not at all the case on Thursday night. Paced by a brilliant night from Deshaun Watson, Houston smashed the visiting Dolphins with a 28-point second half. Watson threw more touchdowns (5) than incompletions (4), the first time the Texans signal-caller has thrown five TDs in a victory. DeAndre Hopkins and Will Fuller roamed free in Miami’s secondary in the second half, combining for 206 receiving yards and three scores before Fuller exited with a knee injury. Even Lamar Miller — in a revenge game no less — ran through a crumbling Dolphins front seven for 133 yards, his second-consecutive 100-yard game.

Those stats are all well and good, but the most important number from Thursday evening: Zero. Zero sacks of Watson, who came into Thursday with bruised lungs and as the most frequently sacked quarterback in the league. It’s all coming together for Houston, who have won five in a row for the first time since 2012 and now lead the AFC South by two games in the win column.

Around The NFL will have more on Houston’s victory shortly.

LSU, Les Miles agree to a buyout settlement, opening the door to coaching possibilities in 2019 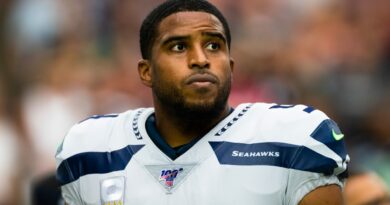 Bobby Wagner joined Rams to 'be close to home,' where playing Seahawks will be 'cherry on top'

Bills let another player wear O.J. Simpson’s No. 32 for first time in 42 years