Week 10 of the college football season is in the books, meaning there are just four weeks left until the College Football Playoff pairings are announced.

There were a few shakeups on statement Saturday, but only one team ranked in the top 10 in the AP Top 25 lost. There is still strength at the top with four unbeaten teams and six Power 5 teams with one loss.

We’re inching closer to Dec. 2 — when the final pairings are announced — and that will be here before you know it. With that mind, here are the four teams in, the first two out and four to watch heading into Week 11:

Are you not entertained? The Crimson Tide traveled to Tiger Stadium and left with a 29-0 victory — the largest road victory against LSU under Nick Saban. Alabama, which locked up a spot in the SEC championship, is playing at another level — but the challenge now is to avoid an upset shot from a Mississippi State team that took the Crimson Tide to the limit last season. Tua Tagovailoa continues his march to the Heisman.

Clemson, led by running back Travis Etienne, averaged 15.1 yards rushing per attempt by halftime against Louisville. The Tigers had a 35-3 lead at that point and finished off the Cards with 492 rushing yards in a 77-16 blowout. Clemson has won its last four games by a combined score of 240-36, and the Tigers can all but wrap up the ACC Atlantic championship with a victory at Boston College next week. Dabo Swinney has this team trending toward a fourth straight conference championship. Clemson has to have this one to get there.

After a shaky start, Ian Book led the Irish to 24 second-half points in a 31-21 victory against Northwestern. Book added 56 yards rushing, and the defense held late for another big road win that propels Notre Dame in to the final quarter of the season. The home finale against Florida State will evoke memories of 1993. The Irish must avoid the upset.

The Wolverines made their statement with a 42-7 drubbing of Penn State, which — barring a complete three-game collapse — means Jim Harbaugh won’t finish third or lower in the Big Ten East this year. Now, Michigan has a legitimate chance at its first Big Ten championship since 2004, but the Wolverines must stay focused against Rutgers and Indiana before the regular-season finale at Ohio State. Michigan has the best defense in the nation. That much we’ve learned.

The Bulldogs clinched the SEC East for the second straight year with a methodical 34-17 dismissal of Kentucky. Georgia is back on schedule, and the tag-team backfield of D’Andre Swift and Elijah Holyfield continues to improve. Georgia closes the regular season with home games against Auburn, UMass and Georgia Tech — and all of those games are at home.

The Sooners survived another shootout in a 51-46 victory against Texas Tech. Oklahoma’s offense is ridiculous — the Sooners put up 360 passing yards and 323 rushing yards — and Kyler Murray continues to make his push for the Heisman. But there are still season-long questions about the defense. Oklahoma remains the best bet out of the Big 12.

HOOVER: West Virginia has Big 12 destiny in front of it

Ohio State (8-1) didn’t allow as many big plays on defense, ran the ball more effectively and improved in the red zone against Nebraska, but the Buckeyes still held on for a 36-31 victory. That won’t help the perception battle with the committee, but it’s still a victory. The Buckeyes travel to Michigan State, the biggest road test left on the schedule. … UCF (8-0) stayed unbeaten and extended its win streak to 21 games in a 52-40 victory against Temple on Thursday, but the Knights allowed 670 yards in the victory. The Knights should climb into the top 10 in the Playoff rankings. UCF still isn’t close enough to the Playoff conversation, but more wins should help. … West Virginia (7-1) pulled out a 42-41 victory at Texas and appears to be a good bet to reach the Big 12 championship game. Can the Mountaineers beat the Sooners twice? …  Washington State (8-1) survived yet another must-win game in the Pac-12 North with a 19-13 last-minute victory against Cal, and that keeps the conference’s Playoff hopes alive. The three-game stretch against Oregon, Stanford and Cal is impressive, but the Cougars can’t have a letdown at Colorado. 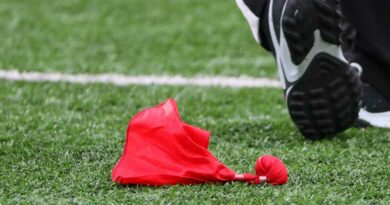 How many challenges are allowed in the NFL? Explaining the rules for reviewing a call by referees