With Patrick Mahomes and Kyler Murray on a bye, many fantasy owners will surely be looking to find a sleeper QB. Yes, Mahomes has been underwhelming, but you have likely continued to start him. Murray, along with DeAndre Hopkins, has been out for a few weeks, and you’ll have to continue to find one-week solutions for them. As always, we’re here to help you identify under-the-radar values specific to this week. Whether it’s with players on your roster or those sitting on the waiver wire, there are always guys, such as Dontrell Hilliard or Ty Johnson, with sneaky upside ready to enter your lineups and be on our Week 12 fantasy sleeper list.

It’s worth noting that any of our selections could bust this week, but so could bona fide studs. We’re taking some chances here, as we don’t want to say anyone too obvious. A list of easy choices wouldn’t do anyone any good. You aren’t going to start the guys below over consistent, proven producers, but you’re probably not searching for fantasy sleepers if your lineup is set. However, even if that’s the case, our sleepers list can help you find value in DFS contests, as the prices of these players should be affordable.

Our Week 11 selections were hit or miss, as AJ Dillon, Myles Gaskin, Brandon Aiyuk, Pat Freiermuth, Kadarius Toney (in PPR), and the Browns defense held up their end of the bargain. On the flip side, Daniel Jones, D’Onta Foreman, Cole Kmet, and C.J. Uzomah let us down. Jamal Agnew and Justin Fields suffered injuries, and Mac Jones was good in terms of real-life football, but a conservative game script held him down in fantasy leagues.

We’ve had better weeks and we’ve had worse weeks, but we’re guaranteeing our Week 12 list will be our best one yet (not a guarantee).

Devonta Freeman, Ravens vs. Browns (Jackson Sparks). Freeman appears to be the featured back in this Ravens’ offense, and even though Cleveland is a middle-of-the-pack defense against fantasy RBs, Freeman gets enough valuable opportunities through the air and at the goal line to make him a solid flex option. Chances are, you picked him up off waivers, and it’s hard to imagine there are a ton of better options at flex.

Ty Johnson, Jets @ Texans (Vinnie Iyer). It sounds like beanie, baby as the tie goes to him in their backfield over Tevin Coleman while the Jets replace rookie Michael Carter for a while.

Dontrell Hilliard, Titans @ Patriots (Matt Lutovsky). Hilliard could be a nice PPR sleeper, especially if Jeremy McNichols (concussion) is out again. Hilliard caught eight-of-10 targets last week and added another seven rushes. With Adrian Peterson gone, Hilliard could be in line for a bigger workload even if McNichols plays. The Pats are a tough run defense, but they allow the third-most receptions to RBs, so Hilliard still has flex potential.

Mac Jones, Patriots vs. Titans (Sparks). Jones is efficient, but that doesn’t always equal big fantasy numbers (as we saw in Week 11 against Atlanta). However, we’re going back to the well. The Titans can make this a competitive game and force Jones to be aggressive. After all, Tennessee is strong against fantasy RBs but the fourth-worst defense against fantasy QBs. It’s not hard to believe Bill Belichick and Josh McDaniels will know how to exploit the struggling secondary of the Titans.

Jimmy Garoppolo, 49ers vs. Vikings (Iyer).  It feels good, baby, to see the 49ers’ offense balling out again with Jimmy G at the controls and all their playmakers doing their thing. Warp speed ahead for a highly logical shootout with Captain Kirk.

Cam Newton, Panthers @ Dolphins (Lutovsky). Newton looked good last week as a runner and passer, and with another week to get more comfortable in the Panthers offense, he could be even better. The matchup isn’t quite as favorable, but Miami is still allowing the third-most fantasy points per game (FPPG) to QBs, so Newton is a high-floor, high-ceiling play.

Cedrick Wilson, Cowboys vs. Raiders (Sparks). The Raiders are actually a pretty strong defense against fantasy WRs, but since Amari Cooper (reserve/COVID) and CeeDee Lamb (concussion) are almost certainly going to be out, Wilson becomes the No. 2 WR in one of the best offenses in football. We’ve seen him produce in this spot this year already, and this is his greatest opportunity to show out on Thanksgiving.

Marvin Jones, Jaguars vs. Falcons (Iyer). Remember him? He kind of returned to relevance last week and they might actually throw to him a ton again with Trevor Lawrence now that Jamal Agnew is down for the season.

Laviska Shenault, Jaguars vs. Falcons (Lutovsky). ;With Jamal Agnew (hip) injured, Shenault will see more targets and touches. He didn’t do much with them earlier in the year, but against an Atlanta defense allowing the seventh-most FPPG to WRs, we should finally get that breakout game we’ve been waiting for.

Evan Engram, Giants vs. Eagles (Sparks). Heading into Week 11, the Eagles were the worst defense against fantasy tight ends, and they’re coming off a game in which Adam Trautman caught five passes for 58 yards and a touchdown against them. Engram has multiple starting-caliber weeks on his resume this season, and he could smash in this contest.

Gerald Everett, Seahawks @ Washington (Iyer). He’s been getting more involved, so desperate deep leaguers who have Travis Kelce on a bye could do worse than this dart throw with upside like Everett.

Austin Hooper, Browns @ Ravens (Lutovsky). Hooper has had four catches in three of the past four games, establishing a decent floor in PPR leagues. The Ravens did a good job against Cole Kmet last week, but they’re still in the top 10 for FPPG allowed to TEs.

Los Angeles Chargers @ Broncos (Iyer). Teddy Bridgewater is about to get pushed around and make some big mistakes at home.

Cincinnati Bengals vs. Steelers (Lutovsky). The Steelers have offensive line issues, and Cincinnati’s pass rush has been consistent all year, generating multiple sacks in all but two games. When these teams met in September, the Bengals defense sacked Ben Roethlisberger four times and forced two INTs while limiting Pittsburgh to 10 offensive points. A similar game could be in order. 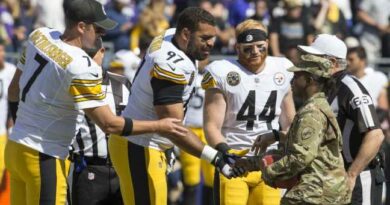 Heyward sick of everyone bashing Roethlisberger