Week 17 of the NFL season is the ultimate challenge for handicappers as they must account for injuries, some teams resting starters and others looking to audition young players for next season. Before figuring out what best bets to make for the 16 NFL games on Sunday, you’ll definitely want to get some expert help. And there’s nobody better to listen to than legendary Vegas handicapper Hammerin’ Hank Goldberg. Renowned for his decades of experience picking games and cultivating league sources, Hammer only had two losing seasons in almost two decades of picking NFL games for ESPN. And in 2017, he competed against 10 top handicappers in the Las Vegas Review-Journal’s NFL Challenge and beat them all, finishing 50-29-6 against the spread. Now you can get his strongest NFL picks over at SportsLine.

Last week, Hammer went undefeated on his best bets, cashing with the Vikings (-5.5) and Bears (-4) and taking a push with Dallas (-7) when Tampa Bay scored a garbage-time touchdown. In Week 14, Goldberg swept his best bets, and anyone who parlayed them was rewarded with a sweet 6-1 payout.

This week, Hammer has found a trio of NFL picks he loves. If you parlay them, you’d be looking at another 6-1 payout. We can tell you he’s high on Chicago (+4) as the Bears look to stay alive for a chance at a bye in the NFC playoffs. And while he likes the Bears, this is more a play against the Vikings, a team he doesn’t trust in big games.

“I don’t like Kirk Cousins in big games,” Goldberg told SportsLine. “The Bears still have a chance to get the No. 2 seed so they’re going to show up. Chicago will generate turnovers as it always does. Grab the points.”

The Vikings are 2-8 against the spread in their last 10 games against winning teams. They have a lot on the line, but Chicago has enough at stake to keep starters in for most, if not all, this game. Confidently lock in a pick for Chicago with the points as a key part of this top Week 17 NFL parlay.

Hammer has also identified another underdog in an ideal spot to pull off an upset on Sunday. The line on that game is way off, Goldberg says, so it’s a must-play for any NFL parlay.

So what are the three best bets Hammer is confident will return a huge 6-1 payout in Week 17? Visit SportsLine now to see which surging team will fall flat on its face, and see which spread is way off, all from the legendary handicapper who keeps crushing sportsbooks with his NFL picks. 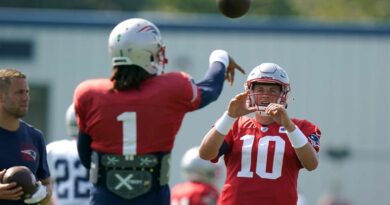