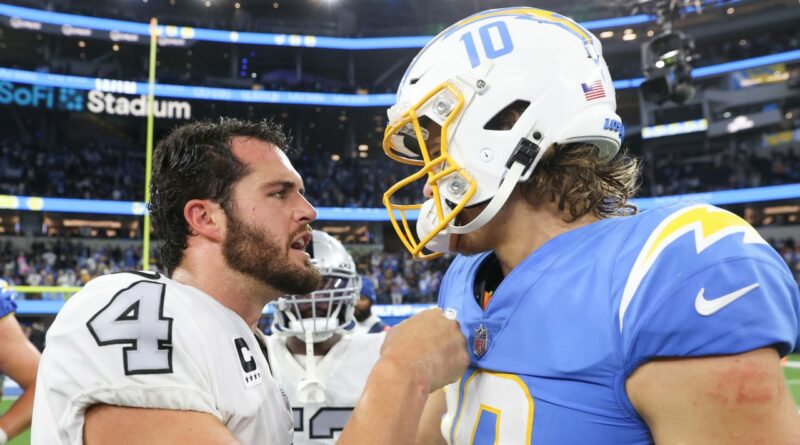 The lines below provided by Caesars are current as of Noon ET on Thursday, Jan. 6 unless otherwise noted below.

Vic Fangio had to wait until age 60 to get his first head-coaching opportunity. It’s a shame that his three-year tenure, marked by what ifs, will likely end against a Chiefs problem his defense was unable to solve. Fangio has never won against Andy Reid, and Patrick Mahomes has never lost to the Broncos, dating back to the Vance Joseph days. The timing is off here, too: For the first time all season, it’s easy to see that Mahomes and this Chiefs’ offense are back in full flow.

Like a lot of games this week, this prediction is largely about who wants to win. Even before the Eagles opened the week by putting a dozen players on the COVID-19 list, including many starters, I was operating under the assumption they would rest their starters. And while they have one of the best backup quarterbacks in Gardner Minshew, my other assumption is that the Cowboys will want to wipe the stink of their recent offensive showings and give themselves a chance at more home playoff games.

Can Jordan Love and the Packers’ backups beat the Lions? How long does Aaron Rodgers need to play to ensure a victory? These are the weird questions that Week 18 asks. Green Bay’s rush defense could struggle with Detroit’s ground game, even if the Pack play all out. Matt LaFleur spoke about two weeks off possibly being too much, which is different than the “we’ll see” answers Cincinnati’s Zac Taylor and Philadelphia’s Nick Sirianni revealingly gave. I’ve backed the Lions all year, and yet I could see LaFleur playing Rodgers until halftime or later, long enough to secure a big lead.

Everyone is trotting out the stat that the Jaguars have won six straight home games against the Colts. Those wins came under Doug Marrone and Gus Bradley. This Jacksonville team, however, had possibly its most complete game of the season in a 23-17 loss at Indianapolis back in Week 10. A Colts punt-block touchdown was the difference in a game that was otherwise even. Carson Wentz played poorly that day and the Colts’ offense was a punt machine, so you never know. But you probably know.

Washington should be so happy to see the Giants on the schedule, a chance to finish a mostly cursed season with a reminder that things could always be worse.

Kirk Cousins is back. And with Justin Fields hitting the reserve/COVID-19 list on Thursday, Andy Dalton’s in line to make another start. Minnesota has a dead team walking vibe that makes an ugly end possible, but its ceiling is so much higher than Chicago’s on both sides of the ball. Just look at the teams’ first matchup last month — perhaps the worst prime-time game of the season — and how the Vikings won despite their offense being at its poorest.

The Texans beat the Titans convincingly when Tennessee’s roster was at a low point in availability. While the Texans have improved since then, too, the Titans are treating Sunday like a playoff game. It’s simple: Beat the brakes off Houston and automatically advance to the Divisional Round as the AFC’s No. 1 seed. The Texans’ defense could keep it low scoring for a while, but Tennessee’s “big men will push you around” approach on both lines should be plenty.

It felt like the Steelers won their playoff game Monday night. Now they turn around to face a decimated, feisty Ravens team that still has faint postseason hopes, too. Unlike Cleveland, Baltimore will remember to test Pittsburgh’s run defense. Moral victories for everyone in the AFC North! (Except the Browns.)

Tricky one. The Browns opened as favorites because Vegas priced in the Bengals possibly not playing their starters. Cincinnati weirdly flipped to becoming the favorite early in the week when a lot of people mistakenly believed Joe Burrow was in line to play. With Burrow poised to get rest, most of the best Bengals players are probably in the same boat. Case Keenum is an upgrade on Baker Mayfield, and the Bengals will likely know by kickoff they can’t nab the No. 1 seed.

This point spread cares not for the Rams’ five-game losing streak to the 49ers, which I find a lot more instructive than most historical stats. The coaches haven’t changed. The general strengths and weaknesses haven’t changed. The Rams have struggled with the 49ers’ size for years, and the possibility of Trey Lance starting will only help San Francisco’s running game. Then again, Matthew Stafford was only around for one of these games, the Rams’ defense is quietly peaking and this game is for the division title on L.A.’s side. I like the Niners to cover more than I like either team to win, but this Rams squad has proven resourceful in the fourth quarter lately.

The Bucs could finish anywhere from the No. 2 to the No. 4 seed. Considering their 6-1 home record and offensive style, they may just play Tom Brady for the chance for an extra home playoff game. It also may not take four quarters to build up a big lead against the Panthers. Brady and Bruce Arians have beaten Matt Rhule’s Panthers three times by an average of 21 points over the last two years, including 32-6 two weeks ago. Check back later in the week on this one.

My friend Cynthia Frelund’s model has loved the Cardinals all season, and with good reason. Vegas has mostly followed suit, but 6.5 points still sounds way too rich with all the injury questions facing this Arizona squad. Colt McCoy helped take apart this Seahawks defense during the Cards’ 10-point win back in Week 11, but that was before Rashaad Penny turned into Derrick Henry.

It’s not that I don’t believe in what the Dolphins accomplished during their winning streak. Tua Tagovailoa will play better in better conditions this week, and the Miami defense won’t give up much through the air. It’s just that the Patriots’ ceiling is so much higher offensively. They can run on the Dolphins and are more likely to win the turnover margin, like they have all year.

Taysom Hill is playing a bit better each week. This Saints defense, probably the best of the Sean Payton era, smells blood in the water against lackluster offenses. The Falcons qualify, especially if Kyle Pitts is out. New Orleans’ pass rush is a lot more fearsome than it was in the first meeting between these teams back in Week 9.

I’m foolish enough to believe the Jets have found something in their running game over the last month and that it matches up well with the Bills. I’m also foolish enough to believe Zach Wilson’s growing confidence and improved play mean something, even in a tough matchup. New York could make Buffalo sweat out this potential AFC East title clincher, even if Robert Saleh’s crew falls short.

Well of course the Chargers are favored by three in this game because that’s unquestionably the exact right line. This is a stay-away if there ever was one, a time to enjoy a playoff game one week early between two star-crossed division rivals. I’m picking the Bolts because they are the better overall team with the better quarterback, but that feels overly logical. Derek Carr and this Raiders squad have spun fourth-quarter magic lately, and the Chargers’ improved O-line is hurt at the wrong time, so I don’t feel confident about anything here except that it should be a lot of fun.