Home » NFL » What channel is 49ers vs. Packers on today? Schedule, time for ‘Sunday Night Football’ in Week 3 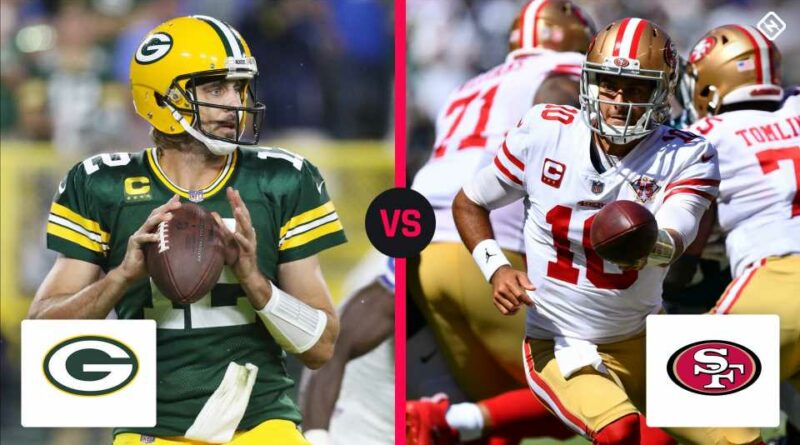 After a dismal Week 1, Aaron Rodgers and the Packers bounced back in resounding fashion against the Lions.

Rodgers completed 22-of-27 passes for 255 yards with four touchdowns; Davante Adams caught eight passes for 121 yards; Aaron Jones rushed 17 times for 67 yards and a touchdown with 48 receiving yards on six catches, three of which went for scores.

Fans that missed that performance won’t have to wait long to see the encore on national television. The Packers will face the 2-0 49ers on “Sunday Night Football” in Santa Clara.

The 49ers have leaned on their rushing attack early this season for production, with Elijah Mitchell having carried the bulk of the workload with 36 carries for 146 yards with a touchdown. Raheem Mostert is out for the season with season-ending knee injury and Trey Sermon has dealt with injuries early in the campaign.

Jimmy Garappolo has been effective to start off the season, if unspectacular, as he has completed 70.9 percent of his passes for 503 yards with two touchdowns and no interceptions.

What channel is 49ers vs. Packers on today?

NBC will carry the matchup between the Packers and 49ers on Sunday Night Football. Al Michaels will be on play-by-play with Cris Collinsworth providing analysis. Michele Tafoya will be reporting from the sidelines.

Coverage of this broadcast will be on NBC, with the option to stream from either the ESPN app or on fuboTV, which offers a 7-day free trial.

The 49ers and Packers are expected to kickoff their matchup at 8:20 p.m. ET from Levi Stadium in Santa Clara, California.

WEEK 3 NFL PICKS: Straight up | Against the spread

Because NBC broadcasts all “Sunday Night Football” games, they are available to stream on all of the network’s online platforms. This includes Peacock, the network’s relatively new streaming service. This should be the preferred method for those who have a cable/satellite subscription but can’t get in front of a TV.

College Football Playoff rankings: Who are the top four teams in the fourth CFP poll of 2020?