At no point during the 2021 NFL season did it seem like we were in danger of having any games postponed to Tuesday night. Then Week 15 rolled around, and things changed.

The NFL had a major COVID outbreak before Week 15 that saw three teams put at least 20 players on the COVID list. That necessitated moving the three games involving those teams — the Browns, Seahawks and Washington — to ensure that the spread between players in those locker rooms had been stopped.

As such, the two games scheduled for Sunday afternoon shifted two days into the future. Thus, Tuesday night football got a chance to live again.

What NFL games are on tonight?

Below is the full schedule for an exceedingly rare NFL Tuesday slate in Week 15.

What time are the Tuesday NFL games on?

Here’s how to watch each of the Tuesday NFL games in Week 15.

The Seahawks (5-8) are looking to keep their playoff hopes alive as they travel to Los Angeles to take on the Rams. Seattle has won back-to-back games after beginning the season 3-8 and is still clinging to the hope that they can make a late push for one of the final two Wild Card spots in the NFC.

Russell Wilson is finally healthy after missing three games with a finger injury and performing at a subpar level in a handful more after pushing for an early return from that injury. He has a couple of strong receivers in DK Metcalf and Tyler Lockett, though he will have to hope that Lockett can be activated from the COVID list before Tuesday night as they face the Rams.

Los Angeles is coming off a huge win over the Cardinals, but they are dealing with a big COVID outbreak that has sidelined the likes of Odell Beckham Jr., Tyler Higbee, Jalen Ramsey, Von Miller and more over the last week-plus. Beckham returned from the list over the weekend, but it’s unclear whether the rest will be cleared to play in Week 15.

Streamers will be able to watch this contest, which airs on Fox, by using fuboTV, which offers a 7-day free trial. Kevin Kugler and Mark Sanchez will be on the call.

Meanwhile, viewers in Canada can watch the game on DAZN.

Washington (6-7) is traveling to Philadelphia to take on the Eagles (6-7) in a game that will decide which NFC East team has the easier path to a potential Wild Card berth.

Washington has dealt with a COVID outbreak this week, and their quarterback situation is uncertain. Starter Taylor Heinicke and backup Kyle Allen were both on the list over the weekend and that means one of Garrett Gilbert, Kyle Shurmur or Jordan Ta’amu may be forced to start if Heinicke or Allen can’t return. Shurmur has been on the practice squad all season while Gilbert and Ta’amu were just signed.

On the Eagles’ side of things, the only question is about the health of Jalen Hurts. The second-year quarterback is dealing with an ankle injury that kept him out of the Eagles’ final game before their Week 14 bye. The extra two days should help him to get healthier, so that could bode well for him in this contest.

Streamers will be able to watch this game, which airs on Fox, by using fuboTV, which offers a 7-day free trial. Chris Myers and Daryl Johnston will be on the call.

Meanwhile, viewers in Canada can watch the game on DAZN.

Both of Tuesday’s games were initially set to be a part of the NFL’s Sunday afternoon slate, so they were not scheduled to be broadcast everywhere. That’s part of the reason that they are both beginning at 7 p.m. ET, as Fox isn’t supposed to get extra national broadcasts as a result of the two postponements.

As such, about half of the country will see the Seahawks-Rams game (blue) while the other half will be treated to the Washington-Eagles game (red). Here’s a breakdown of which areas will see which game.

Both the Seahawks-Rams and Washington-Eagles games were scheduled to air on Fox, so viewers will be able to live stream those contests using the Fox Sports App or FoxSports.com. This will be the easiest way for viewers with cable or satellite to view the game.

Cord-cutters also have plenty of options with which they can stream the Tuesday games and other NFL contests during the 2021 season. 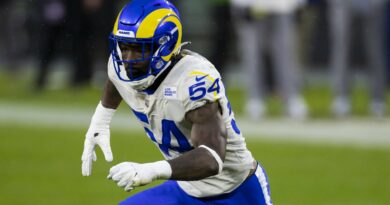