Home » NFL » What’s behind the number? 15 rookies explain why they chose their NFL uniform number 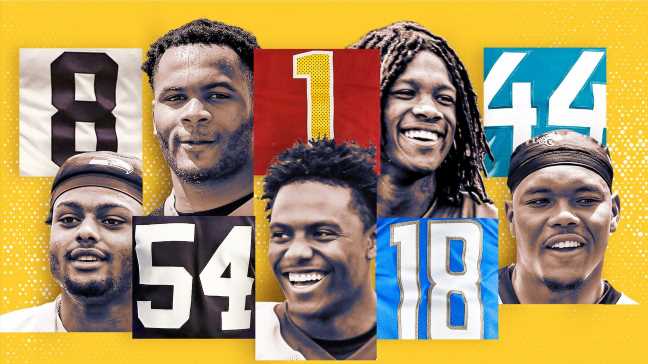 NFL players and their uniform numbers are inextricably connected. The numbers are how fans quickly recognize players on the field. They become part of each player’s persona, and fans proudly rock them when they wear an NFL jersey. Sometimes the numbers even become an iconic brand, such as Tampa Bay Buccaneers quarterback Tom Brady’s TB12.

But how does a player end up with his uniform number?

We asked 15 NFL rookies why they chose their numbers as NFL training camp gets underway. Their answers include tributes to family, paying respect to NFL heroes, making a number their own and some funny responses, such as not really knowing Troy Aikman and failed attempts to claim the number from a veteran teammate.

Here’s what’s behind the numbers:

Washington announced its new name in February and a few months later selected Dotson with the 16th overall pick. Dotson wore No. 5 at Penn State but switched to signify he was the first pick of the Commanders and as a shoutout to KJ Hamler, his college teammate of two seasons, who wears No. 1 for the Denver Broncos.

“I felt like it was the perfect opportunity; the first Commander ever drafted in history, and No. 1 has always been a cool number to me. One of my former teammates in college, KJ Hamler, wore the No. 1 and was like my big brother, my mentor, so getting the 1 was cool.” — John Keim

Essentially, it was a choice of three numbers for Ridder — 4, 13 or 16 — and he went with the single digit after wearing No. 9 at Cincinnati. He did try to get No. 9 from linebacker Lorenzo Carter — sending him a direct message after the draft asking for the number — but was quickly told no.

How fast was that shot down? It didn’t even get to the compensation portion of the conversation. Ridder said he knew there was a financial figure out there — but he didn’t even want to ask what it was.

The Seahawks’ fourth-round pick was named after Kobe Bryant, so why not wear one of the NBA legend’s numbers too?

“But then they just offered it to me,” Coby Bryant said. “So it was like it was just God’s plan from the jump. So as soon as [the team] asked me would I wear it, I said, absolutely, without a question.”

Brisker chose No. 9 to honor his late brother, Tale’, who was killed in 2015. The Bears safety wore No. 3 in high school, and 3 was also the number his brother had.

“I was just thinking 3 times 3 is 9,” Brisker said. “He always finds a way to let ’em know that he’s still here.” — Courtney Cronin

Watson was No. 82 for a couple of days, but by the time he hit the field for rookie minicamp a week after the draft, he had switched to No. 9.

“That was just kind of the jersey number that got thrown at me right away,” Watson said. “In the moment I was just excited about being drafted and I was like, ‘Yeah, let’s goooo!’ Then I thought about it and I was like, ‘Do you have any other options?’ So I just asked what the other options were and I decided on 9.”

Watson wore No. 1 at North Dakota State, but no one has worn that number in a game for the Packers since Curly Lambeau in 1926.

“I talked to a lot of people obviously, but at the end of the day, I’m the one wearing the number,” Watson said. “It’s not really about the number, but 9 was the one.” — Rob Demovsky

Tyreek Hill wore No. 10 for the Chiefs for six seasons and quickly became the most distinguished player in team history to wear the number. But the Chiefs wasted no time after trading Hill to the Miami Dolphins in issuing No. 10 to rookie running back Pacheco, a seventh-round draft pick.

“I definitely know who wore it. I don’t feel any pressure,” Pacheco said. “I’ve worn this number before, my freshman year in college, and did a great job with it. It’s not the number but the player, so I’m the guy that’s wearing it.” — Adam Teicher

Hamilton wore No. 10 in high school, but he wasn’t attached to it when he got to Notre Dame. He never knew the jersey number he received at South Bend would have so much significance going forward.

“Going into college, I wasn’t really a big jersey number guy. I got assigned No. 14 and said I’d make the number myself, and I did that,” Hamilton said. “Then I was the 14th pick in the NFL draft, and No. 14 was available in Baltimore. The stars were aligned, so it made sense.” — Jamison Hensley

Williams had a couple of options but ultimately decided on No. 18 as a nod to Motown Hall of Famer Calvin Johnson, who wore No. 81 for the Lions. So, he flipped it.

Williams wore No. 1 at Alabama, but Detroit cornerback Jeff Okudah wouldn’t give it up to the rookie despite his request.

“It was funny because Jamo went to Ohio State, and he seen me in the No. 1, so it was a hard argument to like, ‘Hey, bruh, can I get your number that you had in college?’ It was a weird conversation, but he knows it’s all love,” Okudah said, laughing. — Eric Woodyard

Tolbert wore No. 8 at South Alabama and knew pretty quickly he wouldn’t be No. 8 for the Cowboys. While the Cowboys don’t officially retire numbers, Troy Aikman’s No. 8 is off-limits, as are Roger Staubach’s No. 12 and Emmitt Smith’s No. 22. So Tolbert was handed No. 18 instead.

Since he didn’t play football until he was in high school, he said he didn’t even know who Aikman was.

“With me starting football so late, I wasn’t into the older guys,” he said. “Now that I’m in the game and learning more, I’m starting to go back to watch like Randy Moss and stuff like that, but I never honestly knew who he was ’til that happened [and I got drafted].” — Todd Archer

When Austin selected his jersey number, there weren’t many open for receivers. Austin doesn’t have a deep meaning behind choosing No. 19, and he isn’t worried about the pressure that could come from wearing former Steelers wide receiver JuJu Smith-Schuster’s old number.

“I’m sure when most Steeler fans see 19, that’s who they’re first gonna think of, and that’s to be expected,” he said. “It’s just until I come in and show what I can do, then hopefully they’ll be thinking of me when they see 19.” — Brooke Pryor

After losing out on his first choice, No. 6, to first-round safety Lewis Cine, third-rounder Asamoah chose No. 33 to continue an unusual streak. The digits of every number he has worn in football have added up to 6. He wore No. 6 in high school, No. 24 at Oklahoma and No. 33 in the NFL.

Walker grew up in Thomaston, Georgia, so he naturally watched the Falcons play on Sundays. He liked watching linebacker Vic Beasley, who wore No. 44, so that’s the number he decided to wear when he got to Upson-Lee High School.

Walker, though, caught a break. Linebacker Myles Jack had worn 44 since the Jaguars drafted him in 2016, but they cut him in March. Had they not, Walker would have had to go with another number.

“Whatever number they gave me, I would be willing to outwork somebody for whatever number I wanted in the future,” Walker said. — Michael DiRocco

Thornton didn’t choose 51; it was given to him by coach Bill Belichick as part of his annual spring tradition of assigning rookies unconventional temporary numbers as a reminder to them of what should be most important.

Thornton laughed when he first saw 51 in his locker.

Williams had visions of wearing No. 7 or No. 13 with the Cowboys.

“But he’s on offense,” Williams replied. “You can have two.”

Unlike college, however, there is no doubling up of the numbers in the NFL.

Is it a good pass-rushing number?

Johnson took up playing football his junior year of high school and went to YouTube to learn his craft. There, he found film of Cowboys training camp, and more specifically, cut-ups of All-Pro left tackle Tyron Smith.

“I don’t think he got beat once,” Johnson said about Smith’s performance against the Cowboys’ pass rush. “He was just awesome.”

So, simple as that, Johnson decided that’s whose number he’d like to wear going forward. The rookie will have a chance to meet Smith when the Chargers and Cowboys hold joint training camp practice. — Lindsey Thiry