Home » NFL » Which longshot College Football Playoff scenarios are most likely to happen this season? 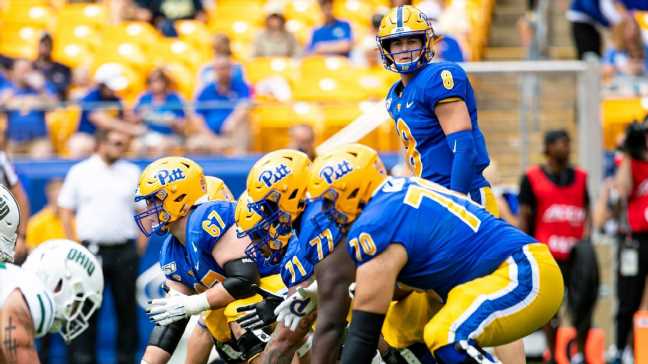 When I fired up the Allstate Playoff Predictor on Sunday morning, something was … different.

I just had sat down with my morning coffee, so the brain was only half running. My eyes glazed over Georgia and Alabama at the top. They glanced past the disappointing-but-still-contenders in Oklahoma and Ohio State. Michigan was up there; FPI loves the Wolverines right now. Cincinnati is in the mix now. But then a few spots lower — and this is where I wondered if I was just groggy — is that Pitt? Pitt?

It was no mirage. The Pitt Panthers have the 10th-best chance to reach the College Football Playoff, with a 9% shot, according to the Allstate Playoff Predictor. A long shot, yes. But real as can be, as far as the model is concerned.

Pitt isn’t even ranked in the AP poll right now. So what is going on here?

For starters, the driver of this entire thing is FPI, which is all-in on the Panthers. Pitt ranks 6th in total efficiency this season, which is opponent-adjusted. And in a way that’s underselling it, because the Panthers are 6th on offense, 10th on defense and 99th on special teams. You know which one of those is the least indicative of future performance? You guessed it, special teams. Quarterback Kenny Pickett ranks second in QBR — one spot behind Liberty’s Malik Willis and one spot ahead of Alabama’s Bryce Young.

Altogether, even with the preseason prior, FPI believes Pitt is the 10th-best team in the country going forward. Remember, this isn’t just about record but who you played and how you played them. Pitt has a narrow loss to Western Michigan, yes. But it also beat Tennessee on the road, blew out the opponents it was supposed to blowout, and then beat Georgia Tech on the road by 31 a week after the Yellow Jackets beat North Carolina, and two weeks after they only lost by 6 at Clemson.

Is it likely? No. I’m telling you it’s precisely unlikely — to the tune of 91%. But in those 9% of simulations, Pitt would be a strong contender, even if it only held the No. 10 FPI rating (and it would probably go up). The Panthers projected Strength of Record rank would be 4.5. And they would be a one-loss Power 5 conference champion, usually a safe recipe for a playoff contender. With a decent amount of chaos under our belt already — and the Predictor working under a fairly safe assumption there is more to come — Pitt would have a shot if it wins out.

Penn State only has a 12% chance to reach the playoff

Whatever the Nittany Lions are selling, FPI ain’t buying. They may be ranked No. 4 in the AP Poll now, but that’s not where our numbers expect them to finish.

Here’s the way the model sees it. Ohio State and Penn State are virtually equivalent when it comes down to efficiency — which is expected points added per play, adjusted for opponent and garbage time. Ohio State was expected to be the better team in the preseason. Penn State has to travel to Columbus later this year. Put those three things together. Why should the Nittany Lions be favored over Ohio State or Michigan (a team that has played better than either team on a play-by-play level so far) to win the Big Ten East? Per FPI, they aren’t.

Penn State faces a pretty big test this week at Iowa, which should tell us quite a bit about both teams. But even if the Nittany Lions get past the Hawkeyes, they’ll still have an uphill battle ahead.

Texas not out of playoff race just yet

Texas has an 11% chance to reach the playoff — which makes this basically the higher-profile version of the Pitt story.

Just like the Panthers, Texas has one loss. It ranks 10th in efficiency, which is worse than Pitt, but came into the season with a much stronger prior performance. So even with that loss, FPI has Texas as the eighth-best team going forward. And also like Pitt, Texas has a quarterback playing well: Casey Thompson ranks 5th in Total QBR.

In addition, that one loss to Arkansas suffered early in the year actually looks a little better now than it did then — even after a 37-0 drubbing of the Razorbacks by Georgia.

If Texas wins out, it would be a one-loss Power 5 conference champion with an (expected) top 10 FPI rank, and quite possibly two wins over Oklahoma. Their projected SOR rank would be just 2.6 — it would be hard to deny them.

I will say the even crazier thing is that the Predictor thinks there’s a chance Texas could even have a chance as a two-loss champion which is a little wild to me. But because they likely would have to play Oklahoma twice, their projected SOR rank in that scenario would only be 4.7.

Georgia and Alabama could get in as two-loss non-champions

If Georgia were to, say, lose to Florida and then again in the conference championship game, the Allstate Playoff Predictor says the Bulldogs would still have a 71% shot gaining entrance to college football’s last four. And conversely, let’s hand Alabama a loss to Texas A&M and then another in the conference championship game — and the Predictor spits out a 70% shot at the playoff.

As it currently stands, no team is within six points on a neutral field against Alabama or Georgia. So it’s hard to imagine a world where, even after a couple losses, they aren’t a top-four team.

Because the SEC is so strong and they almost certainly would play each other in these scenarios, Alabama and Georgia’s projected SOR ranks would be just 3.2 and 3.9, respectively. They could literally have a best and most deserving case even as a two-loss non-champ! It’s not a guarantee because of the number in the loss column, but the Predictor thinks the committee most likely would give either the Bulldogs or Crimson Tide the benefit of the doubt, even with two losses.