Home » NFL » Who is Bijan Robinson? Meet the Texas running back on cusp of sophomore superstardom 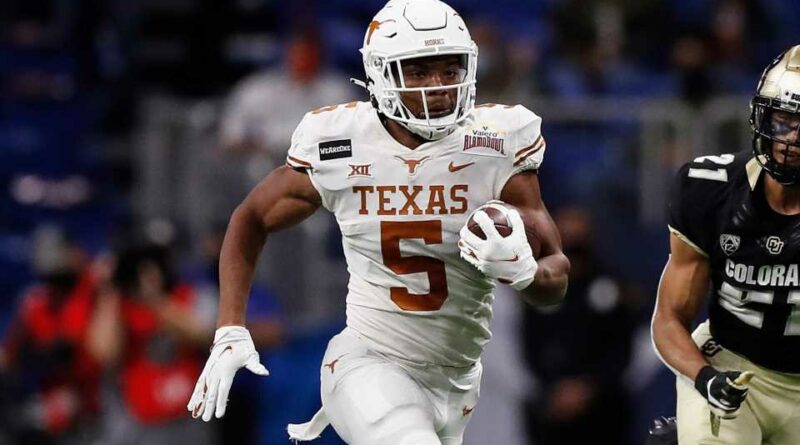 There have been plenty of star running backs to play for the Longhorns.

Could Texas already have its next great running back? The early returns on Bijan Robinson certainly seem to hint at that possibility. Robinson was a star for Texas as a freshman and came out of high school with the top recruit status already.

What do you need to know about Robinson before the start of the 2021 campaign? Sporting News has you covered.

Expectations were high for Robinson coming out of high school.

The Class of 2020 running back was listed by 247Sports as a five-star, the No. 21 overall prospect in the nation, the No. 1 running back and the No. 2 player from Arizona.

The list of accomplishments he racked up in high school are numerous. He is the state’s all-time leader with 114 touchdowns and is second all-time with 7,036 rushing yards and was the only running back in Arizona to ever rush for 2,000 yards in three straight seasons, according to Salpointe Catholic High School. His high school career ended with him being named the winner of the Ed Doherty Award, given out to the top high school football player in the state, for the second straight year, which made him the first ever player to earn the distinction twice.

One game while at Salpointe, Robinson carried the football just four times, but took it for 247 yards and three touchdowns, according to the school. Salpointe also reported that he had multiple games with at least 280 rushing yards.

Robinson certainly delivered on the hype he had in his first year with the Longhorns.

He started the final six games of the season and finished the year with a total of 86 rushes for 703 yards and four touchdowns, while adding 15 receptions for 196 yards and two touchdowns to his freshman stat line. His 915 all-purpose yards were the most on the team, making him the first Texas freshman since Benson in 2001 to lead the Longhorns in yardage. Robinson set a few school records in his debut season as well, averaging 8.2 yards per carry for the season and 19.1 yards per carry in a single game against Kansas State, both numbers the most among freshmen in the school’s history.

The campaign earned him several recognitions for his 2020 efforts. Robinson was an honorable mention as Big 12 Offensive Freshman of the Year, twice earned Big 12 Newcomer of the Week and was named the 2020 Valero Alamo Bowl Offensive MVP when against Colorado, he rushed 10 times for 183 yards and scored a touchdown. He also had 37 receiving yards on two catches, both of which were for scores.

Now a sophomore, Robinson is going to be expected to take the next step and be the offensive leader on this team, especially following the departure of Sam Ehlinger at quarterback.

Hudson Card, a four-star recruit from the 2020 class, is expected to take over at quarterback despite the presence of experienced QB Casey Thompson. A dual-threat quarterback, Card is going to be burning offenses as much with his legs as his arm, which could lead to Robinson being featured heavily as both a run-pass option threat and a dump-off threat with his ability to make an impact in the receiving game. Especially promising for Robinson and the Texas offense is that four of the five starters on the offensive line are coming back in 2021.

And after that standout freshman season, teams are going to be on notice, as is the rest of the college football world. Ahead of this year, he was named to the preseason watch lists for the Maxwell Award, Doak Walker Award and Walter Camp Football Foundation Player of the Year. He has also been placed on the preseason lists for the Sporting News All-American team, All-Big 12 first team and ESPN All-America team.