Home » NFL » Who is David Mulugheta? How 36-year-old son of Eritrean immigrants is changing trajectory for NFL agents

AUSTIN, Texas – David Mulugheta remembers his first reaction: You guys are out of your mind.

Safeties Earl Thomas and Landon Collins group-texted their agent on May 9, telling him to look outside. Mulugheta opened the front door of his home to find a gleaming, black 2019 Mercedes G Wagon parked at his curb, a bright red bow fastened to its hood.

“No way that’s yours,” Ramsey told USA TODAY Sports he responded. Mulugheta FaceTimed Ramsey to prove it. Then he wondered how one goes about sending back a car.

The scene, if not the present itself, was typical for Mulugheta and the players he represents, none of whom see the price tag as the message of this story. They instead look at the gratitude, the group texts and the knowledge that, yes, Mulugheta still stubbornly drives the Chrysler 300 he bought in college, using it to take his 3- and 5-year-old sons to jiujitsu and then to Target for red-and-blue slushies. Even having that car marks a stark shift for Mulugheta from when he was was 3 years old, buckled into the passenger seat of the taxi his father drove because his family couldn’t afford a babysitter. That was a time when the Mulughetas had “sleep for dinner.” As in, go to sleep: There is no dinner tonight. 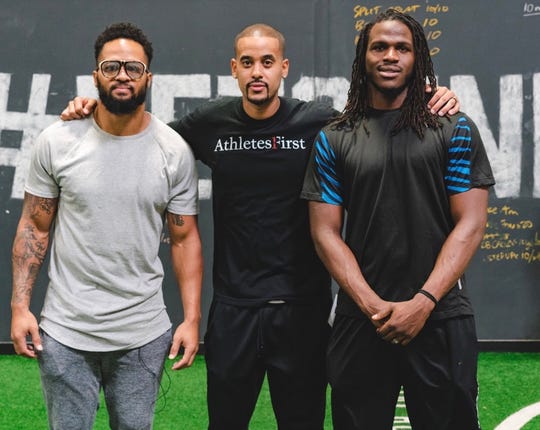 Now the 36-year-old son of Eritrean immigrants has negotiated NFL contracts for some of the league's biggest names. He has represented at least one first-round selection for seven straight years. In April, Dwayne Haskins became his second quarterback in the last three years to be drafted in the top 15 (the Texans took Deshaun Watson 12th overall in 2017).

Mulugheta, now an equity partner at Athletes First, still receives questions about whether that “young black kid” actually negotiates his players’ contracts. Record deals this spring – like Collins’ six-year, $84 million agreement with the Redskins that made him the highest-paid safety in the league and Thomas’ four-year, $55 million pact with the Ravens – quiet some of those doubts. Mulugheta is not the first black NFL agent to rise to prominence. But he’s proud that in a predominantly white industry, his example shows minorities “someone who looks like them [can] do it and do it successfully,” he said. At least one fellow black agent agrees.

“The norm is not going to work anymore,” Young Money Sports agent Nicole Lynn told USA TODAY Sports. “David came into this business wearing his Jordans with his fitted tee and Gucci jacket. It’s changing the trajectory of what it looks like to be an agent.” 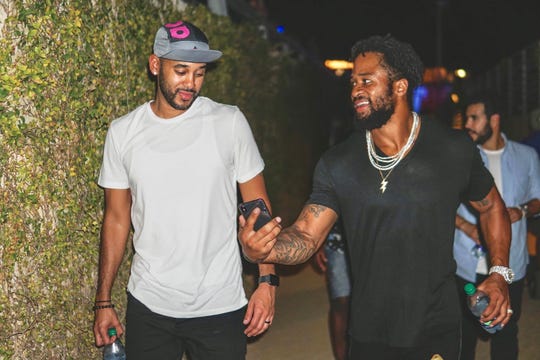 Mulugheta didn’t intend to become an NFL agent. Growing up, he didn’t play football much less know what a sports agent was. He wanted to be an entrepreneur or pursue corporate law.

“When kids see someone who looks like them in these roles, they think ‘OK, that’s something I might be able to do,’” Mulugheta said. “I never saw anybody that looked like me that was an agent.”

But when Mulugheta visited his best friend Jamaal Charles ahead of the 2007 draft, the Texas running back's agent, Andrew Kessler, saw a 24-year-old he considered bright, loyal and authentic.

“Any good adjective you could think of for an agent,” Kessler told USA TODAY Sports. “That really nice balance between someone who you really enjoying being around and also have a lot of respect for.”

Kessler invited Mulugheta to intern with Athletes First that summer, ahead of Mulugheta’s first year of law school. Mulugheta joined the agency full time after graduating from Nebraska. Building his clientele, Mulugheta relied on the values instilled in him at home. His parents “had to work 10 times harder just to get to a place of sustainability,” Mulugheta said. Neither one graduated high school, but both demanded academic excellence from their children. Their three sons each earned a bachelor’s, plus a collective two law degrees and MBA. Their daughter, the youngest, graduated from Harvard and has deferred acceptance to Stanford’s MBA program.

“Everybody’s proud of each other,” Mulugheta said, “but it’s expected.”

Mulugheta treats his high-achieving players – 11 Pro Bowlers, 11 first-round selections since 2013 – the same. Who wants to be on vacation with seven Pro Bowlers when you’re not one, they ask themselves. Collins describes the dynamic as a friendly competition, uplifting peers even as they suit up for different teams. He feels mixed emotions when a fellow Mulugheta client thrives against him.

“Say Earl catch a pick against me or my team or something,” Collins said. “I’m like, ‘Damn, that boy done throw that pick.’ But I’m happy for [Thomas] because he got a pick. Now I got to go out there and do the same thing or get a turnover. Do something crazy.

‘At the end of the day, right is right’

Off the field, Mulugheta and his players team up. Take April, when Jaguars executive vice president of football operations Tom Coughlin publicly criticized Ramsey for not attending voluntary workouts. Ramsey was training in Nashville, his hometown, while spending time with his pregnant girlfriend and their under-1-year-old daughter. Ramsey and Mulugheta game-planned a response over FaceTime. Their conclusion: Perception is reality. If the team takes a matter public, so will we. No need to idle while a team official spins a narrative.

“At the end of the day, right is right,” Mulugheta said. “If I think someone’s attacking one of my guys unfairly, then I’m not afraid to speak out about it and hold them accountable.”

Mulugheta tweeted clarifying that the Jaguars knew where Ramsey was and why. Ramsey added that he didn’t “HAVE to be there BUT they know the EXACT REASONS I am not. My teammates know it’s ALL love and know I’ll be ready when it’s time.”

To be clear, Jalen Ramsey is exactly where Jalen should be during his off season. He’s spending time with his young daughter & family while training in his hometown of Nashville. In addition the Jags are fully aware of why he is not taking part in the voluntary off season program

“Fully aware” & “voluntary” meaning I don’t HAVE to be there BUT they know the EXACT REASONS I am not. My teammates know it’s ALL love & know I’ll be ready when it’s time! ? https://t.co/NASgnu6egT

Collins tweeted that if Ramsey didn’t want to play for a team that’s “all in the media, all in your mentions, talking about voluntary workouts and questioning your work ethic…then come to the Redskins.”

Ramsey clarified that he didn’t ask Collins to chime in. But battle one of Mulugheta’s family of players, Ramsey said, and risk a response from all.

Mulugheta watches every snap of every game in which his 31 clients play, he said. He visits their games regularly and catches whomever he missed in Monday and Tuesday night film sessions that often stretch from 9:30 p.m. to 2 a.m. A guard shifts to tackle on one play? Mulugheta asks his client why. A safety didn’t record a tackle but stuffed a run to blow up a play? Mulugheta takes note.

“He definitely texts or calls us like, ‘Hey man, what happened on this play?’ or ‘Why they got you doing this?’” Collins said. “All the questions in the world [to] see what he can do for us to put us in position to make plays and be the best us we can be.” 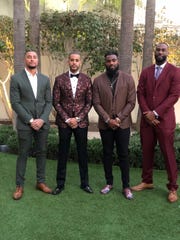 Empowering his players can entail negotiating a deal at one moment and breaking a lease at an apartment complex after a sudden trade the next. It also can include wealth management lessons: Mulugheta shows up to functions rocking a suit from Macy’s to show players he’s “the sharpest guy out there,” Collins said, but “don’t need to spend his money to look good or be fashionable.”

Mulugheta considers clients’ life after football. He and Thomas partnered with their fraternity brother, Greg Grovey, to open an Austin shoe store, the first minority-owned business among more than 120 stores in a high-end retail development. Mulugheta applied his “expert negotiation” skills, Grovey said, to secure the store a better property rate. Mulugheta is proud that the establishment, Kicking It ATX, enables black children in Austin to see store owners who look like them – just as he aims to do for minorities hoping to crack the agent world.

Mulugheta delivered that message to Lynn at this year’s draft in Nashville.

Lynn remembers stepping off the red carpet and into the green room, awaiting to find out where her top client, Alabama defensive tackle Quinnen Williams, would be drafted (Jets, third overall). She eyed couches, buffet tables and the longtime agents – predominantly white and all male – whom she couldn’t believe she was joining for the first time.

Then Mulugheta, in the green room for the seventh straight year, greeted Lynn with a hug and congratulations. Instantly, she felt more at ease in an industry where “we’re not doing deals with people who look like us,” Lynn said. “He didn’t have to do that.”

Nor did Thomas and Collins have to buy Mulugheta a new wagon for their deals, but that’s how they wanted to recognize an agent whom they see as representing them in more than just contract negotiations. Ramsey called Mulugheta “pioneer, honestly, in what he’s doing for black people and for agents in general. The deals he’s doing are way ahead of his time.”

But Mulugheta wants to remain relatable as he advances. Thomas isn’t six years younger than Mulugheta; Haskins is more than 14. Relative to his players, Mulugheta is aging out of the “young black kid” label. But as they listen to the same music, wear similar clothes and raise children alongside each other – players are Mulugheta’s sons’ godfathers, as he is for their children – the family ties stay strong. Challenges shift.

Mulugheta wonders how he’ll instill in his three sons the same work ethic his father instilled in him when for his sons, sleep is never for dinner. He teaches them discipline as he drinks beet-and-kale juice in the corner of their jiujitsu gym, in hopes it reminds him to stay healthy during the roughly 100-plus nights a year he spends on the road. Mulugheta credits his college sweetheart, wife and “backbone,” Chondra, for making that schedule possible as she holds down the home with DJ (5), Dallas (3) and Davin (1).

And yet, Mulugheta said, this is exactly why his parents came to America.

“What people have always considered the American Dream, right?” Mulugheta said. “Someone coming from nothing, having the opportunity and making the best of those opportunities.

“The way I handle my job and how I operate is different than what I see from other people – not that it’s better or worse but it’s different. I’ve kind of created my own lane.”