Home » NFL » Who is in the 2019 Super Bowl: Starters, rosters, key players for Rams vs. Patriots

Los Angeles has the glitz, but New England has the legacy.

Now, it’s time for both sides to meet and prove just who belongs as world champion.

After a historic day of conference title games, both of which went to overtime, it’s the Los Angeles Rams vs. the New England Patriots in Super Bowl LIII. On one side, we’ve got new-school stars from the West Coast — hotshot coach Sean McVay, California quarterback Jared Goff and possibly the NFL’s best running back Todd Gurley. On the other, we’ve got old-school champs from the East Coast — everyone’s favorite villains in Tom Brady and Bill Belichick, who have conquered Father Time over and over again to secure their ninth career Super Bowl appearance.

As we prepare for this year’s fight for the Lombardi Trophy, here’s a rundown of each team’s rosters, starters and key players:

At the center of the offense for much of an MVP-caliber season, Todd Gurley was curiously limited in the Rams’ NFC Championship win over the Saints, taking just four carries and spending almost the entire third quarter on the sideline. That was despite a 115-yard outing in the Divisional Round. Even so, quarterback Jared Goff probably remains the most vital to Sean McVay’s offense, overcoming a shaky start to lead L.A. back in the Superdome and outplay Drew Brees down the stretch.

In addition to Goff and Gurley, here’s the rest of the Rams’ starting lineup on both sides of the ball, as well as key backups and other players who have seen action in the postseason:

There’s no one more famous — or polarizing — than the Patriots’ signal-caller, Tom Brady. Controversies have kept the Patriots’ critics alive for years, but that hasn’t stopped the 41-year-old all-star from racking up title after title. Going for ring No. 6 after a runner-up finish against the Philadelphia Eagles in Super Bowl LII, Brady has already rewritten the record books and enters this year’s culminating showcase with a familiar supporting cast — one that’s starred Julian Edelman and Rob Gronkowski for years.

Here’s the rest of the Patriots’ starting lineup on both sides of the ball, as well as key backups and other players who have seen action in the postseason: 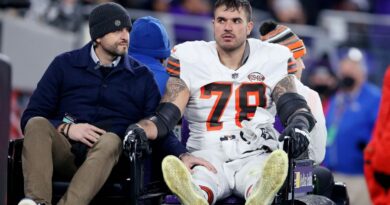 Browns RT Conklin out for game with knee injury

Don't count out Eagles, Cowboys or Bengals for the 2020 NFL season